Battling the revenue shortfall: The dilemma of 18th Amendment

The recent remarks of the Honorable Premier Imran Khan about some points of the 18th amendment requiring review deserve some attention. While the remarks were related to the lack of devolution of power from provinces to the local governments, they sparked a general debate once again about our constitutional scheme and federalism in Pakistan – the issue of revenue generation being the most pertinent one. This piece will focus, in the context of center-province relations, on the failure to enlarge revenue envelope after the 18th amendment.

The main argument of the side that wants the amendment reviewed is that the transfer of a large percentage of federal revenues to the provinces after the 18th amendment leaves limited fiscal space for the federal government to invest in human capital and economic development. There is, however, a need to realize that the locus of this problem lies not as much with the 18th amendment itself as it does with a poorly functioning taxation regime both at the federal and provincial levels.

First, despite the fact that all provinces have dedicated institutions to mobilize revenues, the existence of a plethora of parallel taxation authorities has resulted in a coordination gap and scattered data of taxpayers. In Punjab, for instance, three separate revenue authorities i.e. Board of Revenue, Punjab Revenue Authority, and Excise & Taxation Department operate with different jurisdictions and they have no formal administrative connection and information-sharing mechanism. The Cantonment Areas have their separate tax collection mechanisms, administered by MLCG officers working under the Ministry of Defense.

Second, these institutions also lack the necessary collection expertise, administrative capacity, and skilled human capital to meet their objectives and are often dependent on the federal officers to run their affairs. In the absence of necessary human capital and a harmonized working framework, the collective efficiency of these institutions is undermined significantly. 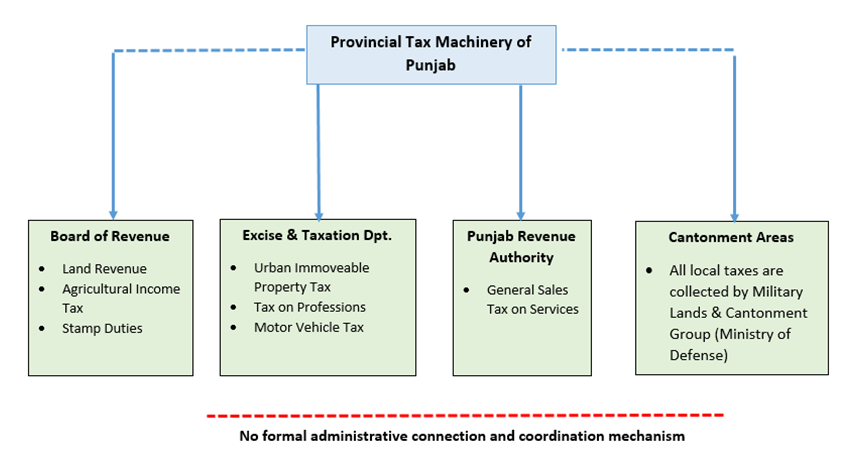 Third, after the devolution of GST on services to provinces, five economic jurisdictions i.e. four provinces and ICT are operating with different regulations and policies. The resulting cumbersome complications create an incentive for businesses to evade taxes. This arrangement causes disagreements over the definitions of goods & services and places a high compliance burden on businesses by requiring them to file GST returns with all five jurisdictions every month based on five different sets of rules. The absence of a Unified Tax Portal with a standardized format for paying and filing taxes is a big hurdle in streamlining the taxation regime.

Fourth, the absence of a robust coordination mechanism between federal and provincial tax bodies results in the evasion of tax at multiple points. To give one example, the evasion of income tax on account of agricultural income by landlords is a recurring phenomenon because FBR does not have access to the data of agricultural income taxpayers that lies with provinces.

Finally, the federal government loses a big chunk of its revenue due to inefficiencies in the federal revenue collection machinery. According to the World Bank, the potential of total tax collection at the federal level is 26% of the GDP while the actual Tax-to-GDP ratio has remained fairly low in recent years even before the Covid-19 pandemic. The existing structural organization of FBR, absence of adequate performance-based incentive structures for tax collectors, lack of security of tenure for the top leadership and lack of autonomy in internal matters on the model of State Bank of Pakistan are some of the issues that need to be addressed in this regard to enhance the functional capacity of FBR.

The proposal for the establishment of the Pakistan Revenue Authority (PRA) by the current government, notwithstanding the haphazard manner in which it was presented, did have some merits from a functional point of view. The consolidation of all fragmented revenue authorities at the provincial level in a single authority and establishment of an effective coordination mechanism between the provincial authorities and FBR organized along functional lines are commendable ideas. In this regard, however, a few steps must be taken to ensure that the reform process is implemented smoothly.

First, the concerns of the political leadership of provinces regarding the federal encroachment upon the provincial domain must be addressed. In principle, there is no issue in the establishment of PRA since the constitution allows for such arrangements. All the details can be discussed in the Council of Common Interest under Article 153, while the long term oversight can be established through the National Economic Council under Article 156. Our democratic procedures want different points of view to engage with each other through these constitutional forums and they must be put to effective use. Even if there are some legal complications afterward, Article 144 can be utilized which allows a provincial assembly to delete its legislative authority to Parliament on a subject not enumerated in the Federal Legislative List.

Second, the rules and regulations related to GST within all economic jurisdictions must be harmonized on the model of other federations such as the USA by maintaining a balance between the federal-provincial jurisdictions. Some mechanisms can also be devised to give the right to levy agricultural income tax to center and the center can hand over sales tax on goods to the provinces. Third, each province must establish an effective Grievance Redressal Mechanism (GRM) related to tax machinery to increase the trust of the public in the process. One way to do this is by mandating an autonomous office of Provincial Tax Ombudsman strengthened with penal and oversight powers.

Fourth, there is a need to enhance the administrative capacity and technical acumen of the provincial tax authorities by investing in the human resource capital to decrease their reliance on the federal government.

Finally, no coordination mechanism can work effectively without the modernization of the tax collection regime through extensive use of information technology for the detection of under-reporting and understanding the patterns of tax evasion in different segments.

Whatever the reform agenda is, the senior leadership of FBR must be taken into confidence on all matters. The process should be multi-staged, inclusive, and give due weightage to the concerns of all involved stakeholders.

No one can deny the existence of post-18th amendment fiscal challenges. However, addressing those challenges would require a forward-thinking mindset, a spirit of cooperation, and a belief in the idea that a strong federal framework is in fact the right way ahead for our country in the long term. The issue is not the 18th amendment. The issue is the poorly functioning and flawed taxation regime and that is where the focus should be.

Disclaimer: The views expressed in the article are the author’s own and do not necessarily reflect Dunya News’ editorial stance.

The writer is a public speaker, educationist and a former member of Youth Parliament Pakistan

UNEMPLOYMENT OR MISTREATMENT? THE YOUNG-ADULT DILEMMA

A year of Siege in Indian Occupied Kashmir!

How is Ultra-Nationalism Fatal for World Peace?

TRANSGENDER COMMUNITY – A PART OF OUR SOCIETY!