When I was in 5th grade I read a lesson about the Seven Wonders of the World. It was my first time to know about the Great Wall of China which was included in the list. Out of curiosity, I asked the teacher can you tell more about this wall? He told us about the geography, history and some more information but I couldn’t recall the exact words.

Later, when I was in college I heard a lot about the Great Wall, the one quote that I must mention is that the Great Wall can be seen from the moon. Just like many people who learn about this man-made structure wish to see it, I wished the same. However, not everyone has had the opportunity to visit this historical site. That time, I also had no idea that one day I will be on the great wall taking photos with my friends. 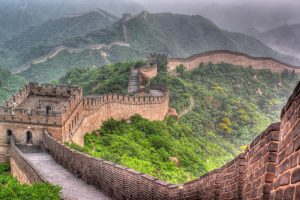 It happened after I came to China for my Master degree. Luckily, every year in September, the international student office of the Communication University of China organize a trip to the Great Wall. When I learned about the trip, without a clutch I signed up.

On the trip day, international students sit in three buses, each bus had a guide. On the ride, our tour guide who was a lady started talking about the Great Wall since it was two hours ride from Beijing to the Great Wall. Happily, I kept open ears to what she said, as followed; the Great Wall of China or Chang Cheng in Mandarin was constructed in 220–206 BC by Qin Shi Huang, the first Emperor of China.

The wall traverses China from east to west. It is considered as one of the Seven Wonders of the World. It has a series of fortification built for the sole purpose to protect the Chinese states or empires against the raids and invasions of the various nomadic groups.

Little of that wall remains however it was rebuilt, maintained, and enhanced over various dynasties; the majority of the existing wall is from the Ming Dynasty (1368–1644). It is globally recognized as one of the most impressive architectural structure in history. It is the longest defensive structure in the world. Moreover, The Great Wall represents peace and unity for China.

She told us, a famous Chinese saying, “He who does not reach the Great Wall is not a man”, one of the students replied, “We are going to become real men today”.  All of us laughed including her, except the driver because he couldn’t understand English. She continued, the Great Wall of China, is a great engineering marvel, and always attracts adventurous tourists from all over the world.

Upon arrival, she added, At least 30,000 people from all over the world climb the Great Wall every day. The fee to visit the Great Wall is 45 Yuan which is approximately 800 Pakistani rupees. She said being on the university trip you don’t need to pay for the tickets, its general information, in case some of you want to visit on your own.

The parking was full of buses, taxis and private cars and many people were standing in long lines to buy entry tickets. Our tour guide gathered us before climbing the Wall, gave us some instructions to follow. She told us that if someone among us feels tired or encounters any health problem they should descend immediately, she also advised us to climb the stairs slow and steady.

However, none of us would think of not climbing to the top of the wall and make history, the only challenge was that we were given only two hours to climb the wall and come back to where our bus was parked. 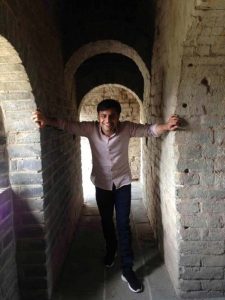 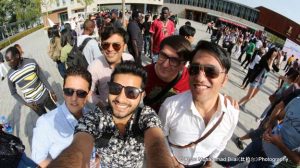 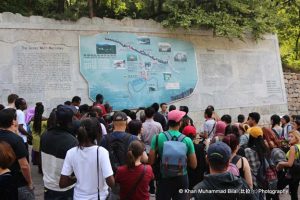 In this Smartphone era, it was impossible to start such a journey without taking “Selfies” or photos, we completed the ritual and started our journey.  As we started climbing the wall, one could see people capturing the beauty of surroundings. Everyone was very friendly, helping each other by taking pictures or sharing water.

On the way up to the wall, we could see the cautions boards across the path refraining us from destroying the environment of the Great wall. The guides were also advising us to maintain the hygiene of the site while minding steps among others.

Though it seems easier to climb those stairs to the top of the wall, it is not as easy to hike as it appears. Those are countless stairs. One among the students said that he counted the stairs and those were one thousand but I doubt it. I personally, found the stairs tiring but looking the joy on the face of those coming downwards kept my strength. 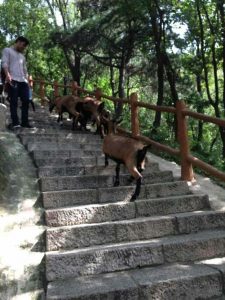 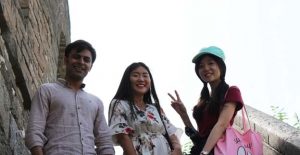 On reaching the first tower, built for smoke and fire signals, I had no idea of the complexity and degree of this manmade construction. Some big canons used to protect ancient China can be seen installed at the beginning of the Great Wall. We reached near the top of the wall.  Walking in the shadow of the Wall, we reached to the final set of stairs; I climbed the last stairs. As I put my first step on the top f great wall, I heard a friend shouting “We became Men”. we all laughed. On the top of Wall, one could get a magnificent view of the long Wall itself and the surroundings. 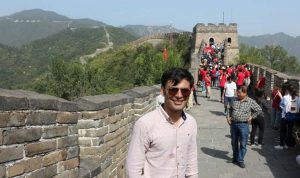 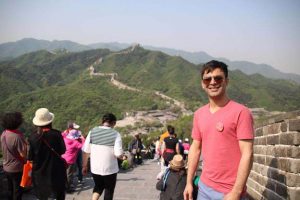 In every  200 meters, there are pavilions which were used as watchtowers to detect enemies. We went into a pavilion, looked through the Balconies, and walked around in the cabins for the guards.

Furthermore, it was relaxing to breathe fresh air from the green forest surrounding the wall. We took memorable pictures, countless pictures. We instantly uploaded those on different social networks. Facebook, Instagram, and some other social networks are banned in China but those were working well on the Great Wall. I have no idea why, how but it was refreshing to use those apps without getting worried about VPN.

Unfortunately, we had very short time to soak in the beauty of great wall. Now, we had to go down to meet our tour guide. On the way back to University, the tour guide told us more about the architectural genius of this historic site. She pointed that this is one of the few tourist spots on the Great Wall. Counting other, like Mutianyu Great Wall, Jinshanling Great Wall, Gubeikou Great Wall, The Jiankou, and Simatai. 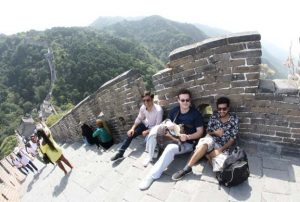 I wasn’t satisfied with one time tour, so, Last month I visited the Great Wall for the second time with my Chinese Friends.

I found myself walking on The Great Wall twice. It was a dreamed trip that was in my mind for a long time, I couldn’t quite believe that I have visited this wonder of the world twice. I feel a need to visit the other tourist spots of the Wall in near future.

The great wall of China is a must-see man-made marvelous structure of the world.  When you will reach here, the view will speak for itself. I would recommend tourist to put it on top of their destinations list.