‘Save the state, not politics’ – How Dr Tahir-ul-Qadri set Pakistan’s priorities straight five years ago

Steven Pressfield in his bookThe War of Art: Break Through the Blocks & Win Your Inner Creative Battles writes that,“The Principle of Priority states (a) you must know the difference between what is urgent and what is important, and (b) you must do what’s important first.”

Setting the priorities right reduces half the struggle, makes the way facile and the outcomes long-standing. The state of State of Pakistan is in chaos and in a fluctuating turmoil, where at times it emerges with a strong image to the outside world, but due to the inbuilt systematic howlers, the image deteriorates and collapses highlighting itsfrailty. Sometimes military coups do the vandalism and, on the other hand, sham democracy makes it more reprehensible and paves an easy way so as to be exploited by any opportunist group, either from inside or outside.

It’s unfortunate that,for quite a long epoch, we as a nation remained unaware of the rudimentary root cause of all the chaos and turmoil and therefore, we were unable to determine the “real enemy”. Political parties have been through a long struggle to determine their writ and space in the political arena and to win the favorable vote from the masses. In that struggle and race, the setting of priorities somehow got upset and what Pressfield writes that “what is urgent” topped the agenda of the political parties and “what is important” got ignored. Party affiliations and personal gains took over the important agenda which was “the State”. The purpose of establishing this state and its democratic functioning and responsibility is enshrined in the constitution, all collectively ignored but a group of elites who have assumed prestigious positions and ranks. They have paralyzed the constitution by steering it in their own way that suits their politics no matter how damaging it is to the state.

The system that runs through their hands facilitates the legatees and in return gets protected. Any face that the problems and challenges assume has a direct link with the incompetent and monopolistic system which lacks the capacity to entertain the rights of people. The problem is the system itself and the solution is the change of the system.

Five years back when Dr. Tahir ul Qadri, Patron-in-chief of Pakistan Awami Tehreek, on his way back to Pakistan addressed a historic gathering at Minar-e-Pakistan on 23rd December, took a right step in the right direction. He educated the people of their rights which the constitution ensures and identified the problem to the core. He, in his speech, set the priority right by raising the slogan to “save the state, not politics”. He made a stunning entry in the Pakistani politics by announcing a million march to the country’s capital in that speech, which made that speech a hot debate in all the mainstream media outlets. The points he raised in the speech have now become a well known fact to even the street vendors. The lawful procedure of holding the elections, its constitutional requirements as per Article 3, Article 37, Article 38 and Article 218 of the constitution were the gist of his speech. 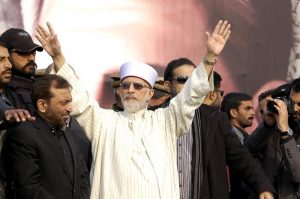 The major emphasis was the constitutional parameter of selecting the candidates, mentioned in Article 62 and 63. After highlighting the root cause of the problem he suggested the solution by referring to the successful experiment of Italy. When European Court of Justice took notice of the corruption scandal in Italy and a Treaty on Stability Coordination and governance was setup. Article 8 of this treaty formed the base of European Court of Justice’s decision to dismiss the government of Italy and an interim government was placed instead. Within one year of remarkable performance, economic and other major challenges faced by Italy were overcome and a free and fair election was held. He sets such a model as a precedence to be followed so that not only the system gets to the track but also this democratic idea would save the state from becoming another Middle Eastern model.

The international and regional scenario demands a sound government who has the capability to withstand the challenges that Pakistan faces. The party politics which we analyze on daily basis have a limited agenda and goals. There is a pressing need to fathom the problem because Watts Humphrey rightly note that “If you don’t know where you are, a map won’t help”

The author is a student of International Relations, currently studying at KInnaird College for Women.