After days of speculation, rumors, multiple stabs in the dark and guesswork which would give Sherlock Holmes a run for his money, it is finally announced that the head of Pakistan Tehreeke-Insaaf, the charismatic and enamoring politician is ready to tie the knot with the lucky gal, Reham Khan.

The announcement came after the heartthrob landed at Heathrow airport in the wee hours of the morning. The eye opening announcement came at a time when most of Khans fan base (yes, we’re talking about the girls with fresh faces) were sound asleep in their beds unaware that the knight in the shining armor had been snatched by the snazzy former BBC weather girl. The news, however, would have woken up the lasses and gals back in the country from their slumber (and even from the graves, excuse the poetic license).

While all of the social media has been in uproar about the alleged denial then confirmation ploy deployed by Khan, which closely resembles Israel’s foreign policy regarding its nuclear weapons, we take a closer look as to why all of Pakistan has taken the matter to the heart (by Pakistan we mean the girls).

Khan’s ability to draw huge crowds at a day’s notice, with a sizable chunk of the crowd comprising of the members of the fair sex has always depended of his aura of single (though not ready to mingle) persona.

What this new development in the former cricketer turned politician’s love life bodes with his electorate? (by electorate we mean the girls) Not a pretty picture, we guess.

And with his (most eligible) status off the table, the pretty faces that feature in Khan’s Jalsas just might take it to the heart.

A colleague of mine (and by colleague we mean a girl) quipped on the situation “in the end, divorced people either get boring or stay divorced”. Me thinks that’s another way of saying grapes are really sour. Would she have found him a lot less boring had she been on the other end of matrimonial knot, the ‘chosen one’ as another colleague puts it? We’ll never know.

Meanwhile the reactions of the twiteratti and keyboard mujahids (and mujahidas) are worth reading, here’s why: 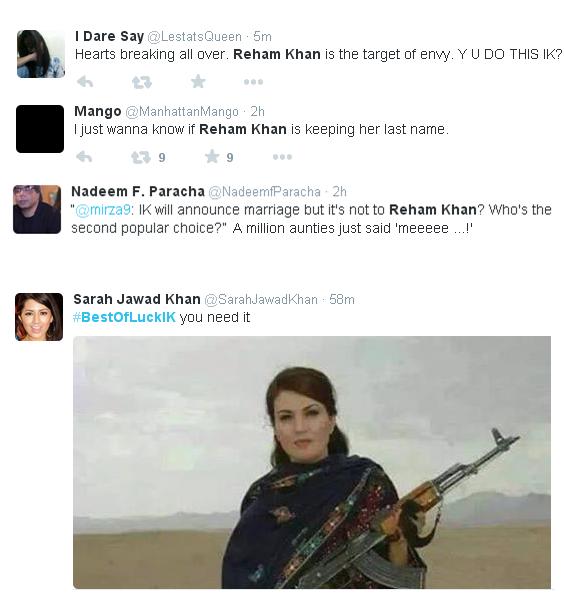 Some even went as far as to suggest the Pakistan’s bhai (yes, the ultimate one) reaction: 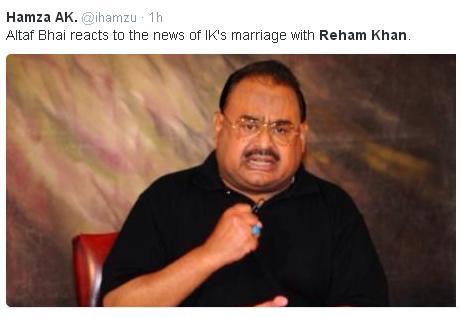 The fan-base of Khan (and by fan-base we mean the girls) in 80s and 90s, many of which are now mother of two (two you ask? bachay do hi achay ), have gone through same trauma when the lanky right-arm golden boy with his shoulder length hair and wrinkle free face was linked with Jemima Goldsmith.

It seems more of a Greek tragedy now that the same ghost of the past has come back to haunt the girls, a generation and many heartbreaks later.

7 things that sell best to Pakistanis