To investigate the evolution of Severe Acute Respiratory Syndrome Coronavirus 2 (SARS-CoV-2), Pakistan is in urgent need of volunteer digital tigers to come forward and contribute optimizing the government’s public health policy. An optimal public health policy is extremely important for a poor country with limited resources to fight this pandemic war. 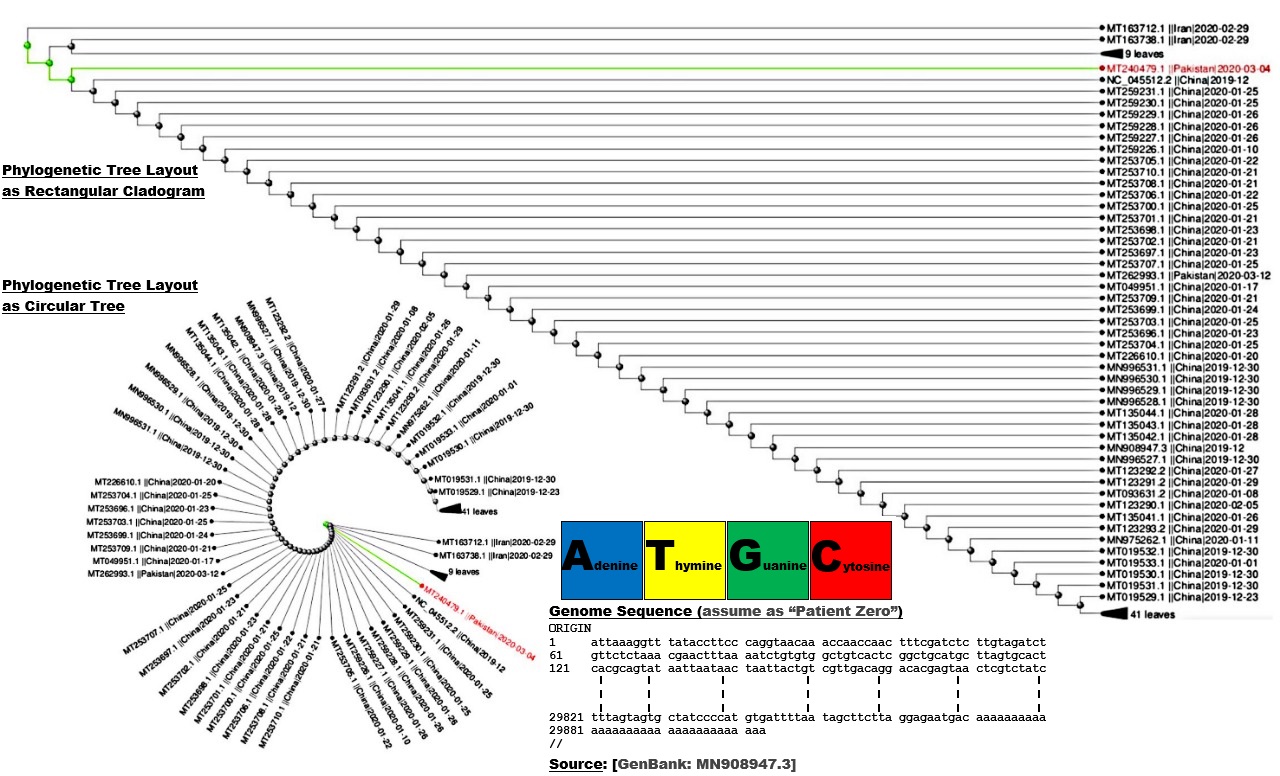 A phylogenetic tree built from the produced genome sequences of collected virus samples can help to track its origin and spread with some empirical evidence.

A teamwork should also accept the challenge of finding “Patient Zero” of the country. The only key required is ambition and passion to debunk the myth of the virus’s evolution in the country and the required tool is a simple computer with internet access to the documented digital database including information about “Patient Zero”. The author writes this opinion-based article to raise awareness about a simple way to track the virus’s origin & spread with some empirical evidence.

As a Muslim majority country, we should not forget “Zikar” and “Fikar” to combat this pandemic. There has been clear evidence that the Muslim scientists did a fundamental contribution to the science of the medieval Islamic world.

The identity of an organism can be assigned by the genome sequence which is also taught in our biology class at a secondary school. A genome sequencing technology can be used to produce a genome sequence of a virus. A genome sequence is fundamentally composed of four nucleotides: “A” for Adenine, “C” for Cytosine, “G” for Guanine & “T” for Thymine. Anyhow, the order of repeated “A”s, “C”s, “G”s and “T”s help producing a sequence, called genome sequence.

People from all over the world use some genome sequencing technology and publish the produced genome sequences of viruses in one of the famous online databases called “GenBank” managed by the National Center for Biotechnology Information (NCBI) located in Maryland, USA. In this online bank, a country-wise published genome sequences can be browsed by selecting the organism, “Severe acute respiratory syndrome coronavirus 2 (SARS-COV-2)”.

On 04.03.2020, a throat swab culture was taken from a 40-year-old Pakistani woman who had returned from overseas five days ago and the first produced genome sequence of the virus was published on 25.03.2020. Pakistan is in an urgent need of publishing more reliable genome sequences to track how the virus is being evolved in the country and it could also help in optimizing the public health policy.

A simple phylogenetic tree thinking can be the answer to figure out the evolving virus issue. We build the tree by selecting 99 sets of genome sequences published from the countries China (82), Iran (15) & Pakistan (2) till 04.04.2020.A simple rule to understand the tree is that the genome sequences separated by a shorter evolutionary distance are more similar to one another than those separated by a longer evolutionary distance. The common ancestors of two Pakistani origin genome sequences can be analyzed from the phylogenetic tree.

In Pakistan, a large time-stamped dataset of the virus’s genome sequences can provide some empirical evidence to debunk the myth whether this virus is directly evolved from bats, escaped from a biological lab or used as a biological weapon. The locally collected and produced genome sequencing dataset is also helpful to consider the genetic factors in designing targeted vaccine for the people of Pakistan. In this age of a genomic revolution, the digital datasets could also be useful to apply artificial intelligence in the emerging field of biotechnology.

As a Muslim majority country, we should not forget “Zikar” and “Fikar” to combat this pandemic. There has been clear evidence that the Muslim scientists did a fundamental contribution to the science of the medieval Islamic world. Unfortunately, the people have lost “Fikar” somewhere and the influential leaders are being emerged accordingly.

Things that will Motivate you: Try during Quarantine