Heaven turned into hell by India: Here is what Kashmiris want

26 January is celebrated as Indian Republic Day. This day is considered as blessing by many Indians but in reality this is not so because of the fact that in Kashmir the basic tenets of democracy are crushed. In occupied Jammu and Kashmir, this day is observed as black day and rightly so. Valley’s residents have been suffering from worst communication blackout and food shortage.

Extremist elements in India do not speak of the atrocities committed by Indian occupied forces but people all around world have been mourning over Indian oppression. Keeping this in view, Pakistani, Kashmiri, and Sikh communities staged a massive protest in United Kingdom. Thousands of British Kashmiris staged anti-India protest on the eve of India’s Republic Day against the rising human rights violations in Occupied Jammu and Kashmir. Kashmiris across the Line of Control (LoC) and in other parts of the world observed Republic Day as Black Day to remind the world that India has snatched the right of vote from Kashmiris since last more than seven decades.

Pakistani government should send clear message to the world that the issue of Kashmir can’t be resolved bilaterally. Therefore, United Nations’s intervention has become vital otherwise this issue can lead this region to a nuclear war.

Protesters across the south and north areas of United Kingdom (UK) gathered in front of Indian High Commission London and shouted pro freedom and anti-India slogans that “one slogan one track  , go India go back” and “we want freedom”.

While addressing the protestors President Tehreek-e-Kashmir TeK UK and a very devoted Kashmiri Raja Fahim Kayani said while pointing towards the Indian High Commission building saying this building is the symbol of violent face of so-called Indian democracy.

“When the people of Indian Occupied Jammu and Kashmir (IOJ&K) have no access to the basic right of vote and internet usage and in such environment India’s Republic Day is a bid to hoodwink the world community. India is not a democracy but it has put the democracy in danger since the abrogation of Article 370 that gives the special status to the IOJ&K. It is India that snatched the statehood , flag, constitution and autonomy of Kashmiris and now Modi government is working to convert the only Muslim Majority state of Indio into minority to settle outsiders in IOJ&K,” President UK TeK Kayani added. 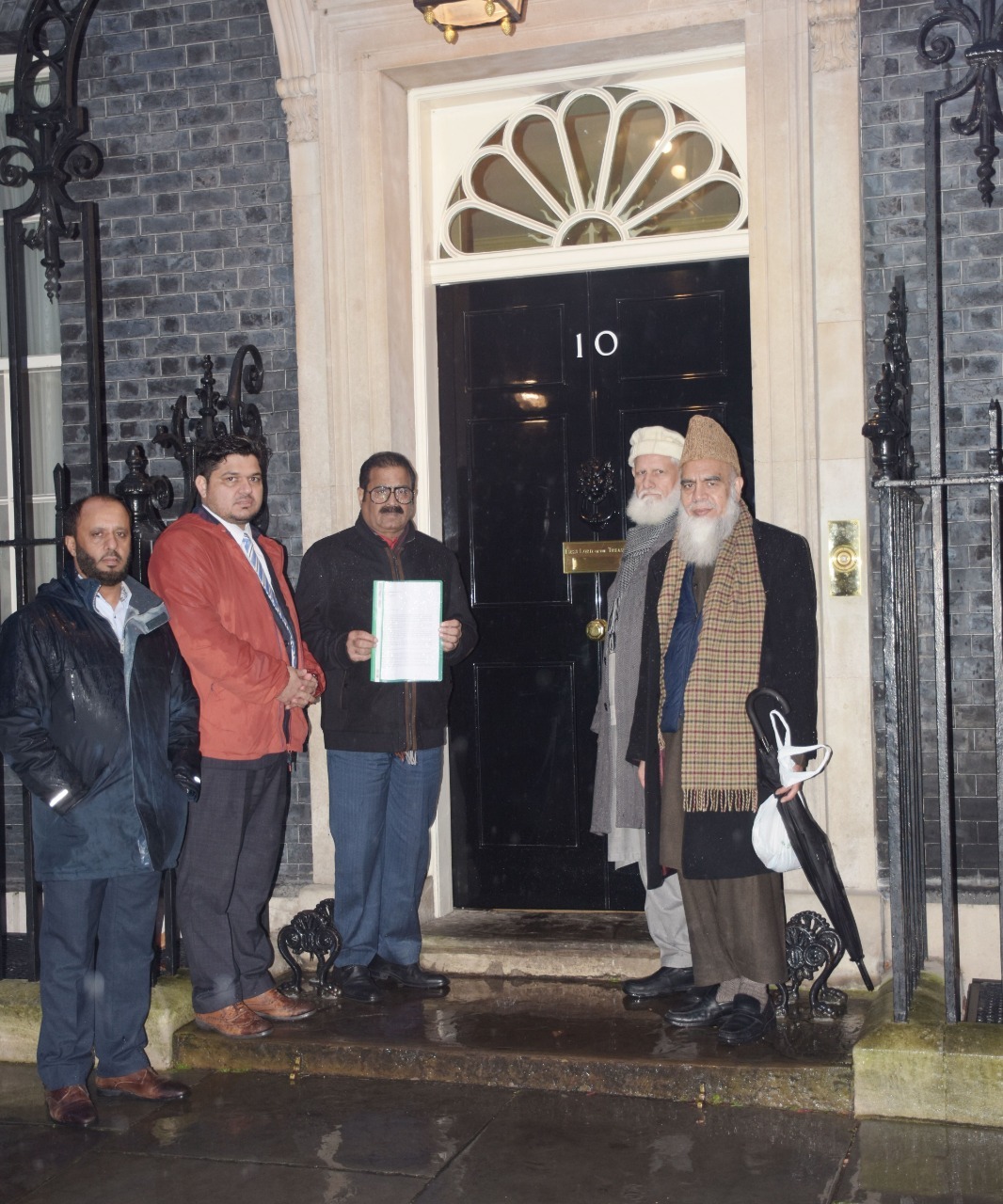 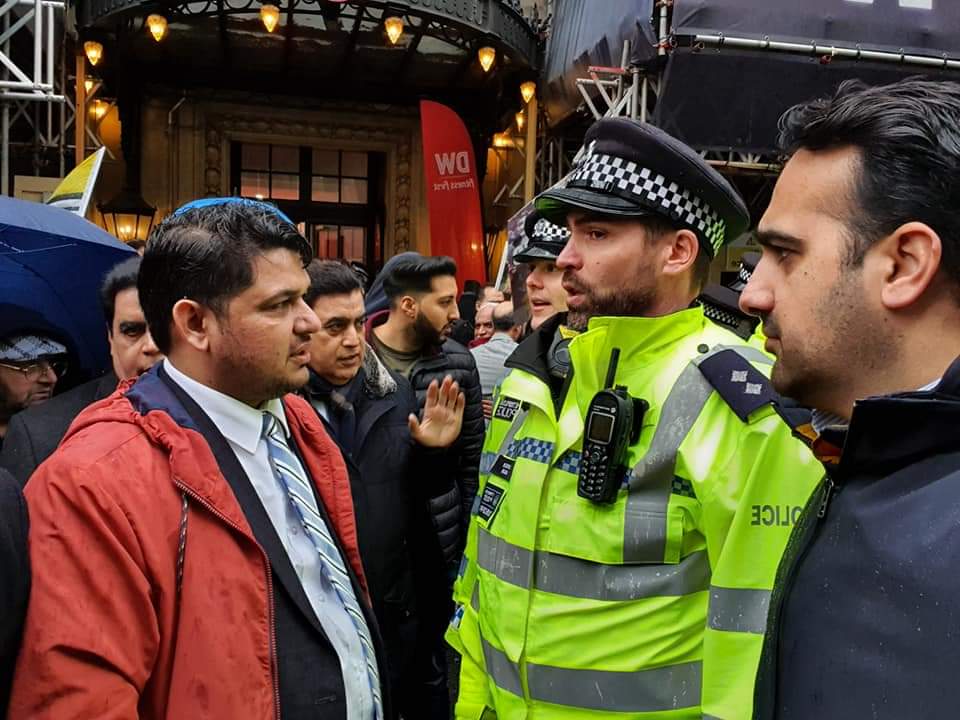 Later President TeK UK Kayani and Opposition leader in Azad Jammu and Kashmir Legislative Assembly (AJKLA) Chaudhry Muhammad Yaseen presented a memorandum to the Prime Minister of UK Boris Johnson at Office of the Prime Minister 10 Downing street and appealed him to use his office to end the siege of IOJ&K that has been laid by the government of India to convert the Muslim majority into minority.

In the memorandum, TeK UK said the people of IOJ&K , their families and the world come out to oppose a fascist, caste conscious regime that has caged millions of innocent people in IOJ&K. During the Second World War the Kashmiris gave their blood and stood up against fascism and again on 26th January 2020  we stand up against fascism before concentration camps start appearing in other parts of India and the world is again plunged into darkness.

On 26th January 2020, is 175 days since Narendra Modi’s government illegally revoked articles 370 & 35A which granted special status to Jammu Kashmir, in effect annexing Jammu Kashmir and breaching all the United Nations resolutions on the disputed region, the memorandum reads. In the memorandum TeK said that Ladakh, in IOJ&K, is an eco-sensitive region that has been turned into a union territory directly under the control of Modi, with no state assembly. A disputed and occupied territory. This strategy will then be employed in other parts of India to take away people’s land.

The beauty of this region known as `paradise on earth` is being destroyed due to the seven decades long occupation.

Curfew has been imposed in Jammu Kashmir. Kashmiri civilians and the entire political leadership and politicians, those seeking union with India and Freedom from India have been arrested detained, Male youth have been detained during night raids, and women have been subject to rapes and sexual assault.  The ill are unable to gain medical access, many have died due to lack of medical care, with many dying in hospital due to the communication blackout. Charities are unable to provide relief.

Pellet gun used by the Indian Army has blinded men women and children. Cluster bombs are being used across the Line of Ceasefire by India killing civilians in Pakistan Administered Kashmir. UNHRC reports of 2018 and 2019 state horrific human rights violations by Indian Army.

Neither Journalists, Human rights organisations nor foreign politicians have been able to gain access since the Curfew. Kashmir has become invisible from the inside to the outside world.

Eyewitnesses, those able to escape  from Jammu Kashmir curfew and currently in the UK report that people are unable to bury their deceased in graveyards, having to bury their loved ones within their homes, their accounts of what is taking place during this 175 day siege are blood curdling. Children do not know whether their parents detained since 05th August 2019 are alive or dead.

“Over a hundred thousand people have already been killed in Kashmir. Under The Armed Forces Special Powers Act (AFSPA) the Indian armed forces can kill, rape and torture with immunity from prosecution, and since promotions and bonuses are linked to the number of people killed, innocent people are killed in fake encounters to gain promotions. These troops will soon be deployed into other parts of India with equally disastrous consequences,” the memorandum reads.

In the memorandum it was also mentioned that the Kashmir dispute is an international issue and Justice for Kashmiris is responsibility of the international community and upon the UK it is a long-standing moral obligation.

Over seventy years the Kashmiris in the disputed region have been denied justice, denied freedom, and we ask that you intervene to enable plebiscite in the entire disputed region to take place.

The TeK memorandum to UK premier further reads that they as representatives of 700000 British Kashmiris, and representatives of those seeking Justice for Kashmiris request that as Prime Minister of UK, which is a member of the United Nation Security Council, that you prioritise Justice, United Kingdom`s moral obligations and humanitarian links with Kashmiris above materialistic links with India for the sake of humanity. And that you immediately call upon the Government of India to swiftly lift the curfew and reinstate articles 370 & 35A, and permit independent UN observers access to IOJ&K , and if it does not then take whatever measures necessary to protect lives of Kashmiris.

What Pakistan should do?

Pakistan government should announce that Shimla accord has been abolished since the Indian government unilaterally scrapped the special status of Indian occupied Jammu and Kashmir which is open contravention to the United Nations resolutions.

The Pakistani government should send clear message to the world that the issue of Kashmir can’t be resolved  bilaterally, so the United Nations’s intervention has become vital otherwise this issue can take this region to a nuclear war.

For effective diplomacy it is very important that the government should reevaluate all the appointments in Pakistan embassies on the basis of their performance and make a cross party delegation of those people who have sound knowledge about the issue of Kashmir and international relations that delegation must represent the official narrative of the Pakistan government.

Muhammad Sulaman Khan is a journalist and associated with Dunya News.

Options for Accountability in Syria!

Turkish Incursion of Syria: Justified or a Violation of International Law?

China-Iran deal – A game changer for both the countries?