Smog in Pakistan – a slow painful death for the dwellers

Breathing clean air is one of the fundamental rights of humans because not doing so might very well be fatal for human life. Diminishing air quality has been a challenge worldwide especially in cities with industrial bases. In Pakistan, as a result of massive urbanization and increasing carbon footprint, smog has taken over the atmosphere of most of our big cities. Lahore’s air quality has been over 300 for most of the day in the last couple of days which is hazardous according to the Air Quality Index (AQI).

While gas chambers used in genocides might not be a good use of analogy when comparing the air quality, it certainly is leading people to slow deaths. According to a 2015 report published by a medical journal Lancet, around 22 percent of deaths in Pakistan are a result of pollution. According to a World Health Organization (WHO) study in 2014, nearly 22000 deaths in Pakistan are an immediate consequence of air pollution with the numbers rising exponentially every year. One might wonder what caused this sudden spike in the density of pollutants in the air. The answer to this question does not point to any one reason.

As obvious as it might be, the main reason for air pollution is exhaust from various sources that contains carbon-based toxins. One of these sources are brick kiln factories that produce bricks by burning fuels mainly coal. Since Pakistani brick kiln industry isn’t developed or remains unchecked, the pollution reduction mechanism is not in place hence the smoke leaves the chimneys unmitigated. The developed and most of underdeveloped world is moving towards the new zigzag technology in brick kilns that not only reduces pollution but is cost-effective too. Experts say that this technology reduces the coal consumption by 40% and produces 90% top quality bricks as compared to the 70% efficacy of normal brick kilns. There are over 20,000 brick kilns in Pakistan but only a handful of them have converted to the new technology which makes it difficult to control the pollution produced.

Furthermore, another major source of the smoke is the exhaust of the vehicles. A vehicle’s health determines the amount of pollutants it releases into the air. While in developed countries where a periodic vehicle health check is necessary for permission to keep driving the vehicle, here in Pakistan, health monitoring of vehicles has been a sorry affair. Every vehicle has a catalytic converter in its exhaust system that reduces the number of toxins the exhaust can release into the air. However, they get choked after a certain amount of time and need to be replaced. In Pakistan, instead of periodic replacement, the rickshaw owners or other commercial drivers just get rid of them allowing unfiltered toxic exhaust which is fatal for any commuter travelling on roads.

Although our local sources of pollution are necessary to mention here, one of biggest reasons for pollution in major cities in Punjab isn’t indigenous. Every year after the harvest season around September and October, stubble remains are burnt in the north western Indian provinces of Punjab, Delhi and Haryana as the poor farmers have no other way to get rid of it. The smoke from the burning remains suspended in the air and even migrate to border areas of Pakistan, including Lahore. This practice causes a drastic increase in air pollution in the winters causing breathing difficulty to everyone. For the last few years, even Diwali which is determined by lunar calendar falls in winters. The excessive use of firecrackers in Diwali celebrations further exacerbates the air quality to as much as 999 recorded in New Delhi this year which is the final limit of the scale.

Now let’s talk about the mitigation techniques to counter the air pollution. The government can start by ensuring conversion of brick kilns to zigzag technology. Another important step that can be made towards improving air quality is the emphasis on vehicle health. Health experts have stressed up the use of N95 face masks that helps in reducing the inhaling of toxins. As these masks may not be readily available, even surgical or cloth masks might be helpful to some extent. Furthermore, it is advised to drink water excessively as the water can easily absorb toxins inside our body reducing the risk of lung diseases. Although face masks are artificial filters of air, it can also be naturally filter by trees. The leaves and barks of these trees absorb the harmful toxins and release fresh oxygen to counteract air pollution. This natural aspect requires a serious effort from the government as between the year 2007 and 2015, the green cover of Lahore has reduced by 72% due to ill-planned construction of the government and urbanization. 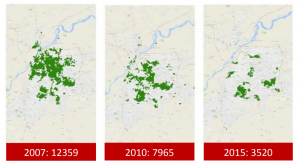 Planting thousands of trees is a Sisyphean task, but we are in luck since it is already in the manifesto of the ruling party’s government. As remarked by Focal Person to CM Punjab on social media, Azhar Mashwani, Punjab government has carried out 2407 inspections, served 1487 notices sealed 86 locations and registered 91 FIRs for those involved in violations. However, the Minister of state for climate change has termed the increased concern about smog “deliberate misinformation”. The seriousness of government about this hanging sword will be tested in the next few months. Nevertheless, the emphasis on mitigating air pollution requires an immediate emphasis from our policy makers in the interest of public health.

Trader community or a pressure group?