The Cost of ASA Protests in COMSATS University Islamabad

It’s been almost a week of faculty strike in all seven campuses of COMSATS University Islamabad organized by Academic Staff Association (ASA) which is unrecognized by the MoST and CUI senate. Faculty members are protesting for job confirmation, OG to BPS scale and health insurance.

The protest was announced right before exams when university was about to complete the Spring 19 session of the academic year. Obviously administration is paying a cost for this which includes cancelled tours of international delegations, research activities, new admissions and require new operational plans.

The cost students are paying far more greater than any other stakeholder can even think about. While talking to various students inside campus regarding this protest, they claimed a constant “mental torture” caused by the revision of date sheet every night affecting their preparation for exams.

One of undergrad students said, “we sleep every night mentally preparing ourselves that tomorrow will be the exam, next morning a circular comes via social media that schedule for exam is revised again.” She further added, “this uncertainty is not affecting my studies but my parents are worried also”

This is not just about exams, due to the delay in the completion of the academic year, students are unable to apply for any two-months summer internships, apply for admissions in foreign universities or look for any jobs. “I was to join a summer internship which is quite important for my career in the first week of next month but I couldn’t because of the delayed exam.”

Some students did some support to the faculty members for their rights but continued suspended activities in the Campus lead them to change their opinions. “We have respect for our teachers, they are on the streets for their rights. But they should also feel our sufferings as well”. Another student said, “we will join them in the strike, can they assure that ASA will also support the students if students plan the protest for fee reduction, scholarships, research and travel grants”.

Dr. Shakir Hafeez, member of ASA, said on social media, “Those who claim that CUI Faculty doesn’t care about the students should know that, the CUI faculty is paying specific percentage of their pays every month for scholarships of students as Taleem Fund”. Does it allow any leverage over students? This was really insulting and shocking statement for most of the students receiving scholarship from CUI. “Most of us are paying heavy fees to CUI that makes their salary, returning a small percent isn’t a big deal,” said a student responding to this tweet. 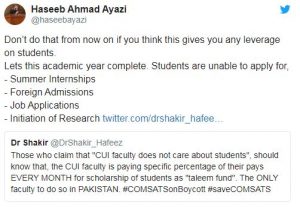 ASA is humbly requested to record their protest in front of President’s office, Parliament, Ministry of Science and Technology or COMSATS Secretariat. “Let it be somewhere else, we will also join” said a graduate student. In recent circular by ASA, pen-down strike will continue on Monday June 24, 2019. I hope and pray for the settlement between administration and ASA. May there be stability in this prestigious University of Pakistan.

What Happened To The Immigrant’s Child?