In May 2019, the news of arrests made on account of human trafficking of Pakistani girls/women and of fraudulent marriages with Chinese men filled headlines in the national and international media. Some solitary incidents had been reported earlier, however, the scale of the abuse appeared to be gigantic which alarmed all concerned quarters.

On May 8, fourteen Chinese were arrested in Islamabad as the Federal Investigation Agency (FIA) continues its crackdown on a gang allegedly involved in the trafficking of women to China for prostitution. Three Pakistani girls were recovered from the gang.

On May 7, a team of FIA raided a house in Rawalpindi and rounded up seven persons, including three Chinese nationals, involved in smuggling of Pakistani girls to China.

On May 6, eight Chinese men were arrested in a private housing society in Lahore on charges of marrying Pakistani women. The FIA Lahore said that those arrested were part of a gang which included three men and a woman from Pakistan too. The further investigation is under way.

Earlier, the FIA raided a marriage ceremony in Faisalabad and arrested the Chinese groom, identified as Chang. Zahid, a fake pastor, Kashif, a matchmaking agent, Mendes, a Chinese girl, and others were also arrested. The FIA smelled the trafficking of Christian girls to China on the illusionary marriages. Similar, arrests are made in Gujranwala and other parts of the country.

A mafia is active in various cities of Punjab. A gang member, named Candis, has been arrested from Lahore as the leader of the gang. Girls aged as young as 13 years old were rescued from the gang. FIA sources said that this arrest will lead to the network of the gang.

Saleem Iqbal, a Christian social activist who lead the discovery of this phenomenon, stated that he first began to notice the marriages in October 2018. “My estimate is that over 750 girls have been married off involving Chinese men”, he said. He also informed the ministry of Human Rights and Minorities Affairs Punjab. He addressed a press conference at press club Lahore disclosing that the entrapped women and their families were made to believe that the Chinese men were rich. They were doing business or working on China-Pakistan Economic Corridor (CPEC) or Beijing’s Belt and Road Initiative in Pakistan.

Human Rights Watch reports that the families of these women and girls received payments of 400,000 Pakistani rupees (US$2,800) and were promised 40,000 rupees a month ($280) in future payments, plus a Chinese visa for a male family member.

A report revealed that middlemen prey upon the Christian Community in marginalized localities, in particular. Roadside banners and posters were seen inviting families to marry their girls with Chinese in Yuhannabad- a settlement housing a large Christian community in Lahore. The banners read: “Long live Pak-China friendship! Attention honorable Christians. Proposals of deserving, poor and good families are urgently required for China. Chinese family will bear all expenses. Education is not a problem.” 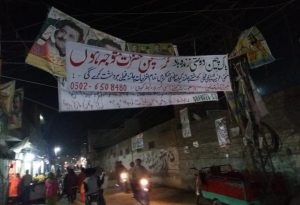 The government of Punjab seems to be aware of the challenge. “It is human trafficking”, said Ijaz Alam Augustine, the Minister of Human Rights and Minorities Affairs in Punjab. Augustine urged the Chinese government and its embassy in Pakistan to scrutinize visas application from the Chinese nationals in his letter reportedly written to the Chinese Government.

The Associated Press interviewed more than a dozen Christian Pakistani brides and would-be brides who escaped before exchanging vows. All had similar accounts of a process involving brokers and members of the clergy, including describing houses where they were taken to see potential husbands and spend their wedding nights in Islamabad, the country’s capital, and Lahore, the capital of Punjab.

However, Chinese Embassy in Islamabad diluted reports stating, “Both China and Pakistan adopt rule of law and firmly oppose human trafficking and sale of human organs. The Chinese government also strictly prohibits any organization or individual from buying or selling human organs in any form, or engaging in such activities. For those who constitute a crime, criminal responsibility shall be investigated in accordance with the law.”

Pakistani government should be alarmed by recent reports of trafficking of women and girls to China. These allegations are disturbingly similar to the pattern of trafficking of “brides” to China from at least five other Asian countries. Journalists have documented similar forms of bride trafficking from Myanmar, Cambodia, Laos, North Korea, and Vietnam.

In China, the ratio of women has fallen steadily since 1987. Researchers estimate that China now has 30 to 40 million “missing women”, an imbalance caused by a preference for boys and exacerbated by the “one-child policy” in place from 1979 to 2015, and ongoing restrictions on women’s reproductive rights. This gender gap has made it difficult for many Chinese men to find wives and fueled a demand for trafficking women from abroad.

A number of Chinese nationals are believed to be residing in Pakistan following the construction of CPEC. Some of them have bought houses and cars. Together Pakistan and China government should be alert of the criminal factors and take special considerations while issuing visas and other documents. The criminals cannot be allowed to impact the economic activity between two countries negatively. Ultimately, it can be a security risk for both countries.

These revelations have alarmed and angered most Pakistanis which might have serious implications on the relationship between the people in two countries. Hence, governments in Pakistan and China should act to bring justice to trafficked Pakistani women and girls those are at risk of sexual slavery in China and take effective measures to end bride trafficking. The government of Pakistan should take thoughtful notice of this exploitation of the poor girls as many of them are forced reportedly into prostitution after their weddings.

The government should launch a conclusive crackdown and save lives of the poor girls who were lured with promises of a comfortable life. The illegal matchmakers showing Chinese men converted to Christianity or Islam had simply lied to people who wished to see their daughters happily married – under simplistic and self-damaging illusions of prosperity.

Writer is a human rights activist and trainer with a focus on UN Mechanism and Child Rights. She works with Sanjog. She can be reached at nabila_feroz@hotmail.com. She tweets @NabilaFBhatti.

Constraints In IT Industry Of Pakistan

Save Water: Secure The Future!