Awareness Is Empowering – Say No To Workplace Harassment

How can we empower our women in the existing discriminated and conservative society?

While looking for some details I came across some farfetched certs. According to the Pakistan Economic Survey, overall literacy rate of 2015-16 declined from 60% to 58% in 2017-18, with literacy rate of males 70 percent and only 48 percent of females. Out of this low literacy ratio less than 3% women actually come forward to work side by side in a manmade society. There can be many ways of shielding and empowering women; the strategic part is educating the girl child. It’s a society where rights of getting education for our girls are always sacrificed in rural areas of our country. Whereas, astonishingly educated women; even in developed cities are still under severe economic pressures.

Majority of the working women step out with a burden of bread and butter for their families. Their dreams are intentionally deployed to support their married life. Such a misfortune; many of our working women are forced to quit their professional careers soon after they conceive for the continuity of race. Adding salt to the wounds with such emotional trauma she might be facing harassment at her workplace. Thus, inconceivably it is equal to impossible for us to produce a strong individual in such scenario.

So what does harassment precisely mean?

Instead of giving my own acuity I went for a public opinion by posting this question on Facebook’s public groups. By selecting repeatedly given answers I shortlisted few as:

Certainly, the harassment may possibly be directed at you, but it can also be directed at someone else or even at no-one in particular. Is has nothing to do with you but you still find it invasive. Sexual harassment is conceivably the experience that, regardless of how it’s outlined, is found in almost all cultures. Its quiet pervasive to both organized as well as in unorganized work sectors. It may vary from culture to culture in terms of intensity and recognition.

While digging out information about the particular issue I ran into mind boggling facts. In Pakistan crime rate is horrifically increasing for last two decades. Resultantly, every passing day we become acquainted with another incident of sexual abuse, honor killing, domestic violence, and work place harassment. Such crime fraction has induced insensitivity in our society. Recently the matters of work place harassment have gained attentions of many social activists and especially law enforcement agencies.

However, it attracted lots of attention from government as well. Knowing the fact that in our country work place harassment was one of the poorly attended issues Protection against harassment at workplace act was passed in March, 2010. This Act requires recognition and salutation for fetching this as a spark of hope to Pakistani women as well as men. There is an utmost need to reduce the gender gap at work places. The law requires all public and private organizations to adopt an internal code of conduct to provide a safe and secure working environment for women but interestingly, many organizations have yet to even know of the Act. 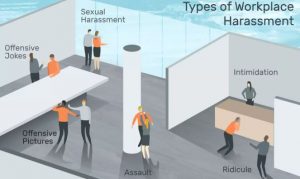 Saira Ali (pseudonym) a 30 years old single mother shared her story of workplace harassment. With grief she said “I am a career oriented women, but my boss created an uncomfortable environment at my work space. He kept on forcing me for gratuitous favors outside the workplace. After facing the worst depression and fear of losing the job for three weeks finally, I left the job and never went for legal protest”. Out of her experience she considered “lack of awareness is the basic reason behind the silence of many harassed women at workplaces. Fortuitously there is a law in our country protecting their right of working alongside. It is unfortunate that in our society we have created boxes around our girls. These applies are the barriers which don’t allow them to speak about harassment openly. Therefore, in most of the sexual harassment cases women are forced to keep silent for family honor and so called social slandering.

Awfully, in Pakistan there is a self-made religious interpretation of modest women and their limitations that is always debatable though. We still daydream for our women to participate equally to progress. Practically we are not doing anything to protect them from being harassed by the male dominating society. Our society is still not ready to accept the importance and potential of women.

Tara a nurse by profession shared her story of a toxic culture of phylogeny. “On a very first day of my job I was harassed by a senior doctor. I shared my fear with my colleague who warned me to stay silent if I want to endure my job. The verbal slur and harassment has now become the part of my job”.  There are certain roles that our society have already labeled and allocated to our women. It might be a good house wife, school teacher or may be a nurse. Our society is still not ready to produce ultimate authorities and senior management positions for women. Our society is challenging our women in every field of life, where they are already facing an extreme gender discrimination, domestic violence, physical abuse, molestation and exploitation. Workplace harassment is by no mean a recent phenomenon.

We all know that in Pakistan women’s strong participation in any sect of life is being criticized. They have to face discrimination and harassment in many forms. Especially for those who want to pursue a career in power, leadership and politics circumstances are more challenging. In the recent past, when a sitting Prime Minister of a country Mohtarma Benazir Bhutto was expecting her second child, she faced the worst gender discrimination. A campaign was sprung denying ‘Prime minister cannot take a maternity leave’. Sadly in such consequence she had to go for an elective C-section while being in the Premier’s office.

We need to tame our minds and accept the fact that there are two major genders men and women, and we cannot succeed and progress without the equal and productive participation of both the genders. Women of our country have to develop a sense that no one can make you feel inferior without your consent. With the enactment and the amendment to Pakistan penal code Section 509, both in 2010, the real and foremost challenge is the implementation. We need to get out of the box that sets a barrier and limitations for one gender and opens up for the opposite sex. When women at any work place are harassed by any mean, sadly they are asked to be silent. We need to educate our girls and women to be courageous enough to stand high for their basic rights, from getting education to acquire a good position in any field of work. Furthermore, she needs to be aware of the facts on how and when to use the law that safeguards her dignity at workplace environment.

While reviewing available information on such cases I perceived that the judicial process for such cases is not concealed and obscured. The existing judicial practices in such cases are exposed enough to catch a journalistic eye. Dreading such practices, majority of the victims undermine their right for justice. Pakistan People’s Party (PPP) took a momentous step by passing an Act, Ordinance in 2010. The Protection against Harassment of Women at The Work Place Act 2010 is perhaps a milestone. Auspiciously, the real and foremost relief is the secrecy of the victim. It remains impartial and uses the term ‘person’ while relating the victim of harassment. The fatality upon harassment can submit a complaint to the inquiry committee at their workplace or directly to the Ombudsman Secretariat. The decision taken by Ombudsman (Mohtasib) is the final word, it cannot be challenged at any court of justice (can only be challenged by president or governor). Irrespective of a man or a woman, the Act will help you confront harassment at workplace.

The writer is an Islamabad based freelance journalist focusing on social issues. She can be reached on twitter @FarzanaYasmeenn