The world day for Audiovisuals Heritage takes place every year on 27th October. This dedicatory day was chosen by UNESCO in 2005 to raise awareness of significant and preservation risk of recorded sound and audiovisual documents.

Living in Pakistan, very scarce people discern about this day, while many organizations esteem the edifice and the array of UN and UNESCO. However, no organization evokes such days, which are supposed to be eminent with some assemblies or some precise proceedings.

Many known organizations of the world like Association of Moving Image Archivist (AIMI), International Council of Archives (ICA) and International Federation of film Archives (FIAF) celebrate this day with great ease. On this day, they recall the old films, sound and video recordings, radio and television programs. They summon up these things as Heritage.

Word “Heritage” means the things, which are taken during inheritance. Every production and field have some gears as Heritage. Literature industry will be having some old literature books, sports heritage will surely be the old sports equipment, same goes in music industry.

On “World Day for Audiovisuals” the celebrating organizations and people reminiscences the old recordings of films, radio or Television programs. They do recollect the old patterns of playing a movie or recording something. They keep memories of these things as a tribute to the OAPs of their industry. 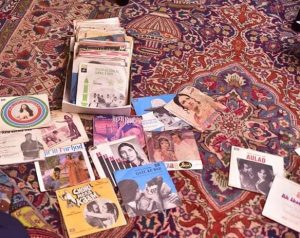 Coming on the day, 27th October was the day when we gathered for the “World Day for Audiovisuals”. I participated their as the Secretory General of Youth General Assembly along with the President of Youth General Assembly Fahad Shahbaz. We spent almost 3 hours there, which were full of knowledge, adventure and fun. Every partaker enjoyed the session with full emotion.

Mr. Tahir Yazdani was our host for that day. He treated all the partakers as his own children. His way of uttering the things in detail was just flawlessly awesome. Sometime during conversation, we slid from our topic. However, that was also a fun thing. No matter on which topic you are asking, Mr. Tahir always had an answer to that. No matter that whether it is some religious, history or political topic; he always came up with a brief, detailed and informative answer to that one.

Last but not the least, the scenery there at “The Lahore Heritage Club” was just eye caching. Mr. Tahir has a huge collection of old Radio, television, Movies, Piano and much other equipment.

“Zindagi Tamasha” should be released without delay