The Pakistan population in 1947 was 34.4 million which has increased to 207.800 million according to the provisional figures of the 2017 census. Amidst intense political wrangling and a show of national indignation over International Bigwigs, a more important issue affecting the future of this country has gone almost unheeded. Pakistan inherited many chronic problems at the time of its inception. Problems like illiteracy, poverty, unemployment, corruption, lawlessness, political instability, poor infrastructure etc. were uncalled gifts for Pakistan. As with most socioeconomic issues of the country lack of attention, procrastination and complacency have managed to bring a fairly manageable problem to an unsustainable level. Pakistan’s population growth rate is at a staggering 2.4% that is at least double of other regional countries like India, Bangladesh and Sri Lanka. In this day and age, Pakistan’s population has reached around 210 million making Pakistan 5th most populous country of the world, after China, India, USA, Indonesia, and surpassed Brazil, Japan, Bangladesh, Nigeria, South Korea, Russia etc.

In terms of land area Pakistan is 34th and shares 0.6% of the world area and in terms of Human Development Index, it has 150th position in the world.

With abysmal human development indicators, this population explosion presents a most serious challenge to the socioeconomic stability and security of this country. With 60-65pc of the population under the age of 30 and fewer job opportunities, it is a disaster in the making.

The whole world is in the grip of overpopulation. It has crossed the seven billion mark. After terrorism, the population explosion can be called the biggest problem the world is facing today.

We come across the often repeated phrase, “Population Bomb is ticking”. There are numerous threats to Pakistan including military threat from neighboring enemy country like India, the economic threat through rising international debt liabilities, drug addiction, ideological threats, provincialism, sectarianism, terrorism, corruption, political instability, disturbed political conditions, heightened security concerns, unstable law and order situation, soaring oil, food and other commodity prices etc., but the real threat to peace and development of Pakistan is the growing problem of “Pakistan Explosion” along with its serious and grave consequences.

If the population of the country continues to grow with the same rate i.e.2.4%, it is likely to double in next 37 years, making Pakistan 3rd most populous country of the world; whereas land area will remain the same rather will be reduced due to residential plans.

Failure of proper implementation of government’s population planning policies is the major cause of population growth as our contraceptive prevalence rate instead of increasing is decreasing and at present it is 30-35%. Another reason is that government did not have a monitoring system in place to regulate health centers or keep records of the population growth.

Free distribution of contraceptives, increased access to sterilization and edicts from religious leaders is doable given the right amount of government/institutional backing must be provided. Otherwise if this already out of hand growth rate is allowed to increase further then sustainable economic growth will remain little more than a pipe dream. Remarkably, while so many parts of the world have seen a reduction in fertility rates and population growth, Pakistan’s growth rate has increased. Pakistan’s fertility rate is among the highest in the region. Indeed, this is a scary situation. But is anyone bothered? 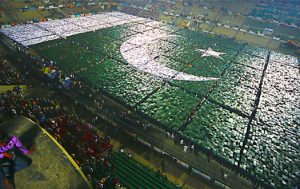 Agriculture is another sector, which has been adversely affected by the rapid increase of population. About 70% of Pakistan’s population relies on agriculture sector. Overpopulation is even having an adverse effect on agricultural outcome. More population means smaller farms and that leads to a decline in productivity. The same happened with the forests and also with the availability of fresh water. We are already a water-stressed country with no big dams and water reservoirs.

“Pakistan will remain a low-income country even after 30 years when it turns 100, if it does not control the exploding population bomb,” said Illango while speaking at a seminar. For the next 30 years, there are two possible pathways for Pakistan’s economy and two different futures, he added. The recent population census revealed a number of 210 million. If we project that to 2047, then Pakistan’s population will be 405 million people, he added.

The World Bank official said that the next 10 years are critical to lay the foundation for a more prosperous economy when Pakistan turns 100 years old. This miracle can be achieved in a generation. The United Nations Population Division estimates that ‘by 2025 nearly’ half the country’s population will live in urban areas. Pakistan, being one of the country’s most vulnerable to the effects of climate change, has to bear the consequences of the increasing population. The existing environment management capacity cannot sustain such a large population if it is to provide a good quality of life.

Meanwhile, for a country confronting violent extremism, such a high population growth rate and huge youth bulge with apparently shrinking economic opportunities make it far more difficult to deal with the rising menace of militancy. An illiterate and unemployed population provides ready made volunteers for militant groups of all hues.

Despite the adverse effects of rapidly growing population, the government can mitigate these effects and can achieve control on population. Following are some suggestions:

Dr Zeeshan Khan is a medical doctor by profession. He is a motivational speaker, content writer, freelance writer, certified trainer and poet. He tweets @DrZeeshanKhanA1.

PTI: Are They Doing It Wrong? Or Is The Media Being Too Harsh?