In movies, TV shows, books or most probably in real somewhere we have all heard it being said, both or one of the parent being distressed over the birth of a girl. No more it’s part of past but yet conspicuously happening around us, yet I have come across very few people who actually want their first child to be a “girl” and feel proud over her grooming.

Since centuries now women have played role in not just upbringing children but also upbringing whole societies. As a mother she is the first one new infant develop a feeling of belonging to, she’s the one child feels safe and secure with even as an infant with no emotions yet developed. The bonding in between does not start with birth only but long before people realize, its 9 months of pre-birth relation already between a child and a mother.

Early marriages are not uncommon in countries like Pakistan and India where women are paired to men of her parent’s choice either at birth or if she’s lucky enough to not be the reason of agony for parents, in such case deadline is extended till 12. An age where the girl has subtle seen nothing but boundaries of her house and love of parents is supposed to leave everything behind and move to stranger’s house where prolong woe awaits her. Marriage is basically too sacred and way beyond just living together, it’s bonding of friendship and supports two individual shares with consent for the remaining life. Consent, unfortunately, is only taken of men and women’s choice is already considered yes and does not count even if it’s a no.

It is unfortunately amusing how religious clerics present the birth of a girl as mediocre and disgracing for parents. Perhaps they have studied utterly modified version of Islam, which allows building a flourish and ostentatious forte at the birth of a boy and resentment at the news of baby-girl’s birth. Life turns too daunting which in most cases women endeavor today and often cite “Jesi Allah Ki Marzi” (as God’s will). In tons of cases it’s also seen as mature and called educated girls accepting this pressure of society happily because it’s deep inculcated into them that men are the only bread and butter earner and women do not need degrees as kitchen work does not demands it. 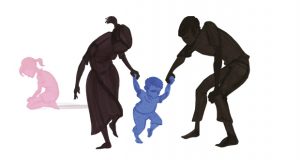 Hazrat Khadija (First Wife of Holy Prophet P.B.U.H) is yet precedent for such women who single-handedly ran a business in those barbaric days which conspicuously clears that religion does not repel women doing more than just kitchen and household job, there’s more to their life, more than what they are taught. Saudi government banned women from driving for years and later lifted the ban. One should ask at first why was it banned and if there is the reason why the ban is not there anymore?

How irony is it that men ask for lady doctor when there’s need for her wife’s treatment and yet is against the women education. Current education minister of France (Najat Vallaud) birth in poor family toiled her way to such a prestigious position because state backs their underprivileged class in developed societies. Have our mothers sworn not to give births to such women? Why can’t our children especially women from slums not make to such levels in their life? Do we produce such miserable human material in our Pak Land? No! We produce the finest people in our societies who due to the recklessness of government ends up either earning a meager amount of few hundred dies while tolerating sexual harassment in offices or ends in compromising marriages wasting whole of their life in 2-4 bedroom apartment.

The state has a responsibility to look after the widow’s so that they don’t fall into wrong hands; unfortunately, government neglecting their duty has filled the Red light area of Lahore where flesh is sold for few hundreds which run households of women who have nobody to look after them. Saadat Hassan Manto denounced the society as “Hamara maashra aik aurat ko kotha chalane ki ijaazat to deta hai, par taanga nahien (Our Society allows women to run brothel houses but not carts)”

Civilizations cease to progress when their women are thwarted to accomplishments and men name all medals to their uniforms. Pakistan’s women population is around 48.76% who rather than representing Pakistan over international platform shoulder to shoulder with men ends up planning every month’s household expenses in the meager salary of her husband. Hopelessness is considered as transgression in Islam, let’s be hopeful to see a day in our lives, where parents would visit shrines to pray for birth of a baby girl and contemplate that for whole life what they believe to be a liability is actually the most precious asset of their life who they don’t need to sell in the service of men.

Autjor is a university student doing BBA and currently working as a Freelance writer.
Wants his writing to inspire and bring people back towards reading, in this modern time.

Why People Are Expecting Too Much From IK?

Flâneuse-ing at home against the pandemic!

Being a woman is not an easy job!