Smoking Kills, But So Does Denying the Right to Choose!

One of the top ranked universities of the country made an interesting announcement recently. Nothing to do with academics, research or achievement of any sort. It is in terms of its students’ health and welfare I believe, but whose health and whose welfare becomes surprisingly relative here!

A notification released by National University of Science and Technology (NUST) says that students are allowed to smoke only in designated areas. A detailed map has been provided for guidance; so far so good. However, further instructions are added which say that girls are not allowed in these smoking areas, meaning to say that female students of NUST are not allowed to smoke. If found guilty, not only they can be fined, a letter of intimation would also be sent to their parents!

Now I’m not an advocate of smoking nor do I engage in the habit. But what I do believe is that smoking can’t be sexist. What is a health concern for a male is also for a female. And what is immoral for a female should also be for a male. While the society may take time to switch attitudes, the process sure does take longer when institutions influencing thoughts and opinions continue to uphold patriarchal, discriminatory, sexist attitudes. It drew criticism even from the Minister for Human Rights, Shireen Mazari, who tweeted that “Good to discourage smoking but discriminatory approach towards girl students and gender-biased rules cannot be accepted”.

In an institution where students of all genders are welcomed to pursue higher studies, what room is left for such discriminatory attitudes? An act can be deemed unacceptable, but can it be segregated into male or female? If smoking is a criterion to define bad girls, how can this very unhealthy habit be acceptable for good boys? Do the lungs of males and females function differently? Is the cigarette smoke harmful only for the ‘weaker sex’?

This notification stems from the age old belief that bad girls smoke and good girls don’t. Around the same time when this belief originated, there was a similar rule applied on boys: It’s disrespectful to smoke in front of elders. So no matter how many drags the boys took privately or in similar company, the cigarettes were butted out if an elderly gentleman or lady were suspected to be around.

But with times changing, the latest is that fathers and sons sharing a smoke is part of growing up, rather part of a boy entering manhood. Sure cigarettes are harmful, but a drag once in a while together helps both open up and develop a closer bond.

For girls, however, times have not changed. The same image is invoked when one hears of a girl smoking: she hangs out in bad company, her character is questionable, she is too outspoken and speaks foul language, and she has no respect for elders. With due respect, how does the same cigarette manage to keep a male inhaler innocent, honourable and respectful?

Remember the fuss over Mahira Khan’s puff with Ranbir? Critics couldn’t decide what to criticise more: her daring dress or her sinful smoke. Luckily, she got supported by peers in her industry through social media campaigns so the puff issue was huffed. 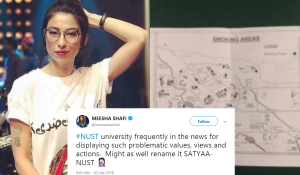 Smoking is a major health hazard, but when it is posed as selective criteria for judging morality of women, the act of smoking then becomes an act of defiance for these women to challenge the double standards of society.

In the West, smoking has had a close association with women’s liberation movement. During the 19th century, smoking among women was often attributed to sex workers or women who society considered ‘immoral’. However, in 1929, a major tobacco company organised a parade of women marching down New York City’s Fifth Avenue holding lit cigarettes that were coined ‘torches of freedom’. This location was remnant of the 1915 Suffrage Parade march where tens of thousands of women marched for the right to vote. The similarity drawn between these two marches posed smoking as ‘liberation’ and ‘emancipation’ for women.

In 1968, the cigarette brand Virginia Slims was marketed exclusively to women with the tag line ‘you’ve come a long way, baby’. Riding on the wave of feminism, these tobacco corporations shrewdly tapped a potential market for their product. For the targeted consumers – the women, it became a means of celebrating their liberation. Also over the years as traditional gender roles changed in the West, it became more socially acceptable for women there to smoke.

However, for women in countries where gender roles remain the same – where man is still traditionally the provider, the strong, the protector and woman is the weaker and the needy, their portrayals of good and bad also remain the same. A puff of smoke in public may seem a trivial issue here for men, but for women, it is an act which questions their social standing. It risks not only their own image of a polite, well trained, not questioning lady with a decent background, it puts her parents too in an awkward position where they have to face raised eyebrows, wagging tongues and pointing fingers of the society.

In the East, it is actually also a symbol of denying restrictive standards the society has for women and that of empowerment too, of the right to choose. “Whether it’s the closing scene in Alankrita Shrivastava’s Lipstick Under my Burkha or Lisa Haydon’s portrayal of a ‘free, liberated women’ in Queen, even Bollywood speaks of the emancipatory notion of the choice to smoke”.

In 2010 the Hamas-led Islamist government of Gaza imposed a ban on women smoking publicly the popular nargilas, a smoke pipe common in Arab culture. A spokesman for the Interior Ministry explained that “It is inappropriate for a woman to sit cross-legged and smoke in public. It harms the image of our people.” The ban was soon lifted and women returned to smoking in popular venues.

War Can Never Be a Solution