6th September-Always Remember Those 17 Days of the Pride

On September 6, 1965, Indian army crossed the international borders of Pakistan without a formal declaration of War. At 3:00 AM on September 6, 1965, without a formal declaration of war, Indians crossed the international border of West Pakistan and launched a three-pronged offensive against Lahore, Sialkot and Rajasthan. There was a fierce tank battle on the plains of Punjab. The domestic Indo-Pak conflict transformed into an international conflict and raised Super Power concerns. This action of India, which claims to be the largest democracy in the World, was in utter violation of International law, charter of the United Nations and norms of civilized behavior among states. India arrogantly swept aside her international commitments in her desire to subjugate the region. Indian’s attack against Lahore was held and beaten back with heavy losses to the attackers. The Pakistan Army units defending on the ground, supported by the Pakistan Air Force were able to blunt the Indian offensive and roll it back. 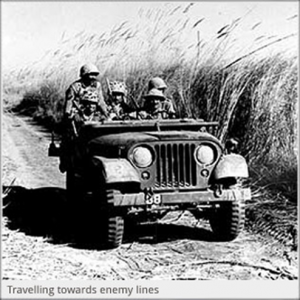 After Lahore attack, exact two days later on 8th September India launched its main attack against Sialkot using its armored division and other strike formations. The seventeen-day war witnessed the largest tank battles since World War II, causing thousands of casualties to both sides, but remained militarily inconclusive. Pakistan withstood the invasion of its territory by an enemy four times its size, and in doing so the whole nation stood up to the challenge with an iron resolve. The nation mobilized at every level, where every child, man or woman worked towards the war effort, be it to raise funds, train as civilian guards, or as nurses in hospitals. Madam Noor Jahan took to the airwaves to sing her inspirational war songs in praise of the defenders, and she became a symbol of the indomitable will of the nation.

Now the biggest question is that how this war came to an end? The U. S. suspended military supplies to both sides during the Indo-Pak War. Both the Soviet Union and the United States took a united stand to curtail the conflict within the boundaries of the Sub-continent from escalating into a global conflict. China threatened to intervene and offered military support to Pakistan. It was to keep China away from this conflict that both the Soviet Union and the United States pressured the U. N. to arrange for an immediate ceasefire.

The main diplomatic effort to stop the fighting was conducted under the auspices of the United Nations and a ceasefire came into effect on September 23, 1965.

The Soviet Union, which had remained neutral while India and Pakistan were at war, played broker at Tashkent afterwards. A Soviet Government communique formally announced on December 8 that the Indian Prime Minister Shastri and the Pakistani President Ayub Khan would meet at Tashkent on January 4, 1966.The main achievement of the Conference was to withdraw, no later than February 25, 1966, all armed personnel to the position held before August 5, 1964.

The war ended with the mediation effort of the USSR and a peace agreement was signed at Tashkent.

The 6thof September is a golden chapter in the history of Pakistan. This is the day when we pay tribute to the brave martyred soldiers who sacrificed their lives in defending their homeland from the enemy, especially to those 11 martyrs who distinguished themselves for their extraordinary heroism and were awarded the anticipated Nishan-e-Haider.

Pakistan Defence Day is the most surprising and noteworthy time ever. That day we remember all the surrender given by our nation in the security of our homeland. Defence day is referred to in Pakistan as a national day of the time upon the arrival of September 6 every year. This time, illuminates us individuals who got killed in the India-Pakistan war of 1965 and compelling assurance of Sialkot and Lahore and a few different parts of Pakistan.

On this pride day, special prayers would be offered after fajr in mosques for the progress and prosperity of the country. Fateha and Quran Khawani would also be held for the martyrs. Numerous functions would be held all across the country to mark the day. Main function of the day will be held at General Headquarters in Rawalpindi to pay tributes to martyrs.

Years later, once again, we are engaged in a war and our soldiers are sacrificing their lives to protect our homeland from terrorists. We are passing through challenging times. Any act of terrorism is accredited to Muslims. We must learn to stand confidently on our own feet.

Today our nation stands at the intersection of its destiny, facing numerous challenges to the security of the country. So, it is not army war only; it is national war that demands support of every citizen and politician. On this occasion, recalling the 1965 spirit of unity.

We should all reject our domestic variances and at least stand together on basic national concerns, for it is feared that the existing conflicts will have dreadful consequences if we permit them to remain. Let’s pledge to revitalize the essence of September 6, 1965 when the entire nation was one entity.

Especially 6th September is the day for all of us to remember for it marks the resilience and character shown by the brave sons of this land in the face of the naked aggression of the enemy on our eastern border. It is a day that reminds us of the countless sacrifices offered by Pakistanis from all sections of the society ever since the independence gained in 1947, in different walks of life.

6th September calls upon us to always remember those seventeen days of the pride of our nation and try our utmost to maintain our grace and dignity in the same way. May Allah help us in this essential task.

. We should all pray for the safety and solidarity of Pakistan and also that Allah gives us the strength, courage and determination, to protect and safeguard at all costs, the freedom and honour of our homeland.

Dr. Arif Alvi – President Should Be the Sole Man with Supreme Authority