In August Pakistan brings a lot of Green and White

Pakistan’s Independence Day, which is annually held on August 14, celebrates the country’s independence from the British rule on that date in 1947. This day is an occasion to promote patriotism and national unity.

Why we celebrate this day? On this day in 1947, Pakistan became the world’s first Islamic republic when it gained independence from British rule.

Subcontinent was remained British colony from 1847 to 1947; Muslims were the rulers before the British raj and suffered after the war of 1857 against British, many great leaders such as Sir Syed Ahmed Khan and Maulana Muhammad Ali Johar worked hard for the Muslim’s political advancement.

In 1885 All India National congress was founded, Major Muslim political leaders, including Muhammad Ali Jinnah, were members of the Indian National Congress and worked towards Hindu-Muslim unity and India’s independence, but soon they realized that the Hindus are never serious with Muslims; they never want to see the improvement of Muslims in any field of life.

In 1906 All India Muslim league was founded, there were growing demands from an independent state of Muslims in India. In 1930 the great Allama Iqbal (poet of the EAST) gave the idea of a separate Muslim state. Strong Hindu nationalism is the major cause of Two Nation Theory, an ideology that is attributed as being the basis for Pakistan’s creation. 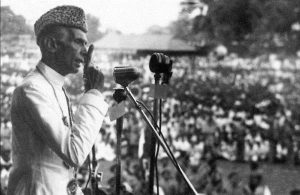 In 1940 the Pakistan Resolution was passed in Lahore demanding greater Muslim autonomy in British India. After World War II, it was expected that the British colonies would soon fragment. The Pakistan Movement which was headed by Muhammad Ali Jinnah resulted in creating a Muslim state. Pakistan gained independence from the British rule on 14 August 1947; it was a day when every single Muslim celebrated the feel of independence.

The word Pakistan is a conjunction of two words “Pak” meaning “Pure” and “Stan” meaning “Land”, a name coined by Choudhary Rahmat Ali.

Our identity in all over the world, our National flag was officially adopted on 11 August 1947, just three days before the country’s independence.

The Pakistani Flag was designed by Ameer-ud-din Khidwai. The national flag of Pakistan is dark green in colour with a white bar, a white crescent in the center and a five-pointed star. The significance of the colour and symbols used in the Pakistan Flag is as follows:

Now, some light on our very renowned “Pak Sarzamin” Qaumi Tarana. National Anthem of Pakistan was written by the Urdu poet Hafeez Jullundhri.

After National anthem, now move on to National language. Well, we all know that the national language in Pakistan is Urdu. It is Pakistan’s most widely used and understood language and serves as a bridge language, allowing people throughout Pakistan with different mother tongues to communicate when they come in contact. So while it may not be everyone’s first language, it is almost always people’s second language and it is the language most often taught in schools. While Urdu is the language most associated with Pakistan, a small percentage of Pakistanis (typically those particularly in tribal lands) do not speak or understand Urdu at all.

The Pakistani Rupee (Urdu: روپیہ‎, ISO code: PKR) is the official currency of Pakistan. The word rupiya is derived from the Sanskrit word rupya, which means “wrought silver, a coin of silver”. The Pakistani rupee was put into circulation in Pakistan after the dissolution of the British Raj in 1947. Initially, Pakistan used British Indian coins and notes simply over-stamped with “Pakistan”. New coins and banknotes were issued in 1948. The issuance of the currency is controlled by the State Bank of Pakistan, the central bank of the country. The most commonly used symbol for the rupee is Rs, used on receipts when purchasing goods and services.

Pakistani nation is very lively. Although Pakistanis face many of the social and economic problems typical of developing nations. Poverty, illiteracy (inability to read and write), unemployment, economic inflation, and a widening gap between rich and poor are only a few of the country’s ills. These problems have been intensified by wars with India, high spending on the military, and the continuing conflict in Kashmir. The frequency with which the Pakistani Army has overthrown democratically elected governments has added to political instability in the country. India and Pakistan both conducted nuclear tests in 1998, heightening political tension.

August in Pakistan brings a lot of green and white in the country as we get ready to celebrate our Independence Day. White and green balloons, Pakistani flags, badges, apparels matching the color of flag and other merchandise makes highly profitable rounds in market.

People all over Pakistan celebrate Independence Day with patriotic zest. Many people who attend the Independence Day parades dress up in green and white, which are the Pakistani flag’s colors. People visit national monuments and places of national significance to celebrate Independence Day. This is also a time to meet relatives, exchange gifts and visit recreational spots. Pakistan’s national flag is hoisted on public, private buildings, residences and monuments at dawn. Official buildings, including Parliament House, are decorated and colorfully lit. The prime minister and president address and congratulate the nation and talk about the day’s significance. Streets and houses are decorated with candles, oil lamps and pennants. Firework shows are put together on the eve of Independence Day. Pakistan’s Independence Day also pays homage to people who devoted their lives for Pakistan’s freedom movement and made sacrifices to attain Pakistan’s independence. A change of guard takes place at national monuments, including the mausoleums of Muhammad Iqbal, who was a poet, philosopher, and politician, and Muhammad Ali Jinnah, who is considered as Pakistan’s founder and Quaid-i-Azam (supreme leader). Events held during the day include special theatre shows, national song competitions, concerts, and Independence Day pageants. Radio and television stations broadcast national songs and specially prepared Independence Day programs.

All major public and private buildings, roads and avenues have been decorated with illuminations, national flags, posters, and banners for the Independence Day festivities. The day dawned with special prayers in mosques for the progress and prosperity of the country, followed by thirty-one gun salute in the federal and twenty-one gun salute at the provincial capitals. The main event of the day was the flag hoisting ceremony at the Convention Center in the federal capital Islamabad.

In the wind up note, I also want to talk about Pakistan Zindabad is a slogan used by Pakistanis as an expression of victory or patriotism, often used in political speeches. On 14 August, all over atmosphere full of energy and sounds with Zindabad Zindabad, Pakistan Zindabad.

Stereotype: A Menace to Society