I classify myself among those people who require more than a trifle incident to stimulate my hands to jot down my feelings. You can say that when something gets under my skin then it’s impossible to move on until I get my all frustration out on a paper. Anne Frank just has the best quotation for this situation “papers have more patience than humans”.

I jotted my story, my feelings or the source of my frustration to brief the blunder I made. To pin point my short comings but I couldn’t, I only dared to go to market alone. Perhaps my mistake was that I didn’t covered my head but I only had one question what gave men the right to encage my freedom unto the standards  they approve?

To get to the depth of my story we need to take a rollercoaster ride down the memory lane of my childhood. I’m the youngest among my siblings and having a brother just 2 years older is what hindered my growth as a normal girl. I enjoyed the same freedom as my elder brother. When I recall my childhood I have a striking reminisce of me and my brother running to different shops, even shirtless sometimes. Well I must add those were good old days. In 2010 we moved to a new society, the society was well developed, civilized, polished and refined.  But no one could judge how it was lunged with prudish people.

Imagine a 13 years old girl who spent most of her day running around the shops of the corner without any care of the world, being taught by society that you must dress up in a certain way to go to the shop. Perhaps if I would’ve been brought up that way then it would have been easier for me to mold myself into a puppet. But after I savored the perfect freedom for 13 years and everyone was now ready to encage me. Being a rebel from the time of my birth I stepped out in our new society with the clothes that pleased me. I will never get over the glares people pass me for what reason “for wearing jeans”. And I’m sorry to all those people because their glares and comments to shut me down were never enough.  Those gawks were only capable to hold me back for a small period of time, as that period passed I was ready to step out with glimmering eyes that were set out to reckon the eyes that demurred me.

Well just a year ago when I was 19 I met a new side of mine. I was never aware I could be encaged. Whatever happened I always made sure I break the chains that could hold me back, but like any other day that day of aghast dawned me. I don’t make trip to the shops across the corner late at night but I still remember it wasn’t late it was only 6:00pm. Like an alone wolf I entered the shop bought the usual snacks and was ready to go home. Unfortunately it wasn’t really my lucky day and when I was ready to pass the street dark green orbs of a cat cascaded their way from the front towards my muddy orbs. 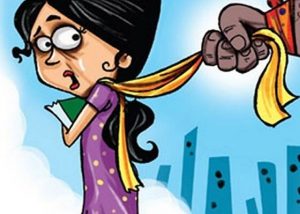 Being cat-phobic I had to alter my route and I made my way through the long track. Gratified with my little performance I was making my way towards home, pledged with delight I was oblivious of the fact that someone was following me. The significant snickers and whispers disclosed the presence of stalkers unto me. I assured myself that when I would turn around the corner they would leave me but the persistent group followed my footsteps. I wasn’t bothered much until they started objectifying my gait. Their outlandish comments made me enhance my pace for a second I was scared what they might be capable of doing. The rapid footsteps could be judged by anyone and I guess the fear they had induced in me pleased them. At the end I made it to home safe and sound but what got under my skin for weeks and weeks were the skills of those guys. My body was injected with a fear that was incognito but it metastasized rapidly. And before I could comprehend I was scared to go out alone. My trifling freedom was piercing the dignity of men I didn’t even know. I am not aware whether men do it on purpose or it’s just an act out of prudishness. I feel that the ascent of men towards horizon is hinged unto the suffocation a woman feels. I am oblivious how even my speck of a freedom can’t be endured by my opposite gender. I know what people might pin point here that if going alone is dangerous don’t go alone but guess what “the things became worse when I went out with my cousin”. A couple of guys in a car followed us around. I won’t be discussing the details here because I have a word limit and I need to get down to the real business.

Categorizing the women walking independently as “they are asking for it” is the inhuman invention in human history. We all are creatures of GOD, we all are equal. We must stop suppressing each other it won’t get us anywhere. Even if we don’t realize it we are insulting the creature of GOD by judging them and caging them. I believe we humans are capable of bringing a change.

My name is Anee Muskan. I'm a 20 years old striving writer. Author of a little short story book by the title
"BY THE MOORS".
An aim to soar high.