Astore (2600 m) is a sleepy town right in the center of trekking action between Diamer District (KKH), Skardu, Deosai, Nanga Parbat (8126 m) and Minimarg. The high altitude mountain passes that lead to these locations are wonders in themselves – and it all starts at Astore. Just because these treks are still quite intense, and the people’s movement is light, the breathtaking beauty along the way is preserved in its natural form. Hidden lakes, lush green valleys, clear water rivers and towering snow covered mountains make every trek a must-do thing.

Astore valley was also a major trading post for goods exchange from Srinagar to Central Asia and upwards North towards China. Astore was first under the control of a Persian mountaineer Ghazi mukhpoon who married into the existing ruling family and distributed the land between his four sons. After them the Dogra rulers of Kashmir took over the place to save their trade. British eventually annexed the place in the 19th century and let the Dogra run its affairs. Gilgit Scouts kicked out the Dogra and handed Astore to Pakistan in 1947-48. 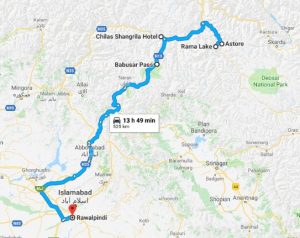 We set off from Rawalpindi on a 9 hours’ drive to Chilas town across Babusar Top on day 1. The purpose was to cover maximum ground on the first day so that we have some sun light left to explore Rama Lake when we reach there after 6 hours on day 2. Chilas-Astore is 4 hours and another 2hours to Rama meadows. Rama Lake is a further 2 hours of hike or one hour jeep ride. It would be better to stay the night at PTDC motel Rama Meadows. Nothing beats waking up early in a chilly morning and having hot tea in the center of lush green meadow with pine jungle and stream flowing through it.  The road after Astore town breaks up and ascend is a little too much for normal sedans. In any case, you can hire a local jeep for Rs 4000 for Rama.

You can get freshly cooked wild salmon from the local kiosk while dumb looking horses graze besides you.

Rama meadows are an ancient pine forest at the tail end of Rama Glacier that has receded right up to the foothills of Nanga Parbat (South side). I am guessing global warming and deforestation is to blame.

We started our hike to the Rama Lake, which is one of the several ponds left over from the receding glacier, that hasn’t drained yet. It was a moderate 2 hours hike with lovely views of landscape, mountains, streams, mini-glaciers and pools on the way. Rama lake was however breathtaking. You can see the reflection of Chongra and Nanga Parbat peaks on its surface. There is always moist cloud cover over the lake but when we got there it was hot. Kids were exhausted because we took a goat trail that got impossibly steep – so stick to the road. The actual Nanga Parbat Base camp is accessed through another town close to Astore, called Trishing. I slept for two hours after coming back from the hike right on the meadow’s grass carpet.

There was a time when there were musk deer, brown bears, and mountain cats in these lakes – not any more. The poor creatures have literally run for the hills from the crazies down below.

Off season is the best time for Rama Lake as the prices and hustle bustle is reasonable. July would be ideal month to visit, just before Eid Holidays. Deosai also opens up in end-June.

As soon as you leave KKH for Astore valley road, the climate becomes cooler, decibel level lowers, streams become louder and the villages become prettier. I even tried to ride one of the roped gondolas to cross Astore River, but chickened out when I saw the raging river below. Road up to Astore also breaks up a lot and a sedan would take some beating.

Don’t forget to get your supplies from Astore town as there is nothing farther ahead. Astore has many motels like the ‘4-seasons’. Do book before leaving, just in case.

These are the various vectors for mountain passes originating from Astore: 10 day trek to Mazino Pass (5400m) leads to Nanga Parbat Base camp then on to Buner across the KKH. 3 day trek Harpo Pass (3500m) leads to Skardu across glaciers. 5 day trek across Bubin Pass (4000m) to Skardu has meadows and mountains on its path. Trishing- Rupal sightseeing trek to see the Rupal-Nanga parbat peaks.

If Astore is the destination then join some trekking expedition to really enjoy nature.