POLLUTION ANOTHER FORM OF TERRORISM

The world’s population is undergoing extraordinary progression and, for various, living standards are amassing too. The burdens being retained on our environment are inexorable – augmented consumption of natural resources, amplified production, and spreading urbanization: consequence is more waste and pollution.

Contamination is the procedure of building water, air, land or supplementary shares of the environment hazardous or improper to use. This can be through the priming of a pollutant into a natural environment, but the pollutant doesn’t require to be physical. Things as unassuming as temperature, light and sound can cause pollution when acquaint unnaturally in an atmosphere. Lethal pollutants distress approximately two hundred million individuals globally. In some of the ecosphere’s exceedingly contaminated dwellings, infants innate with birth imperfections, life expectancy may be as low as 45 years for the reason that of tumors and supplementary syndromes and kids have lost 30 to 40 IQ points, and. The idea is to have clear knowledge of pollutants, pollution sources, techniques of managing pollution, pollution prevention strategies, managing and reducing waste acts and above all regulations and agreements implementations.

Land can grow into garbage as a result of domestic trash and through industrial pollutants. According to the Environmental Protection Agency (EPA), Americans generated nearly 250 million tons of waste in 2010, comprising of food scraps, appliances, and grass clippings, batteries, bottles, clothing, paint, newspapers furniture, and product packaging. That’s approximately 4.3 pounds of garbage per individual per day. Over 54 percent of this waste is dumped into landfills. American Society of Civil Engineers reported that almost thirty four percent waste is recycled, which is about twice the quantity recycled in 1980.

Considerable amount of it is categorized as non-hazardous.  Hazardous waste is any solid, sludge or liquid trash that comprehends capabilities that have potential of harming human or environment health. An apple a day might have kept the doctor away erstwhile to the development of pesticide, insecticide and weedicide industries.

If we will not manage this waste I fear we will be standing in the same line for our future generations as when I reached my teenage I was told that the future of the world was miserable , pollution detonation was unstoppable, global starvation was inescapable. I genuinely want the succeeding generation, my own children, to believe that despite of all the odds it’s imaginable that the future might be brighter than the past.

The air we breathe in has a very particular chemical configuration; 99 percent of it is composed of oxygen, nitrogen, water vapor and inert gases. When particles that aren’t usually part of air mix into it cause pollution. Releasing of particles into the air from burning fuels, smoking, burning of tires, and dangerous gases such as nitrogen oxides, carbon monoxide, sulfur dioxide and chemical vapors leads to declining the air quality standard and these can participate in additional chemical responses when they entre in air, causing smog and acid rains.

The effects of air pollution on human health can vary widely depending on the toxicity or severity of pollutant. An irritant (e.g. particulates less than 10 micrometers) may cause cardiovascular disease, increases in asthma and respiratory illnesses. The old, the very young and those with weak immune systems are most likely to suffer from the aftermaths of air pollution.  These pollutant may be radioactive (e.g. radon) or biologically active (e.g. some viruses), or carcinogenic (e.g. some volatile organic compounds). There’s so much pollution in the air now that if it weren’t for our lungs there’d be no place to put it all. So much of the habitat destruction and pollution is based on the simple principle that we somehow have been given free license over other species to degrade the planet.
Water pollution occurs when hazardous external elements or chemicals acquaint with water, containing sewage, chemicals, fertilizers and pesticides from agricultural runoff, or heavy metals like mercury or lead from industries or water diversions, channelization of streams and air deposition. Bacteria, mercury, phosphorus and nitrogenous contaminants dominate water streams. 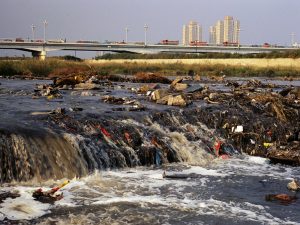 According to some researches 2.5 billion people do not have access to appropriate sanitation and around 783 million people lack facility of clean drinking water.  Around 80 percent of the marine pollution is sourced by agrochemical and other land pollutant runoffs which ultimately impose adverse effects on marine life. Dissolved oxygen is caused by the decomposition of organic materials, such as sewage introduced into the water. Low levels of dissolved oxygen in the water are also considered a pollutant.

Warming water is equally damaging. The artificial warming of water is called thermal pollution. It occurs when an industrial unit or power plant that is using water to cool its operations ends up discharging hot water into streams. This lowers the capacity of water to hold more oxygen this sudden change of temperature in the body of water can also kill fish.

Water pollution is sometimes referred as Eutrophication, or also termed as Nutrient pollution. This form of pollution occurs when nutrients, such as nitrogen, are added into water bodies. These nutrients makes algae grow at excessive rates by providing fertilizer source to algae which result in light blockage for other plants causing death of those plants and leading to their decomposition which decrease oxygen in the water. Low oxygen level in the water slays aquatic life.

Have you ever imagined living deprived of the current ease of electronic lights? Lights have transformed the approach of how dawn and darks work.  But still there are more or less penalties of light pollution as some birdies sing at irregular hours due to existence of non-natural light which can also affect their migration schedules, as they allow for longer feeding times and often head in the wrong direction. Plant’s blossoming and developing patterns can be completely interrupted by artificial light. Above all light pollution could also be making smog worse by destroying nitrate radicals that helps the dispersion of smog. Solution to it is switching on the lights essentially required.

Even though we can’t see or smell noise pollution, still it is distressing the environment. Sounds produced by vehicles, industry or other sources when stretches at destructive levels cause pollution. Noise and health are directly associated, including high blood pressure, stress-related illnesses, hearing loss and speech interference. It may also add to hundreds of thousands of deaths per year by amassing the rates of cardiac disease. Subsurface noise pollution caused by cruise has been demonstrated to trouble navigation systems of whales’ and resulting in deaths of other species that hinge on the natural subaquatic biosphere. Pollution in any form is a threat to us, our environment and above all our future generations.

No one is holy those who pollute: sin against nature kill the pollution before it kills you.

Co-author of this article is Asma Sabir. She is a doctorate student in School of Environmental Sciences, University guelp, Ontario Canada.

YOUNGEST PH.D OF PAKISTAN
Dr. Azhar Hussain is working as Assistant Professor in Department of Soil Science, University College of Agriculture and Environmental Sciences, The Islamia University of Bahawalpur-Pakistan.