Who was Burhan Muzaffar Wani?

I am Kashmiri and for me Burhan Muzaffar Wani is like what Nelson Mandela is for South Africans, Bhagat Singh for Indians and Quaid e Azam Muhammad Ali Jinnah for Pakistanis. He was martyred on 8th July 2016. Tomorrow marks his second martyrdom anniversary.

Commander Burhan Muzaffar Wani is the pride of Kashmir and the founder of new age resistance. He is a golden page on the history of the ongoing Kashmir freedom movement. He was an appealing young leader who gave a new direction to the Kashmir freedom movement. He became the icon for the Kashmiri youngsters around the globe and especially for the youth living under Indian occupation. He will always be remembered as all other persons who lived for a cause and laid down their lives for it.

As his father recalls,

“Nearly Indian Army has thrashed everybody here … In any case, everybody doesn’t turn into an activist or freedom fighter. It relies upon the amount one can take. Somebody’s ‘Ghairat‘ (self-respect) gets tested consistently, so he chooses to reply. Others choose to remain calm. My child couldn’t stand to see the abominations and the mortification, so he picked this path. Burhan’s fight is not only for himself but for the whole Kashmir and for the sufferings of people of Indian occupied Kashmir.” 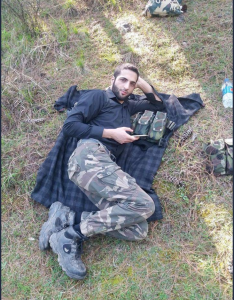 Burhan Wani was born in a well-educated family of occupied Kashmir. His father, Muzaffar Ahmed Wani, was a principal of a higher secondary school. His mother is a science graduate. Since his childhood, like every Kashmiri, he was against Indian military atrocities in occupied Kashmir.

He joined the Hizbul Mujahideen (A group of Freedom Fighters who fight against illegal occupation of India over Kashmir) in 2010 at the mere age of 15. According to some reports, once Burhan along with his elder brother Khalid was beaten up by Indian security forces on their way back home for no reason. This incident provoked him to stand against illegal Indian occupation on Kashmir. Soon after that incident, he joined the freedom fighters group. At the very young age of 21, he became the Commander of Hizbul Mujahideen.

Soon after joining Hizbul Mujahideen, Burhan Muzaffar Wani became an icon for youth. He got fame through social media. He was the first activist and freedom fighter from the Kashmir who decided to use social media for his cause. He used to interact with youth throughFacebook and YouTube. 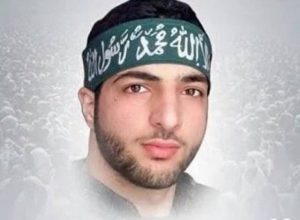 During June 2016 Hindu Yatra, he announced that his fight was not with common citizens of India but with Indian army – doing atrocities in Kashmir. He declared that the people coming to Kashmir for Hindu Yatra were his guest.

Once while addressing to the people of Kashmir, he said,

“Kashmir is ours and Kashmir belongs to Kashmiris while Indian forces are illegal foreign occupiers in Kashmir.”

He requested the youth to throw stones on Indian army whenever seen in living areas of Kashmir. Burhan Wani was rapidly becoming popular in the youth of occupied Kashmir because of his video messages. A number of young Kashmiri men motivated by his speeches joined Hizab ul Mujahideen freedom fighter group which appeared threatful to India and Indian armed forces which is why they martyred Burhan Wani on 8th July 2016.

I’ll never forget the day when Burhan Wani was martyred. It was, surely, one of the saddest days for Kashmiris. It’s been two years now and still, my eyes turn teary on his name.

After the news of his martyrdom broke, people of Indian occupied Kashmir poured out in the streets. People broke curfews and all barriers to reach his hometown to attend his funeral.  Whole Kashmir was echoing with the slogan “Ham Kia Chahtay…. Azadi” [What we want…  freedom]. Despite the huge deployment of Indian forces, hundreds of thousands of people attended Burhan’s funeral. Some reports suggest that his Namaz-e-Janaza was offered more than 40 times and the number of the attendees in each funeral prayer was above 7 lac approximately. 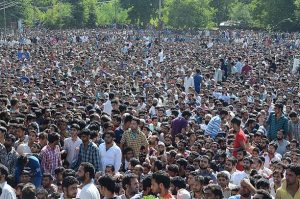 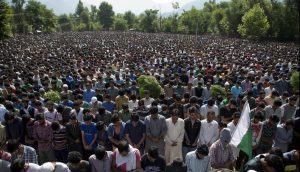 Other than this, his absentee funeral prayer was offered in all parts of occupied Kashmir and Azad Kashmir.

There was seen a momentum in freedom fights after his martyrdom. Since 8th July 2016, more than 1000 Kashmiris have been killed, pellets fired by Indian army injured more than 10 thousand people with the figures increasing every day. Every day streets of Indian occupied Kashmir echoes with slogs chanted by the orphan children, widow mothers, dumped bodies and mass graves – all calling for one word and one word only “Azadi”

Burhan Wani died for a cause. He died while protecting his people from brutal Indian forces and fighting against injustice and barbarism practiced by India and Indian forces in occupied Kashmir. He sacrificed his life for the freedom of Kashmir. Shaheed Burhan Wani, with his martyrdom, has given a new life to Kashmir freedom Movement. He will always be remembered as the king of Kashmir. We, the Kashmiris, will never let his cause die. We will keep fighting until we get freedom from India.

The author is a Human Rights Activist for Kashmir and software engineer associated with Dunya News Network. He tweets @AhsanNazirRaja

Helping loved ones with Borderline Personality Disorder in Pakistan