“The members of the Teefa in Trouble team did not strive to achieve individual fame, fortune, and glory with the film,” says Ali Zafar, the lead actor and executive producer of director Ahsan Rahim’s upcoming film. “They had the bigger goal of making a film that would secure glory for the Pakistani film industry and put our nation up on the map of international cinema. All of us have put our heart and soul into making Teefa in Trouble a film of international caliber and one that would be loved both at home and outside of Pakistan. I hope and pray that the film will make Pakistan proud.”

If its trailer is an index of the quality of Teefa in Trouble, then Ali’s hopes and prayers have been richly fulfilled. Energetic, slick and beautiful, the film’s trailer features excellent photography, great production design, deft editing, clever dialog, outstanding sound, and a capable cast of actors putting in brilliant performances. 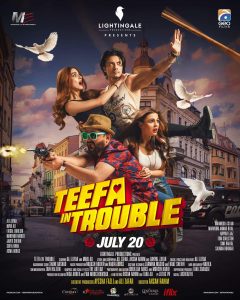 The film presents a simple, charming story. Teefa (Ali Zafar) is a local goon who makes a living by taking on criminal assignments on behalf of the rich and famous. The story is set in motion when Billu Butt (Ahmad Bilal) takes a fancy to Anya (Maya Ali), a beautiful girl who is completely out of his league. Determined to make their spoilt son happy, parents Khalida (Asma Abbas) and Butt (Mehmood Aslam) enlist the services of Teefa to abduct Anya. An elaborate plot, which involves principal characters traveling all over Pakistan and Poland, is prepared for the kidnapping but things do not go as planned when Anya’s parents, Bonzo (Javed Sheikh) and Sophie (Sofia Khan), get involved and Teefa and Anya find themselves falling for each other. 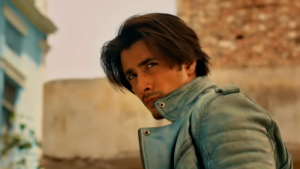 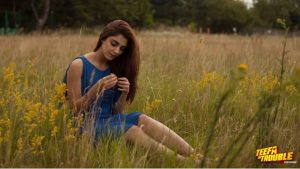 “Making a trailer is not easy,” confesses debutant director Ahsan Rahim. “One cannot give too much of the plot away because doing so takes some of the mystique of the movie and damages the viewers’ enjoyment of watching it. At the same time, one cannot be too cryptic in a film trailer. Not giving enough away in the trailer can lead to false expectations and lead to debate and reviews that hurt the film. It is important to find the right balance.”

An experienced advertisement director and film editor, Ahsan seems to have found it in the trailer which runs a breezy, spirited one hundred and ninety-three seconds. “It took me a full twelve days to come up with the right structure for the trailer,” says Ahsan. “My childhood friend, the very talented film director, and writer Syed Riaz Hassan, helped me assemble and put together the trailer. Aravind Vijayakumar’s sound engineering, Kashif Ejaz’s foley work and Shani Arshad’s score helped give the trailer the energy and verve I wanted. I am very pleased with the results and grateful for the praise that has been lavished on the trailer.” 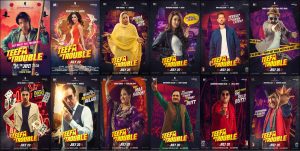 The opening shot of the trailer – a breathtaking aerial shot of Lahore – sets the mood for a trailer of both artistic and technical merit. The kinetic, unconventional score gives it panache and style and the swift, almost epileptic cutting, adds oomph and vigor, making watching the trailer a heady but veritable pleasure. And, although the trailer has many areas of strength, the one that makes it truly outstanding is the chemistry that lead players Ali Zafar and Maya Ali – seen together, very briefly, in the trailer – have with each other. 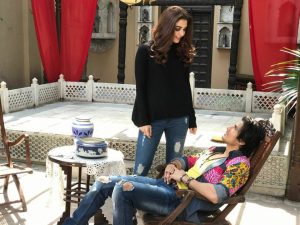 Maya, a big star of television, makes her cinematic debut in Teefa in Trouble after six very successful years in show business. Ali, one of Pakistan’s most enduring stars, makes his first appearance in a Pakistani film after twenty productive years in the industry. Judging by the trailer, the two actors waited for the right film to make an entry in Pakistani cinema. The two look great, act well, and embody immense charisma in Teefa in Trouble. More importantly, they make a wonderful screen couple and look good together. The star duo – reminiscent of yesteryear couples Shabnam-Nadeem, Zeba-Muhammad Ali, Hema Malini-Dharmendra, and Sharmila Tagore-Rajesh Khanna – brings an old-world charm and romanticism to a decidedly modern film and may actually help restore the glamor, Stardust, and allure that has been missing in Pakistani films since the nineteen seventies.

Watch the trailer of the movie below.

Ally Adnan lives in Dallas and writes about culture, history and the arts. He tweets @allyadnan and can be reached at allyadnan@outlook.com