I did my second trip to China in May 2018. It was a long travel from Karachi to Beijing and then to Wuhan which is a less international but beautiful city. China itself is a huge and varied nation and traveling through China provides social, economic and cultural diversity.

China and its people cannot be summarized as being just one thing or behaving in one way. I believe that travel is the ultimate learning experience and when you are out of your comfort zone, this is when you learn the most. The whole point of travel, for me anyway, is to expand horizons.

I met some Pakistani students during this journey. One of those students, Sana was studying Genetics in a province of central China. Sana departed me in Beijing at PEK international airport. Sana was acquainted and knew how to catch a train from Terminal 3 of the airport for the next connecting flight. Terminal 3 of this airport is the second biggest terminal in the world after Dubois T3,

In China, catching an international connecting flight is comparatively easier than domestic connections and especially when you have a short time of one hour for transfer.  I would say that at least 3 hours are required for the transfer. At a massive terminal, after passing long immigration line, catching a train without any proper guideline in such a short time is really very tricky.

In the domestic flight for Wuhan, there was no foreigner, all passengers other than me were Chinese.  In Wuhan, I met some Pakistani students from Gilgit and Baltistan. Many of them were studying at Wuhan University. There are almost 22,000 Pakistani students studying in China. Many students from Pakistan have arrived in China for a two-year Chinese learning program on fully funded scholarships.

It is hard to believe that how this gigantic, well-connected market is hard to communicate with, how come English isn’t the lingua franca there? In fact, Chinese are not in need to learn any other language. The foreign students who come to study here have to learn the Chinese language first. Chinese are struggling to make them independent in every field.

China is a market in itself where English is not necessary to learn; where Google and other Western internet services have been blocked. Last year in May 2017, certain apps were functional in Beijing but they have been superseded by their own Chinese apps. This indicates that China wants its domination and control over every sort of communication thus making her independent in every sphere.

In Wuhan, people were welcoming more than Beijing and in my case attention was nearly always positive and stemming from natural curiosity about me. A large part of interest comes from people desiring to learn more about your home nation. People are naturally curious and they want to know everything about you, where you come from and how your life is different from theirs.

People from rural areas and less international cities get to see fewer foreigners than those who live in the big cities. We were quite lonely in Wuhan as foreigners. With language barriers and limited English language internet resources, travel itinerary for Wuhan, the capital city of China‘s Hubei Province, can prove a little tricky.

Wuhan has a number of incredible places full of nature and quietness. The East Lake is the biggest scenery tourist attraction here and also the largest lake within a city in China. The East Lake possesses rich botanical resources with a large stretch of forest. Two of the most famous is the Cherry Blossom Garden, said to be one of the world’s three cherry blossom capitals along with Hirosaki in Japan and Washington in America, and the Plum Blossom Garden, which is listed as the top plum garden.

Amazing view! Feels like you’re on the top of the world.

I really didn’t want to come down from there.

The Tingtao scenic area is in the northwest of the East Lake, there’s a nice view to the other side of the lake, many tracks, pavilions, sculptures, gardens, flowers, bridges and much more! We walked there for few hours.

A Pleasant View of Tingtao Lake

The Yellow Crane Tower offers visitors an abundance of things to see. It is the city’s most revered landmark. As a source of pride among locals, it’s a universally accepted truth that no trip to Wuhan is complete without climbing to its fifth floor and checking out the bird’s-eye view of the whole city. As for Lahore’s locals,  jis nay Lahore nhi daikha, us nay kuch nhi daikha. 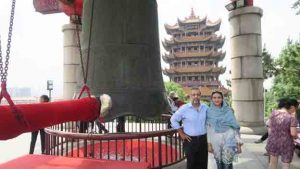 Packed full of boutique stores and galleries, an afternoon quickly goes by roaming in and out of shops and calculating prices of things by multiplying with the current rate of Chinese yuan but make sure to leave enough time for a hot cup of coffee or tea in the beautiful weather.

Statue of Yue Fei at Yellow Crane Tower in Wuhan

Tourists flock from far-flung areas to Wuhan University campus to catch a glimpse of some of China’s most enviable blossom gardens. Wuhan Museum was very inspirational with a gallery of art and history.  The natural calamity of 2008 earthquake and its devastating effects were captured in photos which were heart touching and emotional.

A view from Wuhan Museum

In our hotel’s lobby, we met a British tour operator who looked very happy to see Pakistanis whom he could have talked English fluently. He had visited Pakistan in 80’s and 90’s. He recalled that time especially his lovely experiences in Clifton Karachi and Peshawar. The main focus of his memories was the friendly behavior of Pakistanis and their hospitality.

“Pakistan is one of the most welcoming and beautiful countries I’ve ever visited and Pakistan is not what BBC represents,” he said.

‘Not only BBC but all media. We are peaceful people and us long to welcome foreigners from all over the world to our country.’ I added.

Chinese are polite and soft people especially in shops and restaurants where they make money but the average Chinese person you meet on the road, and taxi drivers can seem cold and unfriendly. Bad attitudes at the airport, flight attendants being rude, gate agents having unpleasant faces, ticket agents who won’t even move a finger for you, all are enough to shake one’s confidence in a new country.

With the rise in the business sector and friendly agreements, visas for China are becoming increasingly difficult to get. For the last two-years, the Chinese government has been asking for a police character certificate from the first-time visa applicants as well as those who have not visited China for the last two years.

Moreover, the demand for an invitation letter from China is making the visa process more complex. The general impression among Pakistanis is that visiting China is getting complicated. China should at least relax its visa policy for frequent travelers and businessmen of its neighboring friend country. Instead of getting friendlier, the rules for Pakistan are becoming more painful than other counties. Visa regimen should have reciprocal processes among friends. Otherwise, it would be difficult to differentiate between friends and foes.