Domel, Minimarg A Piece Of Heaven In Pakistan

Minimarg valley (2845m) was on the ancient trade route between Srinagar and Gilgit till 1948, when it became a hotly contested area between India and Pakistan. All cross-LOC movement stopped after that.

Our Gilgit-Baltistan Scouts handed over this territory to Pakistan, on a plate, after 1947. India tried to annex it again in 1971 but retreated.

Such is the strategic importance of this valley that on one hand, it leads into Kargil— the chock point between Srinagar and Leh — and on the other, it is a shortcut to Bandipora valley in Kashmir. We can cross over to Neelum valley from here as well.

As Burzil Pass (4100m) to Minimarg is only open from June-September, the Maharaja of Kashmir used Kamri Das Pass (which is close by) to reach his subjects in Gilgit.

We decided to go to Domel, which is a few hours from Minimarg because it was reachable with a 4×4 and we were too lame to hike to the place.

About 540kms (17 hrs.) from Islamabad, Minimarg is the ultimate cabin-in-the-woods destination in summers, when temperatures down below are 40 0 C. Even in summers Minimarg is a cool 10 0 C. 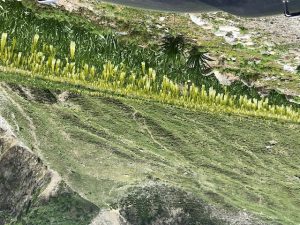 If it weren’t for non-existent roads, it makes better sense to reach Minimarg from Neelum Valley.

While going to Minimarg, the moment we crossed Burzil Top Pass at 4100 m, a lush green valley opened up before us, with a stream flowing across its length. Tall mountains, with snow still on top, lined the road on both sides. The prairies, yaks grazing and log cabins of locals looked mesmerizing. 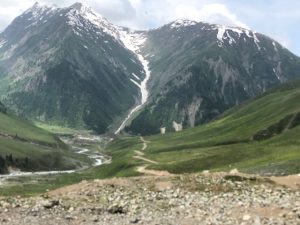 The flora is unique to this place. Flowers are brightly colored and contrast with the green fields all around.

It was still snowing on Burzil Top in the middle of June.

After a nights rest at Minimarg, we left for Domel, on the way were actual pine forests so dense, the light wouldn’t pass through. The mountains were covered in dense vegetation and trees— mostly because they had Indian troops lurking in the valleys— that discouraged illegal felling.

Domel had a natural lake called the ‘crystal lake’ which fed into a man-made one, the ‘rainbow lake’. Rainbow Lake was supposed to be a wild trout spawning pool, but we ate the breeders too. 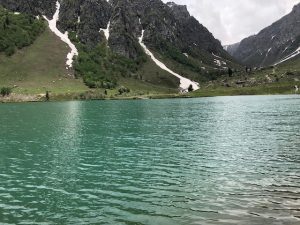 The water to these lakes came from winter ice that was still intact on the slopes of the mountains.

The rumor was that the area is still mined as Indian troops are too close for comfort. I wouldn’t let that deter me from exploring deeper.

I was told there is another lake, ‘aansoo’ a few kilometers hike from Domel but smack in the middle of the kill zone. So, naturally, I didn’t go there.

This picturesque route, which is more like a dirt track, also leads to Chota Deosai, which I am told is even prettier. 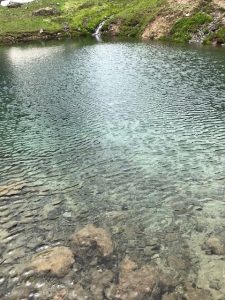 If you pay the local Willis jeep drivers enough money, they can take you right up to the Line of Control.

We took hired a local jeep for Rs 15000 from Astore for a two-day visit to Domel and Minimarg because I wasn’t sure of the descent from Burzil. It was a good decision, some turns are tight and decline is quite steep. These can only be engaged with 4×4 (4L gear).

The real beauty of GB-Azad Kashmir presents its self after Astore — where the population becomes scarce.

The road from Astore to Minimarg is lovely. The air is clean and scented. The trees have not been chopped yet and the water is clear blue.

I don’t think it is a good idea to take a sedan to Burzil, because there are a few stony stream beds on the way that would kill a luxury car’s suspension. Not to mention the sleet and slippery mud on the road.

There is no vehicle repair after Astore or any market for edibles. 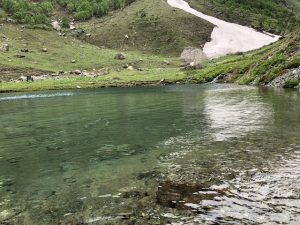 The road towards Burzil from Astore is perfect for camping and fishing because of the natural terraces and streams along the road. There is a less military presence here, which helps you relax.

I couldn’t spot any wildlife except the golden Marmot but I am told Markhor, ibex, snow leopards, brown bear are present in the ravines.

Across the line of control, the mountains are heavily forested. I wish someone would STOP CUTTING OUR TREES!

To get to Domel requires permission from the army brigade. For that, you have to know someone still serving in the military. All this effort, I assure you, will be worth it.

The Deeply Rooted Misogyny In Our Society