GaoKao: The Chinese Exam That Decides the Fate of Millions Every Year

It is a nine hours exam which is conducted over a period of two days. The high school students in final year rush to the examination centers to take this exam while their parents wait for them outside the center. The universities host this exam while it is an off day for the already enrolled students.

The announcement of holidays was not the only reason I noticed this event. On the test dates most of Beijing went into effective lockdown during the test time, with factories and building sites closed down, drivers banned from honking their horns, and police on patrol to ensure students aren’t disturbed. After seeing this exam, of which I had no idea, I did some digging and asked my Chinese friends and teachers to know more about it. So, here are some details which could be informative for the Pakistani education authorities as well as the students. 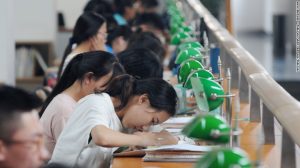 Gaokao is a Chinese language word which literally means “high test” is an abbreviation of the much longer official name, the National Higher Education Entrance Examination, the academic qualification test for almost all high school graduates to get admission in a university.

Origin of Gaokao could be found in the ‘keju’, another Chinese language word which means Imperial Exam or Civil Exam. Keju was introduced in the Han dynasty. That time, the central government tested applicants for the government office through a competitive examination and this is how talented individuals were selected from among the general public. So, this is generally considered that Gaokao is a continuation of the ‘keju’ model. 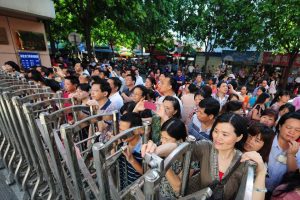 This exam was introduced in 1952 under the communist government but was suspended during the Cultural Revolution (1966-1976). Later, in 1977 it was resumed by Deng Xiaoping who is the architect of Chinese reforms. The credit goes to him for providing a solely equal opportunity to the whole youth of the country.

The students with 12 years of study are eligible to take this test. The format of this exam is 3+X, where 3 is the three national compulsory subjects; Chinese, mathematics and a foreign language (mostly English, French, Russian or Japanese) and X refers either to humanities subjects which includes history, geography, and political education or science subjects which include physics, chemistry, and biology, depending on student’s choice.

Gaokao examination is of significant importance for the students as it directly determines which university they will go. To some extent, it determines whether they will become blue-collar or white-collar workers later in their lives.

The age restriction on gaokao was scrapped in 2001. Now anyone with a high school diploma can take the exam. This test is considered vital for one’s future development. Many who fail in it spend another year in the school to prepare again for this test. Such people are called ‘fudu’ a Chinese language word which literally means ‘repeating the study’ students.

The results from this exam are the sole criteria that all universities consider at the time of admission in their undergraduate programs. This test is said to be making or breaking of one’s future, but it is also intended to help level the playing field between the country rich and poor. 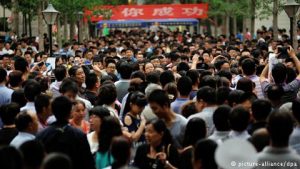 In Chinese society, it is as an important step towards attending a prestigious university and landing a high paying job afterward. In some cases, it can even be a stepping stone to elevating one’s social status. This exam serves as the final “checking door” for the participants 12 years’ efforts and dedications.

A friend of mine said a Chinese saying “score decides everything”. Now I understand the depth of this saying as Gaokao is believed to be the life’s most important test. It is extremely important for the students to be well prepared for this exam because the competition is way high, the number of students attempting the exam is huge but the seats are limited. 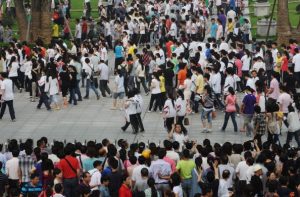 According to statistics, in the first year, after resuming the test in 1977, only 230,000 students out of 5.7 million passed this test. In 2010, 9.5 million students took the exam, about half of them passed it which is a shocking result but this exam ensures the pure merit for the undergraduate entrance, providing the chance to everybody to get admission in the undergraduate program of their choice; the rest is on their performance.

In addition, I saw news reports showing the strict examination centers which were tightly policed. The authorities installed a closed-circuit television in examination halls and metal detectors at school entrances to ensure students do not sneak in smartphones. 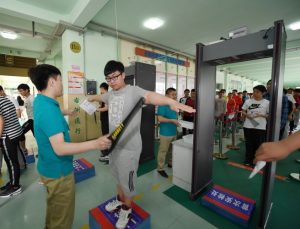 The students are banned from bringing “computerized watches” in the examination hall. The delivery of examination scripts to schools is monitored and tracked by GPS to ensure that the paper was not leaked beforehand, reported by Sina News.

While in some places the officials went as far as deploying drone carrying a radio scanner to catch cheats. This much of restriction had been put on the students to get the most talented out of them. Cheating is unaccepted in this exam. The guilty students are disqualified right away.

In my view, China’s Gaokao system cultivates a lot of talent to fulfill the needs of society, as well as it provides the opportunity to the deserving students who can get the advantage of it by showing the best that they can. However, I would suggest the education sector to do an in-depth analysis of this examination, even the whole education system of China, which could be used and adapted for the betterment of our own society and could be a step forward to development in the education sector. To conclude this isn’t the only exam Chinese student face in their education career, there are a variety of exams, which are compulsory for all the students to head for further studies.

Drug Abuse Is Out of Control at Pakistani Schools and Universities