Disciplined and Inclined to ‘The Kill’

If you traverse the world, looking for a Test loving hamlet, there is no better place in the world than Lords-The Home of Cricket. Houseful with 30,000 spectators, each an analyst in his own, dressed up formally, chanting on each brilliance from both sides, saw a great cricketing contest for three days of the match before ending rather blandly on the 4th day. Not only in Pakistan but Cricket loving peeps all around the world could not refrain themselves from entailing into the competition. Few of them expressed themselves on twitter as well.

To watch Test cricket happening in England is #EngvsPak

With four uncapped lads in the tour squad and an inexperienced pace battery having played less than half matches of what only James Anderson have played, they were never rated to give even a tough competition in ever troubling English conditions. But what did the world see was fabulous and majestic from the green boys in white. It stunned even the legends of cricket.

Congrats to Pakistan on there thrashing of England at Lords !Pakistan were terrific in all departments. What should England do followers as they’ve been ordinary for a while now ? Are drastic changes needed ? I would open with Buttler for starters @WardyShorts @MichaelVaughan

Abbas,Amir & Hasan Ali bowling this week is as good as we have seen in the UK for a long long time …. Outstanding … #EngvPak

Pakistan it is … what a Cracker Jack performance.. not seen a Pakistan side play so convincingly against England in many a years! Nailed it!!

What an awesome start to the season.Pak team have played exceptional cricket consistently in every form. Who knows what will happen tomorrow & that’s the beauty of test cricket but I do know that everyone will be glued to the game tomorrow watching to see what happens #PAKvENG

We have found another Asif in Abbas who knows his lengths and angles perfectly. Amir has regained his lost fabulous form; Hassan has delivered the much-needed energy while Fahim and Shadab have provided the utter balance. All this stuff is partially correct but whenever I dissect each and every situation both the teams faced in the game, I find very simple deciding factor before me. ‘They’ were disciplined, inclined to glory, within limits and professionally focused. 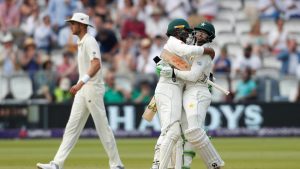 Each and every fellow knew his role and delivered accordingly. The biggest service Micky Arthur has provided to Pakistani cricket is the ‘team culture, incorporated by him in the DNA of young lads. They are embodying New Zealand in professionalism and attitude to fight.

They are never ready to slip things off their hands once grabbed. They never wait for the things to happen but consistently tend to make things happen. Post-tea session of the day one is the best depicted. After having bowled with pacers for two long sessions, Sarfraz could have gone with Shadab and Fahim to wait for the second new ball before bringing back his key fast bowlers but he went the other way. He decided not to let England batsmen settle for another hour and his pacers responded magnificently. England collapsed from 155/5 to 184 all out. The way to victory was paved for rest of the days to follow.

Shahid Khan Baloch is a digital media journalist and a Ph.D scholar of Management Sciences in The Superior College, Lahore (Pakistan). Core areas of interest include Politics and Cricket.You may contact him here.

Water Shortage In Pakistan: What Should Be Done?

Modern Muslims and Doctrine of Non-Violence

Look at the Bright Side!

Why is history important?