After a 5 year hiatus, things are finally getting saucy in the world of politics again. Public meltdowns, unwanted confessions, vague threats and even televised violence are all ramping up as election season nears. For Pakistanis at home, these happenings create a source of unintended humor and help lighten the mood.

This time it’s the omnipotent Chief Minister Punjab, Shahbaz Sharif, who was seen sitting alone on a stage meant for several of his party’s elected representatives in Chiniot, Punjab. As the new president of the governing Pakistan Muslim League (N), you would think CM Punjab would have had some company since his party swept the district in both Provincial and National elections in 2013, but apparently not: 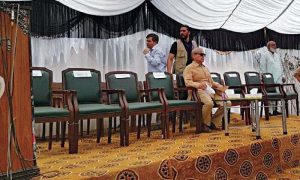 The reactions to the above range from the weirdly sarcastic:

Then there were those who loved the “one man army”:

The must-have self depreciating Pakistani:

To the highlight of the day:

So, What Happened?
As it turns out, members of the Provincial and National assembly from Chiniot wanted to make a statement, and boy did they get their ducks in a row! According to reports, the representatives from Chiniot were annoyed over being denied their “share” of development funds for large scale projects – such as roads, for one. While it may all be humor and fun and games for the casual observer at home, this incident has caused a stir in political circles.

But wait, there’s more! While a few members of the Provincial assembly did join Khadim-e-Ala on stage, all but one managed to disappear from the Chief Minister’s inspection visit to the district hospital. To his credit, the Chief Minister Punjab kept a straight face and not only stuck to his planned routine, he also carried out field visits and made sure that his trip was well worth the time.

What do you think of Shahbaz Sharif’s lone appearance? Don’t forget to leave a comment!

Disclaimer: The thoughts and comments shared above remain solely the views of those that expressed them. This article is meant as a humor piece, and is not intended to harm any person or organization.

Ahmad Ahsan is a development sector professional with nearly a decade of experience in communications, monitoring, evaluation, and reporting. He expresses his personal opinions on social, developmental, and technological issues impacting people in Pakistan and around the world.

#ZayaNaKaro: At Least We Are Realizing

Fasting apart from fulfilment of a religious obligation is also a great tonic for human health!