Talha Nadeem Proves That Following Your Passion Is All That Matters

The Pakistani music industry despite making some progress with popular applications like Patari, Taazi and BestSongs.Pk and with shows like Coke Studio, Pepsi Battle of the Bands, Cornetto Pop Rock etc that are backed by corporate sponsors, it still has a long way to go.

While many mainstream musicians are able to survive in this fragile industry that is riddled with corruption, piracy and many other negative factors that don’t let it achieve its full potential, the underground and new artists are the ones that become the target in this entire horrific circus.

However, if there is one thing that Pakistani musicians have which can’t be taken away by anything even by those who don’t want this industry to progress, it is the passion they have for their music and that passion is represented through the amount of effort they put into it.

One such passion comes from the city of lights and that is a business student from Iqra University Karachi named Talha Nadeem. He has not only become an inspiration to many young people who want to pursue a career in music but to many people who are on the quest to achieve their dreams. 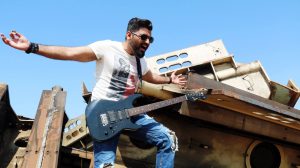 ‘Kabhi’ is the recently released song from the young artist and it is a song that people will remember for a long time. The song shows how innovative and creative the young minds of our industry are and despite of all the struggles. Kabhi being the end result is completely worth all the hard work that has been put in the song. The track has a certain 80s-90s western rock love ballad feel to it as well.

Kabhi Kabhi is the ninth original track from the artist which reflects how matured the young artist has become in his musical career. We cannot wait for what Talha Nadeem has in store for us next; another new song or an album perhaps? This will be revealed when the time comes and hopefully, that time is not far away.

Silhouetted Dreams: An Existential Narrative of a Postmodern Man

Consequences of Energy Crises in Pakistan

Instaggression: How social media is affecting our lives