Here Is Why Women Keep Silence On Sexual Harassment For Long

Yesterday, Meesha Shafi, in one of her tweets, accused famous singer and actor Ali Zafar of sexual harassment of physical nature.

It was no doubt a bold move by Meesha Shafi, as an established singer, to come on social media and speak up and that too against Ali Zafar. We must appreciate her for showing the courage. More power to you Meesha.

Sharing this because I believe that by speaking out about my own experience of sexual harassment, I will break the culture of silence that permeates through our society. It is not easy to speak out.. but it is harder to stay silent. My conscience will not allow it anymore #MeToo pic.twitter.com/iwex7e1NLZ

At first, Ali Zafar refused to comment but later on, he released a statement on his Twitter and Facebook page denying all the accusations and affirmed to take the matter to the court.

And from there began the character assassination of Meesha Shafi on the social media.

Why did you stay silent for long?

What made you to not talk about it at the moment he harassed you?

They did not stop there, they continued and targeted her clothes, lifestyle, and personality as a whole. For some, it was a publicity stunt. For others, it was a move to get few more followers on her Twitter account. Here, i am not talking about the men only, many women were also shaming her for breaking her silence. 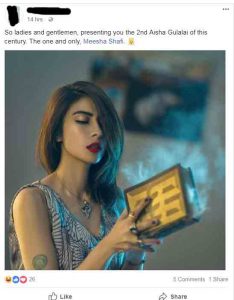 Some showed their concerns over the ‘taste’ Ali Zafar had in women. They found Meesha ‘, not-enough-pretty’ to be harassed.

Ok… so it should be an honor for a girl to get harassed by the men as it is a certificate of being pretty. Got it.

Some posted pictures of Meesha in an ‘inappropriate dress’ according to them raising a point that she must have called for the harassment. 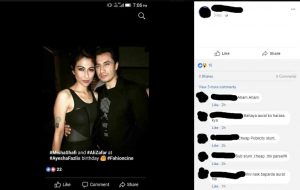 These are all those typical comments we hear after each case of sexual harassment take over the internet or the mainstream media. These comments are the reason the sexual harassment victims keep silence for long about the trauma and the pain they went through. They speak about it when they find support in their surroundings. They become vocal when they realize that they are not alone and it was not their fault.

Thanks to the #MeToo campaign which gave voice to the women all around the globe and they broke the silence they had been keeping for decades. But men did not like it and that is very obvious. Why men will like the situation where they are being exposed. (here, i am talking about the men who harass women in any way).

“Most men don’t understand how consent works until a gay man tries to touching him without his consent.

Then you will see him huffing and puffing like overfed rams! But minutes ago, you were groping a woman that did not ask you to touch her body.” 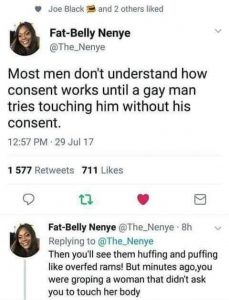 I guess all the men, shaming Meesha and other sexual harassment victims, can relate to it.

In our desi society, men consider it their right to be cheesy and flirty with the women; to stare those – they find attractive;  to groop the one they can get access to, and even tomasturbate in the public and that too in front of  the young college girls.

The other typical reasons are:

Just look at her dress and the make up she is wearing. It is a clear ‘yes’.

We don’t tease women. They ask for it.

If they are that pious, why don’t they stay at home?

If they decide to come out of their house then they should be ready for such situations and not complaint.

You can find many men saying same about Meesha on the internet.

To all these men, I always ask the same question. Why Hazrat Yusuf RA tried to run from the scene when that woman, herself, called him for the sin? He could have given the same reason, these all men give today, but he ran to be on the right path.

Have you ever thought why has Allah put that instance in the Quran? Think about it for a moment and you will realize that it was put there for you. Yes, that was put for you. That is there to understand that men CANNOT give any excuse in any such situation. Yes, you cannot.

Yes, I agree that its Not-All-Man but almost all women face sexual harassment of different nature in their daily life.

Then there are women who blame their fellow women for inviting men to harass them. They keep on doing this until they experience it themselves.

Stop being mean to your fellow women. You all know the hardships and pains of living as a woman in our society, you should not stop your fellows from raising voice for their selves.

Sexual harassment is a serious issue and needs to be addressed with the complete care. We will never be able to solve our problems until we start to identify those.

Sexual harassment is a reality and it can happen to anyone by anyone anywhere. If it has never happened to you it does not mean that it does not happen at all. If you cannot support the victim, please don’t shame her as well. Keep your mouth shut and your fingers away from your keyboard. It’s not your fight, so do not jump into it.