With over two decades in the cricket field, Shahid Afridi is still a person towards whom people pour their love, right from day one. With his massive fan following along the globe and charisma on and off the field, very few related to this game has got that sort of stardom. Whether bat or ball in his hands, he is somebody who has mastered the art to engage his audience no matter what the situation is.

Since PSL is in full swing and cricket fanatics are enjoying every bit of this competition. Here too Afridi just stole the limelight in the opening game for his new side Karachi Kings where he took a blinder of a catch to dismiss Umar Amin at long-on position – a position where he never used to field – which has already been unofficially tagged as ‘catch of the tournament’. Such is a power of this man, to not only dismantle the strategy of the opposition, but more often than not surprise his own team as well, and that particular grab perfectly summarized his career. 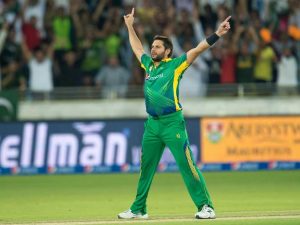 This was not the first time where he showed his glimpse of extraordinary fielding. In 2001 at Lords where he collided with his now veteran mate Shoaib Malik in successful attempt to take the catch of dangerous looking Marcus Trescothick, which proved to be match winning effort for Pakistan to reach in the final of triangular series. Then the famous backward running catch (he covered almost 30 metres to take that chance) in T20 World Cup in 2009 at The Oval against New Zealand that will always remain afresh for Pakistani fans. These sorts of catches are always tough, but he made that look ridiculously easy. 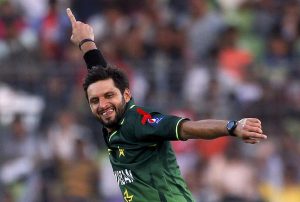 Talking about his presence in the field; he, for a considerable period of time, remained in the top three highest wicket-takers in the T20Is and was adjudicated ‘man of the tournament’ in the inaugural World T20 in 2007 because of his superb display with the ball. That was the time where he shaped himself towards being a bowling all-rounder and won several matches with his bowling performances. He ended his career with 395 wickets in ODIs and 97 scalps in T20 internationals. He is among handful all-rounders in the world who simultaneously took a 5 wicket-haul and made 50 plus runs with the bat in ODIs. His best bowling figures of 7 for 12 is among the above revealed record.

The main reason for his huge fan base is his batting for which he has been crowned as “Boom Boom”. There is the then record of fastest century in ODIs, 2014 Asia Cup where he singlehandedly won the game against Bangladesh and those two back to back sixes off Ashwin, and the magnificent man of the match efforts in semi-final and final of World T20 in 2009 etcetc. He, by hook or crook, finds various ways to set the stage on fire. During his batting, everybody in the dressing room – both the team he plays for and the opposition – were seen biting their nails as nobody had the surety of what is coming from him. 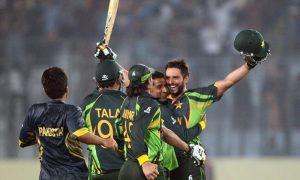 Therefore, you can criticize him for his underachieving career, you can raise eyebrows for his below par averages, you can blame him for countless games Pakistan lost due to his irresponsible batting or raise fingers for his indulgence in controversies like ‘ball biting’. But one thing is for sure, cricket will never see a player who is synonymous to the word “entertainment” once he bids adieu to all forms of the game. Nowadays the charity work Afridi is doing – through the platform of ShahidAfridi Foundation – for under-privileged people in remote areas of Pakistan will not only increase his star power but will also take his stature to whole new level.

So, for the ongoing PSL, we can only wish him ‘hope not out’.

Do famous journalists have impunity to discard journalistic ethics?