It’s not easy being green… or is it?

Boom! Boom!’the deafening echo sounded all around, the screams erupted in overwhelming unison creating a scene of pure restlessness and chaos. It was violent and exhilarating at the same time. After all, Shahid Khan Afridi was finally coming to charm the onlookers with his undeniably spontaneous aura. What did you think it was? Oh right. Do I see a stereotypical view fogging your better judgment of an utterly peaceful and patriotic event of Pakistani’s supporting their cricket team? Yes I do. 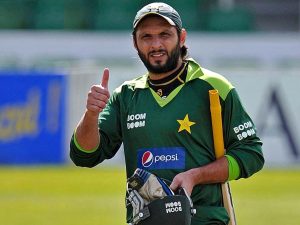 The world might be invested in much greater matters, but we Pakistanis have more issues than Vogue. Often, we find ourselves conflicted before cricket matches, deciding whether to root for our team or just support cricket as a whole (to be on the safest side). Or repeating the drill with our practiced vocals with the traditional song that goes, ‘Tum jeeto ya haaro suno humain tum se pyaar hai’, in doing so we’re basically trying to heal our bruised expectations.  Later we pour down our sentiments in status updates, claiming how predicted the win was and how proud we are of our team, and of course, vice versa. These statuses are often followed by hashtags, one of which ironically is #BleedGreen, sadly enough we are somehow always bleeding. 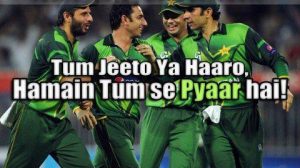 One major calamity that we as Pakistanis face – and this one let alone can be deemed as the most disturbing predicament– is how to react when India occasionally decides to play ‘phupo’. Shall we continue to watch the Indian serial we had been following for so long? Or the latest Bollywood film that we booked tickets to beforehand? Or instead reside to the walls of Facebook and voice our frustration when the channels are banned? This type of situation reminds me of a very typical scenario when one’s father (Pakistan) is not on good terms with one’s phupo (India) and you as the child (Pakistani nation) are torn between liking your cousin’s display picture or leaving it be. With a thoroughly sarcastic meaning and a bright smile on our face we do like to inform said ‘phupo’ to control whatever it is that makes them go nuts every now and then. Is that ‘nuclear’ enough for you, phupo? I bet it is.

The world, though is yet to decipher the unfathomable truth of how much of a misunderstood nation we are and that we mean, if not any good – considering the image our corrupted politicians and their remarkable representation of Pakistan abroad has made – also not any harm. Out of all that’s happening around in our land from countless lives being lost at the hands of terrorism to incompetent policies, our politicians continue to remain in their own bubble of zero productivity. Their favourite word however seems to be ‘condemn’, which basically serves as a verbal cushion they sit on every time a mishap occurs. God help that cushion.

An emotionally unstable nation, that loves nothing more than food and cricket while being seasonally patriotic. We excel at making immaculately relatable one of a kind memes that portray our talents with the right dose of sarcasm and humour, and not to forget ‘naans’, the famous Nutella Naan to be precise, which is only hostage of a bite!

All of the criticism has really made us considerably immune but what we really want the world to know is that, “We make memes, not war” or better yet “We make naans, not terrorists”.

Fatima Altaf is a student of Mass Communications and Political Science at FC College. She incorporates sarcasm and humor in her writings.