These Asma Jahangir quotes explain why she was a peerless champion

Why mourn Asma Jahangir’s loss? Simply because, genuine shepherds of the oppressed like Asma Jahangir appear once in a lifetime! Irrespective of who she met across the border and her own religious background, these are her quotes that every Pakistani with a conscience would admire: 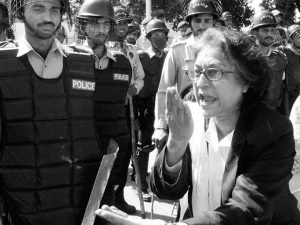 Her passion for legal work is apparent here when she says: “Courts were not new to me, even before his detention (for opposing martial law), my father was fighting many cases. He remained in jail… But we were not allowed to go see him there. We always saw him in courts. So for me, the courts were a place where you dressed up to see your father. It had a very nice feeling to it.”

“When we were children, he (her father) always talked about fundamental rights and adult franchise and, believe me, I did not know for a long time what adult franchise meant except that he was fighting for it.” 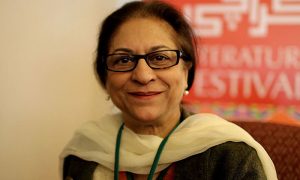 Her clear understanding of our society’s affliction is summarized as, “We may fight terrorism through brute force, but the terror that is unleashed in the name of religion can only be challenged through moral courage.”

Her immediate concern was for her own people when she outlines her priorities, “Yes, I am very unhappy, extremely anguished at human rights violations against Kashmiris in India or against Rohingyas in Burma or, for that matter, Christians in Orissa. But obviously, I am going to be more concerned of violations taking place in my own house because I am closer to the people who I live with. I have more passion for them. And I think it sounds very hollow if I keep talking about the rights of Kashmiris but do not talk about the rights of a woman in Lahore who is butchered to death.” 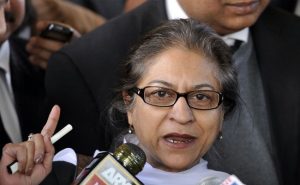 Her clearheaded vision for the country when she talks of institutions, “However flawed democracy is, it is still the only answer.”

She single-handedly created an institution for Pakistan, “There was a time when Human Rights was not even an issue in this country…women’s right were thought of as a western concept. Now people do talk about rights — political parties talk about it, even religious parties talk about it.” And “the government of Pakistan (says it) is committed to human rights. I wonder whose?”

Asma herself narrated the story of the time when she asked a woman with five children (seeking a divorce) whether she was ready to assume the life of a single mother. The woman said, “Many women have been killed in their marriages, have you ever heard of anyone killed in their divorce?” On another occasion, a bonded laborer once explained what he was fighting for, by saying: “I’m not asking for food. That I can get in jail. I’m fighting for my dignity, which is priceless.”

“In bonded labor cases, judges would ask me why I had brought those people to the courts that stank. You are here precisely for them, I would respond”.

Once she jumped in front of a small group of protesting youngsters about to be brutalized by the police, and shouted to the police, “What the hell do you think you’re doing?” these are kids, not terrorists. Go on, get lost.” Shocked, the police duly skulked away.

She was in touch with reality when she said, “(In Pakistan) Justice is a rare commodity.”

“The way [Pakistan’s situation] will improve is not going to be because of the government or the elite leadership, or the political leadership, or the institutions of our country, most of which have actually crumbled. It will be the people of the country themselves who will bring about the change in society because they have had to struggle to fend for themselves at every level. Public opinion is key to the survival of democracy, to educate people about what democracy is all about’. 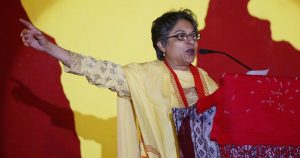 “They have done everything to intimidate me. They have even turned on my two daughters. I have had to send them out of the country. Sometimes you have to pay such an unbearable price for what you believe in.”

She raised her voice when all others cowered down. She earned respect in a male dominated career path.

She challenged the status quo and spoke the languages which the downtrodden understand. She gave hope to people who lost everything and inspired others to rise above themselves.

Still no one dared touch her. That is the strength of genuine leaders. Not guns but guts! A true leader that didn’t need crutches of religion to gain popularity.

All this was done without the protection of any formal institution. This makes her daring work even more remarkable.

She was a champion of civilized causes like force disappearances, violence against women, abuse of children, forced conversions, tyranny, one-man-rule, bigotry.

She challenged despotism and tyranny of the powerful. She talked about women’s rights when people were shooting girls’ in the head.

What do we label her? Moral compass, feisty, Pakistan’s conscience, 5 ft. tall Human-Rights-giant, iron lady, street fighter, anti-fragile? Will Pakistanis be left weaker without her? Who will have our backs now?

Da sanga azadi da –What kind of freedom is this?