I have been laughing for a week now. The Kingdom of Saudi Arabia (KSA) rece 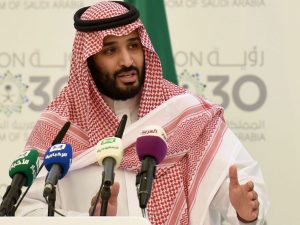 ntly declared that the 35-year ban on cinema houses to be lifted. Three decades is as long a time that the Kashmir communal separatism movement has been going on. There is still scepticism about Crown Prince Mohammed bin Salman, widely known as MBS, an ambitious 32-year-old slated to become the country’s next king, but in the larger perspective his Reforms, which include the easing of restrictions on women driving, or relatives escorting them to and fro have been welcomed.

For us Kashmiris, whose memories include the closure of cinema halls, by the diktats of the mushrooming militant groups, either by terror coercion (pamphlets, posters, verbal threats) or outright grenade attacks, the KSA news was amusing. The militant groups always deemed the cinema houses as un-Islamic, mostly because of the content shown, the mixing of the genders which inevitably the cinema courts would provide and the exposure to the world that they did not want the population to have. This Wahhabi/Salafist interpretation of Islam that overrode the soft, Sufi/Rishi/Shaivite strains of Islam prevalent in the continent since the medieval times, swept the Valley like wildfire in the 90s, ultimately culminating in the forced exodus of the ancient Kashmiri Panditneighbours, the secular/agnostic Muslims and Sikhs.

Within a few days of the KSA cinema ban uplifting, our very own Veer Savarkar (read stooge colonial stooge) who manages to glean a large following of similar Wahabbi/Salafist minded nationalists, Syed Ali Shah Geelani, expressed his dismay in all the mouthpieces of the Islamist intifada narrative of the Valley. According to one of them, the Greater Kashmir, ” …opening movie theatres is an un-Islamic move. It is against the norms of Islam and keeping in view the sanctity of these places, the move is quite disheartening and unacceptable.” 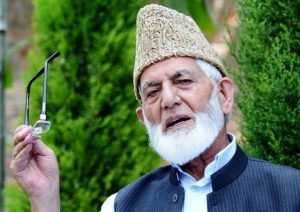 Cautioning about the consequences of this move, he added, that “rulers in Saudi Arabia being the custodians of the Holy places of Madeena and Mecca, need to be careful. However, it is quite unfortunate that the present ruling elite is allowing and promoting the same obscene culture which Islam has prohibited.”

Not getting into the historical inaccuracy or illogic of his statement (photography is a modern invention and the desert culture could not possibly have known what to ban when it had not even been invented) what brought out guffaws was this: if the intifada factory is to be believed, the Azadi sentiment is a Kashmiri nationalistic sentiment which India’s “brutal occupation” has managed to revive, thrive and flourish.”

Never mind, that the Kashmiri Pandits were ethnically cleansed (which is always an “unfortunate incident”); that the 90s saw the burqa and the hijab/abaya being coerced on women; that the mushrooming of mosques by the petrodollar-funded Wahhabi doctrine of Saudi was radicalizing the youth, or that the slogans for Azadi were primarily – “yahankyachalega, Nizam-e-Mustafa” – (what will prevail here, the rule of Mustafa)! 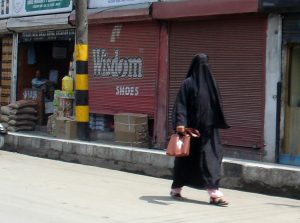 Also what is entertaining is that the very intifada factory that feeds the Islamo-fascist narrative in the Valley actually wants the Indian media, Indian cinema, Indian historians and Indian intellectuals (read Left-Liberals) to showcase their Oppression Olympics, the delusional repression of the Kashmiri Muslims “only” post-independence and so on as the Islamist narrative goes.

Of course, a case can be made of the eroding of the Special Status of J&K State on the basis of which the whole Accession to India stands, but as long as Article 370 stands (really all the freedom that can be had within a national territory) there can’t be any basis for Azadi for all the Jammu, Ladakh, Kashmir territories with its Buddhist, Sikh, Christian, others and of course the Hindu/Muslim populations. But that debate is beyond the scope of this space.

I’ll stick to the amusing hypocritical stance of the SASG, totally disconnected from global geopolitics, and is still dreaming of his authoritarian rule in the theocratic Islamic Republic of Kashmir. The Muslim World is changing drastically and immensely. September 11 did that – exposed and opened up the religion, culture, history, philosophy to insiders and outsiders in such a way that it will either end up with an Enlightenment or an irreversible Reformation.

In the more liberal regions where Islam was forced to co-exist either with other monotheistic religions or polytheistic ones or the godlessness of communism, taboo topics, unjust legislation, personal Sharia laws too are being challenged. In short, the much needed critical thinking is being introduced into the Muslim World.

Not that it didn’t exist in the first place. The Mutazalites in medieval Baghdad, the Jadidists in 19th century Russia and the Shaivite traditions of Kashmir show that it always did but the more orthodox strains concealed or silenced them and these became pockets of Enlightenment with the usual terror or blasphemy pacifier.

If there should have been any movement for Azadi, it should have been for the oppression that Muslims commit on fellow Muslims – that is an exploration for another day. In the strange tragic paradox of war, 9/11 turned out to be the push that six centuries of stagnation needed. It not only is challenging orthodoxy but also throwing up heretics – pioneers, of revolutionary thought in Islam from the obscurity of the sands of time.

I’m an average Kashmiri, from a Muslim background, who grew up amidst conservative mores and norms of a typical Muslim culture, where it was compulsory to memorise the Quran  (hifz), very little encouragement to read the meaning of the verses in Urdu or English, but absolutely a no, no to ask logical rational questions regarding the progeny of Adam And Eve’s children and how their wives came into being, the splicing of the moon, flying horses or Pacific Islanders who hadn’t even heard of a desert going to hell.

For someone who has accepted the growing and overwhelming proof of evolution, the age of the earth and the Universe, it is delightful to see Middle Eastern TV shows discussing this, or the ZakirNaik quotes being 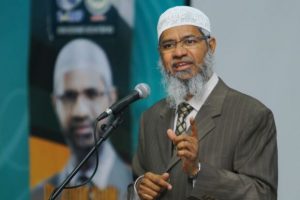 made into fun memes and the long forgotten apocryphal heretic literature of persecuted Muslims being rediscovered. From the Mutazalites of Baghdad to the zindiqs of Syria and Morocco, to Ali Dashti and his controversial Twenty Three Years, to the Jadidists in Russia under communism.

That is how civilizations are made and flourish – the exchange of ideas, language, cuisines, art, literature (heretic ones too), customs, etc in which cinema too, is an art/protest form when it is not entertainment. Cooped up in the 90s due to extended curfews, numerous shutdowns, with the advent of cable TV and eventually the Internet and mobile phones in the new millennium, I became aware of Iranian cinema, especially the father-daughter director duo Makmalbaf and my steadily growing rational mind tried to reconcile the closed cinema houses of the Muslim majority state in India (later occupied by the vast personnel of the Central Reserve Police forces and eventually reconstructed malls, hospitals and hotels) with the Muslim actors, Muslim directors, Muslim scriptwriters, etc.

It is not like the intifada factory headed by Ali Shah is against the medium totally – they are very appreciative of MC Kash rapping out his hard-hitting lyrics about jackboots of the Indian Army but will not speak up when the so-called Grand Mufti of Kashmir banned all girls-band ‘Pragaash’. They love the debut and inroads that the author of Curfewed Nights, Basharat Peer has made in Indian cinema with his co-written script for Vishal Bharadwaj’sHaider (an adaptation of Shakespeare’s Hamlet), a brilliant portrayal of the enforced disappearances and custodial deaths of men in the Valley in the 90s which shook common Indians into a reality check. Yet, they dismiss or lambast or disrupt a similar attempt by Kashmiri Pandits to showcase their forced exodus, pain and grief through this medium with the help of Left bastions in India. 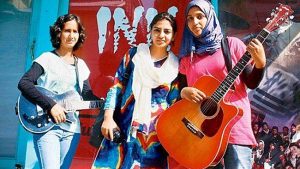 This covert censorship, the selective condemnation and promotion of narratives which fit or do not fit the Islamist agenda of the intifada factory is about to get a rude shock, as the petrodollars dry up and the Kingdom is forced into reform and is being very open about allying with Israel and quite severe on the soft theocratic-imperialism of Qatar, even as the Islamisation of Europe is underway.

The author is a Srinagar-based writer and social commentator with focus on women issues and conflict in Kashmir. She makes her living as a school teacher and is an avid collector of literature. She is currently writing a book about her life as a female in Kashmiri Muslim society.

Jinnah was the only option Muslims had at the time

Options for Accountability in Syria!

Turkish Incursion of Syria: Justified or a Violation of International Law?