She was a heroine born in a civilization of heroes. The very being of her – womanhood – was inherently anti-establishment; at odds with establishment of every kind, be it political, social, traditional, or religious. All she did was to hang in there and they trembled with fear. That made all the difference. 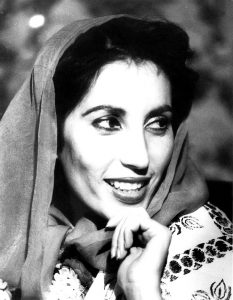 She belonged to the tribe of dreamers. She did not die because she wanted to restore democracy in Pakistan. She died because she was a dreamer. This is what dreamers do. They die. Often young.

Hers was a struggle much more monumental than that of her father. Zulfiqar Ali Bhutto rode 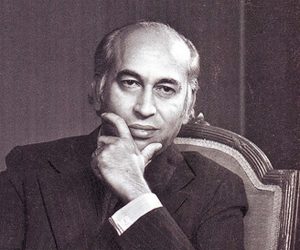 on the wave of populist socialism in the late 1960s. He was the son of his times and his dream shared by millions of dreamers living in the other parts of the world. BB’s struggle, on the other hand, was much more solitary.She lived and struggled through the time when “spring of Nations” was turning into “Autumn of Nations”. The Left was waning and the era of ideology and strong leaders was about to end. If there is one word that defines Benazir Bhutto it is resistance. The resistance against the overarching role of military in Pakistani politics and the burgeoning religious extremism in post-Zia era. She was a dreamer who dreamed of resistance, lived by it, and died by it.

Not unlike during her lifetime, she still is a highly polarized figure. Today she is either eulogized as martyr of democracy or rebuffed as a feudal who inherited the throne. The question however remains as to her legacy and relevance in today’s Pakistan. Is Benazir Bhutto still relevant after one decade? 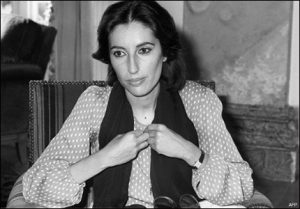 Now imagine a national level leaderreciting the following verses in a public gathering and stretch your imagination a little further and imagine a woman reciting these verses:

(These traders of religion are the worst disease. I rebel from these liars, hypocrites, and guardians of religion)

She recited this poem, written by Khalid Javed Jan, publicly many times. C 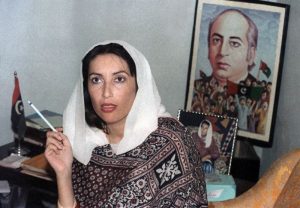 ould she have done that today? Probably not. Probably she would have insisted to recite it anyway. That’s why she is not alive today.

In recent years state has capitulated time and again in the name of mainstreaming militants, peace accords, and avoiding the backlash. There has scarcely been any political opposition to yielding the space to non-state actors. It was back in 2007 when emotions were running high in the aftermath of Lal Masjid operation and no one dared to utter a word that she was heard saying this on Britain’s Sky TV:

Her support for Lal Masjid operation was probably one of the major reasons that she lost her life. She would probably have done the same today if need be. But then she is not alive anymore. 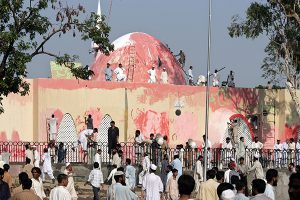 We are living in a hate-filled world today. The us vs them binary feels to be the order of the day. It takes a deep historical understanding to see through the fog of half-baked truths and it takes immense courage to see the need of introspection. In her posthumous book Reconciliation: Isla 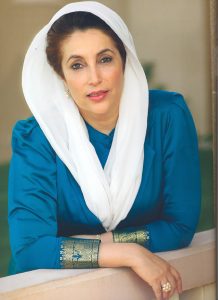 m, Democracy and the West, she writes:

“Muslims are dealing not with a clash between civilizations but rather with a clash within a civilization. The most critical battle for the hearts and the souls of successor generation of Muslim leaders, and for the passion of the Muslims around the world, is not a battle with the West… It is about the lack of tolerance that some interpretations show for other interpretations within Islam or other religions outside Islam. In other words, the real clash within and outside Islam is the battle between the past and the future.”

She got it right. It was the clash within a civilization that got her killed and not the clash between civilizations. How many political leaders can comment today on the most pressing issue faced by us with such astuteness and deep historical insight?

She came back to Pakistan on October 18th, 2007. The way the songs in the streets of Karachi turned into fear and loathing by the midnight captures the 70-year-long political history of Pakistan in a perfect manner. After midnight, she knew there was no going back. She knew what she was to do. She knew what dreamers do. They die. Often young.

Suleman Akhtar lives in Sweden. He is interested in society, politics and culture.