Bismarck unified Germany by three successful wars of aggression and made nationalism militaristic rather than democratic.Nationalism came into being as the resistance to alien domination. Irish nationalism was the reaction to English domination. Muslim nationalism in subcontinent was against the British rule. Hitler’s chauvinism was based on racial superiority of Germans over other races. He used the superiority of German industrial machine for achieving his expansionist designs and declared war against allies. The combined military power of America, USSR and Great Britain defeated Germany and Hitler committed suicide shortly after the Red Army entered Berlin.

Technically, nationalism is the ideology based on hatred.Pakistan emerged on the world map after its independence from British rule. Muslims of the subcontinent wanted a separate homeland where they can practice their religion freely.Pakistan, since its independence followed Bismarck’s model of nationalism. The enmity with India and Kashmir dispute further contributed to the militaristic nationalism. As a consequence, India and Pakistan started a deadly arms race in the region. Both sides spend massively on buying weapons. India importedbillions of dollars of fighter jets from France, Russia, and other Western nations. Currently, the United States of America has significantly titled towards India in order to contain China. Indian officials have signed a deal with General Dynamics, a US based company, according to which F16 fighter jets making plant will be established in India.Traditionally India has heavily relied on Russia for the fulfillment of its defenseneeds. IndianAir Force (IAF) operates leading Russian made fighter jets like SU 30 MKI and MIG 29. Indian Air Force inducted indigenously builtTejas fighter jet to its arsenal in 2001, but Tejas is no match for Russian, French and American fifth generation air superiority fighters. So IAF continued purchasing of advanced fighter jets from Russia and America. India’s defense budget is one of the largest in the world. New Delhi wants to pursue its hegemonic designs by modernizing itsarmed forces and also to counter China’s rise. Furthermore, Pakistan imports the major chunk of its defense equipment from China and United States.F16 falcon and JF 17 thunder fighter jets are the backbone of Pakistan Air force (PAF). F16 is US made while JF 17 is the joint venture of Pakistan and China. Many political scientists compare the current arms race between India and Pakistan with USSR and USA in the Cold War. 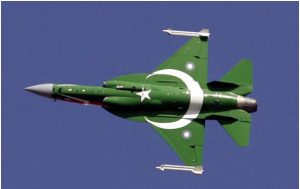 India and Pakistan both suffer from same problems. The region is plagued by poverty,extremism, unemployment and inequality. Millions of Pakistanis and Indians are working abroad due to minimal opportunities in the homeland.Both the countries need to solve all outstanding disputes through dialogue and decrease their defense spending and increasetheir expenditure on public welfare. Hindu nationalism is on the rise in India. The BJP led government has exacerbated the problem by turning a blind eye towards atrocities committed by Hindus against Muslims and other minorities. Furthermore, the cases of rape are increasing and so far no concrete step has been taken by the government in this regard. Extremists on both sides of the border do not want peace to flourish. Because peaceful settlement of all disputes will make them irrelevant.On the other hand, many political scientists have predicted the twenty first century to be an Asian dominated century. India,China, and Pakistan will experience an exponential economic growth in the coming decades. India and Pakistan are economically on the rise. India s GDP in 2016 was more than 7 percent while Pakistan’s GDP growth was 5.2 percent.According to World Bank Pakistan’s GDP growth will reach 6 percent in the coming years, highest after India and China.

Extremistelements are the biggest hurdle in better Pak-India ties. It is the perfect time for both India Pakistan to sit together and solve all outstanding issues so they can get maximum benefits from the Asian century.The major irritants in Pak-India relations are; one, Indian involvement in Afghanistan, second, Pakistan’s alleged support to Kashmiri separatist groups, third Indian support to Baluch rebels, and lastly, China-Pakistan growing ties.

Indian concerns regarding China Pakistan Economic Corridor (CPEC) should be dealt diplomatically by inviting India to take part in it. Pakistan should address Indian false fears regarding Beijing’s military expansion and tell New Delhi that the whole region will benefit from it.Extremist elements are the biggest hurdle in better Pak-India ties. It is the perfect time for India and Pakistan to sit together and solve all outstanding issues so they can get maximum benefits from the Asian century.

Instead of exhibiting self-defeating outrage over Jerusalem, the Muslim world should actively back Israeli-Palestinian negotiations