According to a study conducted by Pakistan Center for Philanthropy, the amount given by Pakistanis for charity and human welfare is around Rs240 billion.98% of our people are involved in some kind of giving.

The major share is received directly by the individuals and the rest is sent towards organizations. Among organizations mosques, and religious seminaries are the biggest recipients of the donations.

People are shy about donating to other organizations because of the trust deficit, due to lack of transparency and accountability. Rs6.9 billion went to corporate philanthropy. There are also some NGOs working for this cause. There is a need for recognition and showcasing such activities.

Many would be surprised to hear that Karachi is a philanthropic city, with highest per capita donation and charity organizations operating within. There are some amazing stories of NGOs doing innovative social development work in areas of education, health services, nutrition, eyes and kidney care. Deaf education, cancer research and treatments – the list goes on.

Apart from all this charity and donation work being carried out by the above quoted sources, another recent trend has left its mark. Based on the simplest principle ‘leave if you do not need it and take if you need’, this new trend was Walls of Kindness set up at various locations within Karachi city and in various cities. But are not these signs of kindness disappearing and losing popularity? 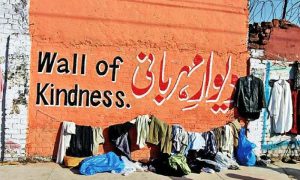 This Wall of Kindness was not just a trend settled by young Iranians in the city of Mashhad. As a matter of fact, it turned out to be a remarkable idea to help people.

It was the winter of 2015. The economy was hard hit due to sanctions imposed by international community over Iran. The situation was grave as unemployment increased; it was not possible for many to buy new and warm clothes. Without any doubt, the wall symbolized unity of the community with the central idea to help the person in need with essence of empathy altruism. This attempt caught attention of various social media platforms, it was supported and praised.

We live in era of technology; internet has already been accepted and incorporated as a fundamental tool of everyday life. And we all are linked with social networking websites. We keenly follow all international trends.

One can say in Asia, particularly after the Great Wall of China, it was the Wall of Kindnessthat really became famous. Almost every news channel did a news package on it,as it was the latest trend. These symbols were set up all across Pakistan, Karachi, Lahore, Rawalpindi, Sialkot, Quetta and Khuzdar.

But unfortunately many such walls seem to have lost their charm as commuters pass by and find them mostly empty.

It could be that the scorching heat of summer was discouraging people from managing the wall, or the donors’ concern regarding the resources being misused is stopping them from donating, but the largest problem seems to be the gradual fade away of the ‘hype’ of this ‘new’ way of charity.

One similar wall was set up at Abul Hassan Isphani Road Karachi.Being on my daily route to commute, I have seen that wall. It stands empty as many other walls are now. 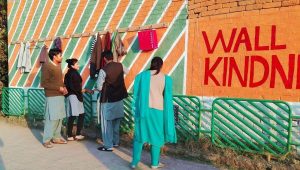 I inquired many people if they had seen any such walls in their respective areas – the answer was no. Many hadn’t even heard what I was talking about. And the few who had seen those walls reported that they are not operational any more.

Few actors came forward to set up Walls of Kindness, but the question now is: was it just a popularity stunt?

Promotions were made via social media, especially on Facebook – by far the most popular platform to advance such causes. But it was the responsibility of all who initiated this trend to make it sustainable.

Since the concept of wall was brought to public, persistence was needed to continue its effectiveness. Appealing for denotations should not be only associated to the month of Ramadan alone. Needy people require help throughout the year. 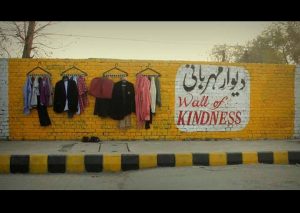 So, have you seen any operational Wall of Kindness lately?

The trend reached Pakistan in 2016, and after just a year this trend is fading away. Only painted walls are left empty with bold writing on the Wall of Kindness.

Charitable work is considered to be virtue of humanity and such trends need to be sustainable. Hopefully many of us will be reading this and would look forward to refill and decorate such walls in their localities or search for areas where such charitable work is needed for the people who cannot afford to buy clothes, specially for children.

Don’t forget to put a few toys, because poverty struck children also desire to play,while their parents can’t afford to get some for them. For them feeding the family is the first priority.

Saman Siddiqui is a blogger,writer, editor, documentary-maker and foodie. She has worked with leading news channels in various capacities. She tweets @Ssiddiquisaman