A year ago I escaped death at Regent Plaza Hotel. Those responsible for the fire still roam free

It has been a year since Regent Plaza Fire and the investigation, in order to identify the responsible for a loss of dozen of lives, has still to see the light of the day.  I reckon, I wish I am wrong, some influential people e.g., the owners of the hotel etc. would have coerced the police and civil defense not to pursue the investigation. To me, a common citizen of Pakistan, the safety lapse happened and lives lost and this matter can just not be brushed under the carpet. Hotels cannot keep on providing poor and unsafe services without any check and balance. All of the responsible for this incident, from District Building Authority, which gave NOC regarding Fire and Gas Detection System and Safety Exists, poor performance and response time of fire brigade till hotel management/owners must be brought to the book for this sheer negligence.

I recall the sequence of events on that fateful night in the hope that the state may take notice of that criminal negligence.

It was the night of the not-so-cold 4th December when I landed in Karachi. I was there to conduct a site visit on 5th and 6th December for a PSO Project, which my company was bidding for. As per the instructions from my company’s administration, the protocol officer from Regent Plaza was supposed to be available at arrival to pick me up and take me to the hotel, but no one was there. After I called the hotel several times and a wait of almost 45 minutes, someone from hotel approached me and asked me to wait since some more guests were also coming on some domestic flight. I had to wait for some 15 minutes more when we were asked to sit in a car to escort us to the hotel. 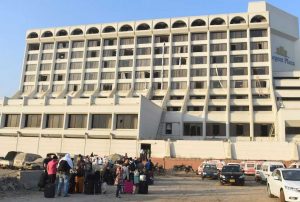 As I reached my room, I was left astonished when the lights of the room weren’t working which were supposed to turn on after inserting the door key inside the designated slot. I called the reception and requested to fix this issue. After a while an electrician came and instead of fixing the electrical system he inserted the corner of the do-not-disturb card inside the slot and lights were on. I asked him to fix it properly but, again, he laughed it away and said, sir it works like that.

I was really disgusted, but I had to prepare notes for next day’s site visit and official work so I got myself busy and planned to switch the hotel the other day since my sixth sense was reminding myself of something worst to come.

It was around 2:15, 2:30 AM when I woke up with strange noise and smell. I ran towards the door to see what was happening outside. But I couldn’t open the door fully as the whole corridor was full of smoke. I immediately closed the door in order to prevent the smoke enter the room. As I saw it from the window which opened toward the pool side, the conflagration was spreading rapidly, people were running here and there like headless chickens. I could hear the people screaming for help. I also screamed at full power of my lungs. Fire brigade was not yet arrived and the smoke in the corridor was getting intense. People were breaking the windows so that they could either escape from there or get fresh air or both. I also broke the window of my room and tried to call fire brigade and reception but no one picked the call. 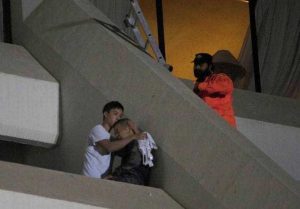 Now the situation was that I couldn’t go out of the building, from corridor, due to thick smoke and on the other hand, the only way out from the room was window where I could jump from. Please keep in mind that my room was on the eighth floor and smoke had started to come from outside as well.

Meanwhile, fire brigade had arrived and someone was announcing from ground to keep a wet towel on your mouth and nose. Now the situation was that my room was gradually being filled in with smoke both from corridor and outside and I couldn’t breathe. HVAC and Electricity which were working till now (almost two hours after the fire broke but HVAC was supposed to be tripped as soon as fire broke) and I was getting almost fainted.

In panic, I called my home and told my dad that I was about to jump from the window and that might be my last call. He asked me to wait and don’t do that mistake as it was a pure suicide to jump off eight floor. After that call my whole family was informed and almost everyone called me to forbid me from jumping out of the window. I kept on sitting on the window with my one leg inside room and the other one hanging outside.

I tried to scream but couldn’t. I tried to think of my past but my mind had stopped working. The only thing which kept on striking my mind amidst screams of people jumping out of their windows and people shouting their room numbers, those shouting for ropes, ladders and help, someone shouting about the dead bodies lying in their rooms.

It was smoke all over. I was coughing and couldn’t walk a step. The last thing I remember was falling down on the chair nearby when I heard the announcement that fire was put off. I again stood up, held my nerves and gathered my all power in my lungs to shout for help. Rangers were there on the seventh floor who heard my voice and rushed towards eighth floor. They opened the door and dragged me out. The intensity of smoke was reduced significantly when I was rescued and shown the way of emergency exit.

How I came down, sat in an ambulance, reached Jinnah Hospital, got nebulized, got my mobile phone stolen from hospital, discharged from the hospital, reached hotel again and struggled to get my luggage where people were crying and shouting and fighting with management since they had lost their luggage and loved ones…

The whole hotel seemed to be burnt into ashes, but the management of hotel was acting like nothing serious had happened. The voice of man still echoes the hell out me who was pleading the hotel management to help him find the dead body of some of his loved ones lying on fifth floor, but was being paid a deaf ear. 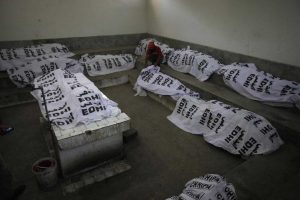 Now the hotel was being washed, police had gathered, civil defense and firefighting teams were arguing with hotel management to collect the evidences and to find the root cause of fire, whereas hotel management was non-cooperative with the authorities. Sitting in a semi burnt room they were arguing that each and every fire and gas detection and firefighting system was perfect.

Hopeless, I was thinking if the responsibility will ever be fixedor the blame will be on either late coming of the fire brigade or human error of the poor chef?Will the state ever prosecute the real responsible person/ department, who approved the hotel to function when:

Since I am an engineer and have hands on experience of the F&G system, as per standard, fire retardant cables are used in fail safe manner as to activate the alarm when loop is broken. So if the hotel management says that the alarm didn’t work due to electrical cables or alarm system burnt, it is criminal to use non-rated cables on their part.

Moreover, where is the tax payer’s money going when there is no proper rescue system available in the metropolitan of the 20 million residents? We don’t have rescue helicopters,well maintained fleet of Fire Brigade with sufficient Fire Tenders, proper ambulances with fitted oxygen and rescue equipment e.g., masks etc.

Wahi Pandhi is crying out for attention