The Faizabad capitulation has set a dangerous precedent

Mugabe’s thirty-one-year rule came to an end with abrupt coup, followed by his house arrest and installation of Emerson Mnangagwa.Emmerson’s presidential career started on the shoulders of the military.

These phrases are very familiar to Pakistani politics. Military intervention (direct or indirect) in political affairs is a usual practice.

Pakistan has inherited the parliamentary system of England, which has taken a commendable stance on American President’s anti-Islamic retweets. In the meanwhile, the Parliament of Pakistan has given or no importance to the matter, helping other forces cash in much appraisal.

The recent fiasco in the Islamabad sit-in was cooled down by the intervention of military.Instead of seeking help from the parliament,the government’s stance was very ambiguous, ultimately leading to an agreement between the protestors and government with ISI Major General Faiz Hameed as a guarantor.Renunciation of state’s responsibility gave room to the forces to fit in the created vacuum.

Tehreek-e-Labaik Pakistan was formed on August 1, 2015. Party leader Khadim Hussain Rizvi is an admirer of Mumtaz Qadri.Mumtaz Qadri, an Elite Force commando convicted of killing former Punjab governor SalmaanTaseer, was executed at the Adiala Jail in 2016. 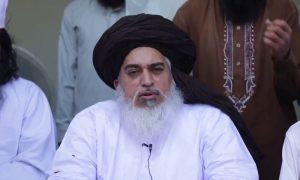 Khadim Hussain’s name was included in 4th schedule because of hate speeches.His party not only got registered with the ECP, but also proved to have a strong support.

This religious party has strong political roots after NA 120 and NA 4 by-elections.  TLP’s Sheikh Azhar Hussain Rizvi bagged 7,130 votes in the by-election of NA-120 and stood third among the candidates of other political parties.TLP also managed to get 8,218 votes in NA-4.

From this mainstreaming to dharna episode, till the signing of a “surrender agreement”, all this has managed to achieve is bolster one faction’s stance.

The clauses of this agreement seems to be above the laws of state. 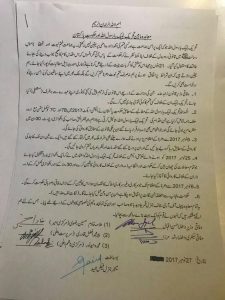 Clause 3 of the document says that “All activists of TLP, who have been arrested or detained since the start of dharna from November 6 should be released within 3 days”.Clause 5 states that the damage to “public and private” properties from Nov 6 should be compiled and the financial loss in this regard be borne by the federal government.

Section 152 of PPC (Pakistan Penal Code) is about assaulting or obstructing public servants when suppressing riots, and the punishment is three years or fine, or both. During the dharna clashes two sub-inspectors after being kidnapped were brutally beaten; the punishment of kidnapping in accordance with PPC is seven years with fine.

Protesters were also reportedly involved in the cases of theft,damage of public property,etc.

Withdrawal of the cases on the one hand has decreased the morale of the law enforcement agencies (Police, FC), on the other hand it will invigorate other groups or non-state actors to go against the institutions of state and law. 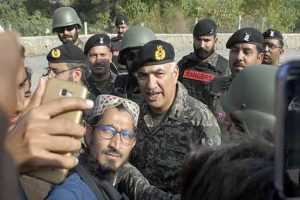 Furthermore, Article 9 of the Constitution of Pakistan assigns the state duty to ensure life and property of a person.

5,000 people were allowed to hold 4.5 million people hostage, during 21 days of sit-in.Life was obstructed, deaths were reported including that of a child. Education institutes were closed, daily wagers conditions was lamentable.

NAP (National Action Plan) seems to be a dead letter.

The surrender deal raised many questions regarding the credibility of ongoing military operations.

Is the state still indulged in the policy of appeasement?

Does the deal justify what America, India, Afghanistan opine about us?

Has it not incited extremist elements to sabotage CPEC?

Where is the writ of the state?

Are we again heading towards the situation of “state within a state”?

The deal has also encouraged internal rifts, which would arise within the Sunnis. The fear of tension among them persists, as one group would strive to dominate the others.

History is repeating itself;the journey from mujahideen to Taliban has cost a lot to the nation.

And yet, it’s still too early to say how much time it will take to travel from the unambiguous position to a clear stance in this regard.

Zainab Sohail is a lawyer

RIP, the writ of state in Pakistan