We are burning our future, our children into ashes. And we’re not even sorry

Although we have, in theory, abolished human slavery, recognized women’s rights, and stopped child labor, we continue to enslave other species who, if we simply pay attention, show quite clearly that they experience parental love, pain, and the desire for freedom, just as we do.” – Ingrid Newkirk

“Children are our future” this sentence repeatedly falls on our ears but as far as its veracity is concerned, the situation is bleak for this part of the world called Pakistan.

Once upon a time England was also plagued by child labor. Williams Blake’s poem The Chimney Sweepers depicts a dark picture of 18th century England.

That dreary and dismal phase has been over for England since long but Pakistan remains bedeviled by child labor in different forms. Unfortunately, the only sphere where Pakistan has shown an improvement in its rank is child labor. According to a DunyaNews report “Pakistan has been ranked third in the world for having the largest children’s workforce” (31 March, 2016). The irony goes beyond this; there aren’t any ‘official’ statistics available, because the last survey on National Child Labor was conducted 21 years ago. 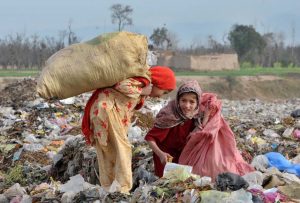 According to United States Department of Labour’s Bureau of International Labour Affairs, in Pakistan 76 percent of children in age group 5-14 are employed in agriculture sector, 14.6 percent in services and 6.7 percent in manufacturing.

The Employment of Children Act 1991 was passed by the National Assembly of Pakistan. It provides the definitions of ‘adolescent’, ‘child’, ‘factory’, ‘inspector ‘ and establishes 14 years as the minimum age for employment in any “establishment” which includes a shop, commercial establishment, workshop, factory, farm, residential hotel or “factory”. It prohibits the employment of children, restricts the employment of adolescents in certain occupations and processes. It also regulates the duration and conditions of work. Since the power has been devolved to the provinces after 18th amendment, legislation pertaining labor falls under the domain of provinces. The provincial assembly of Khyber Pakhtunkhwa took the lead and passed the Khyber Pakhtunkhwa Prohibition of Employment of Children, Act 2015.The province of Punjab followed the suit and came with The Punjab Restriction on Employment of Children Act 2016. And then the government of Sindh woke up from slumber as well and passed Sindh Prohibition of Employment of Children Act, 2017. The provincial assembly of Baluchistan has yet to decide on the matter. 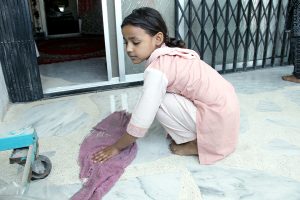 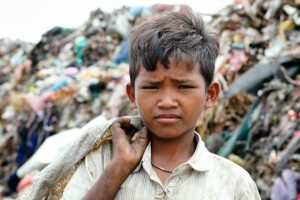 The story does not end here; the existing law does not provide any remedy for millions of those children who are assaulted and abused every day in domestic settings. According to ILO (2004) there are 264,000 children in Pakistan working as servants and maids in homes. There is no ‘law’ for them.

Where to shift the blame for this ruthless apathy? On the government that passes and promulgates laws but fails to enforce them? On the cruel circumstances and poverty that makes these innocent souls dehumanized objects? Or on those vile creatures that destroy their future? There is no answer and as Chuck Palahniuk said ‘The answer is that there is no answer’. The greatest tragedy is that we are burning our future, our children into ashes – and we are not even sorry for that!

Sidra Nawaz holds a Masters degree in English Literature and is a member of Amnesty International.

Faizabad Operation: If the authorities don’t regain control at the earliest, things could get out of the government’s hands