“If you see something say something” is a phrase the meaning of which most people are unfamiliar with. In United States, I saw it affixed everywhere in the academic and professional installations I have been in. The same notice is affixed on the walls of Blackstone School of Law in Lahore to encourage awareness about speaking out. Something that is an extreme need of the time in Pakistan.

Although aware, not ever before did this little phrase make so much sense until right under the sign, in front of an orange-ish peachy wall there he sat on a green revolving stool, dressed in a neatly ironed white shalwar kameez with a printed handkerchief peeking out from the top pocket of his black waist coat. 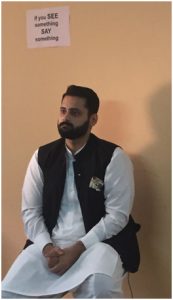 Jibran Nasir is someone I think a lot of people know as a hero,but he humbly disagrees. Until today, I too had only read his posts or tweets, saw him making various news – including some ridiculous made up ones he throws his head back and laughs at – watched videos and shows he appeared in where he was seen concerned, happy and/or often furious. Whatever he may have been feeling at the time it was all seemingly emerging from his immense love for his fellow citizens and his passion to do the right thing.

But today it was different, today he came alive when he came to talk to the students of Blackstone School of Law, some of whom were not aware of who he is at the time. It was a big fan girl moment for me but of course, he doesn’t know that. He is humble, straightforward, very kind, open and very comfortable to talk to.

To make it more cultural, simple and a comfortable environment, the school had arranged a floor seating for the event with just two rugs and a few floor cushions randomly thrown on the floor. Some sweets and nuts for snacking were placed in an oversized round bronze plate from my mother’s collection along with a couple of other oversized antique decorative items. Men in the attendees happily dressed in shalwar kameez for the occasion to match the simple decor and his assuming choice of attire.

“We can have a poetry session here” he said when he was welcomed to a low seating stool. While everyone was sitting down he asked all students holding phones in their hands to put those down and focus on what they were here for, instagrams can be updated later. Everyone complied.

Jibran shared some sweet and some not so sweet memories and experiences of his activism journey with the crowd. He defined the difference between empathy and apathy taking the audience through the earlier days of his activist life. He showed them how a normal human being is fully capable of transforming so drastically for good and humanity if we think about something more than just being indifferent. He talked to the students about catharsis and how to channel our energy generated by our emotions in a positive way, by doing something productive be it a rant on social media or collecting money for donation to rebuild the lives of the people of Abbas Town in Karachi in 2013.

He walked us through his life journey from having worked as an attorney to being let go, from contesting elections as a common man to being evicted from his rented residence along with his family when he started his journey through activism. All that was for him to relate to all the keen and ambitious law students sitting there listening to him and not to glorify his efforts and sacrifices.

He talked about how to open our minds towards other people around us indiscriminately and change our perspective about ourselves and about other people’s lives. He described how we have come to accept that there are no boundaries in disrespecting others, we make fun of others and judge them because we have a better social status than them. We have to question the kids who burnt Mashal Khan in the university. Educational institutes aren’t supposed to teach you that, but the opposite. “Your privilege doesn’t make you better, it makes you responsible” he said.

As attorneys how significant it is to have an open mind and expand your horizon. “We are all lawyers, we are taught to read, understand, translate and interpret laws, look out for the inconsistencies; look at law from the perspective of rule of law, look at it through the constitutional lens, look at public good,” he said. He told the students “your activism and giving back to the community as a lawyer is your catharsis.”

What was supposed to be a 45-minute event, turned into a three hour talk and discussion session between three cups of cold tea. Not once did he appear tired of talking or showed any signs that he was bothered. Not even when he asked a probing question that surely stimulated everyone’s brain but turned into a very passionate discussion about harassment particularly sexual harassment.  He listened to everyone’s opinion, took and answered everyone’s questions, in a heated topic like harassment, some things got lost in translation with no significant damage. I even asked him to let me finish my thought and he did, that too without a single frown.

Before leaving he graciously took a selfie on request of a few students and signed a broken mug for another that was given to him by Jibran and broken by that student’s silly cat. He spent few more minutes with us and barely made it to his next appointment, but never did he appear that he was too important for his or our time.
After his departure, students appeared very energized. It could be the euphoria or just the excitement of no classes post event. Some said Jibran reinforced all the ideas they had somewhere in their mind, some said I now know how to express my opinions to the public, some said it was great experience to interact with him live and it’s okay to disagree and one said, we are all too scared all the time, I have learned that we should just grow a pair.

“Speak responsibly, your words may not carry weight but they will still have an impact” –Jibran Nasir

Faiz is, and will remain, Pakistan’s greatest poet