A plea to the nation on Iqbal Day

Days certainly are not distinctive on their on –it is the being who often makes it special through momentousness of their efforts. For decades, November 9 has been celebrated as a symbolic day in the remembrance of Dr. Allama Muhammad Iqbal – acknowledged as ‘Hakeem-ul-Ummah’ (The Sage of the Ummah)and ‘The Thinker of Pakistan’.\ 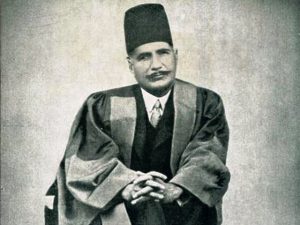 He was a great ‘Poet of the East’ and despite being famous for his poetry, Iqbal was also a great philosopher and an active politician. By now he is considered one of the most striking figures of Urdu legendary with colossal contributions in Urdu, Persian and English languages. In view of his political influences, he was the one who initiated the Pakistan movement.

On his 140th birthday today, let’s recall his everlasting words that unquestionably are an asset for the whole nation and surely will make everyone rethink their objectives in life and inner strengths.

‘Nations are born in the hearts of poets’; well undoubtedly Iqbal has ascertained what he believed then. His poetry submerges various subjects including Muslim comradeship, Islam, philosophy and much more, but the main awe-inspiring theme of Iqbal’s poetry comprises of ‘Khudi’ – the self-assertion, spirit of liberation, sense of integrity, gallantoptimism, purification of thoughts and being aware of self-power to achieve anything.

A nation that believes in it can conquer the world by the power of faith. Iqbal has forever been the greatest source of inspiration for the nation’s youth.He urged everyone to be aware of self-worth, use all the power to accomplish it and create an ocean from a dewdrop. Not to beg light from the moon; obtain it within the spark that rests within.

Iqbal’s sway to the Muslim world as the chief philosophers and thinkers of Islam remains incomparable. In his optimistic pieces of works he urged and encouraged people, predominantly the youth, to believe in self-power – arise and unclog the box boldly, that has become filthy by the trials and stress life has thrown at it.

He strongly believed in the muscle of adolescence, that only this young and warm blood can prove capable of amending the fate of their nation.

“The destiny of nations is vested with individuals. Similarly, every person belonging to the nation is its destiny’s star.”

Allama Iqbal was the one who got ahead in leading his dreams into reality since he believed in himself. He knew what he imagined about will be a reality one day as the authority of Pakistan and he left us with the lesson that no matter how much obscurity you face, never drop anticipation and steadfastly have faith in yourself. Draw out your faith firmly and elevate it with every instant, as a result things will be compelled to pace through your dreamt way.

His splendid poetry and philosophy stimulated millions of Muslims to wake up to the veracity of eras and set a destiny for themselves.

“Your world is the one which you create yourself, not these stones and bricks, which are in sight”.

Glancing at the fact we’ll come to know, Iqbal intensely chose eagle as the object of his foremost poetry and the reason behind this selection is the bravery, strong suit, self-reliance, terrific in flight abilities and distinctiveness of eagle – it also does not rely on other’s efforts.Iqbal used the comparison of the shaheen generally in orientation to young Muslims, to signify the notion of unbroken tussle with the aim of backing the foundation of serving human kind on the whole.

“You are a falcon it’s your obligation to fly high, as there are various other firmaments forward-facing you.”

“Those who rushed forward with the glory of the eagle appeared tugged of their wings and plumage; the stars of evening sank in the blood of the sunset but rose again.”

Nowadays, a majority of us some how trail the fortitude of life; we neither are aware of our accountabilities nor of the reasons for existing dilemma. The tight spot has prolonged so far that possibly at this critical interval Iqbal’s message, his enthusiastic words, workings, and poetries suffice to unite us once again, in the struggle for self-determination and justice.

Today after 70 years of existence, this probably is not the Pakistan of which Iqbal had dreamt. We probably are not what we were supposed to be. But I am pretty sure that being Muslims and Pakistanis – sharing the bloodstream of those sacrificing folks who acquired and secured Pakistan for us – we are firm enough to recoup our lost integrity.The need is to catch the spark of Iqbal’s words and act upon them wholeheartedly.

The author is a Software Developer and is interested in writing about politics, current affairs and cricket.

The mysteries of Bermuda and Atlantis