Allah Almighty says in the Quran, “Allah loves those who keep themselves pure and clean” (Al-Baqara: 222). Our beloved Prophet Muhammad (PBUH) also said “Cleanliness is half religion”. Most of us grew up having been taught the lesson of cleanliness and hygiene as half our faith. But apart from keeping our home tidy, we haven’t contributed much towards the cleanliness of society in general or to achieve high standards of hygiene. While we pretend to have hygienically high standards,the reality is contrary.

Collectively, as a society, our ability of understanding things has gone far off track. We won’t even give a second thought about spitting in front of a mosque or a church. Many people have died due to toxic waste exposure in the landfills. Many victims who drowned in drainage lines were not rescued in time due to excess of solid waste in those sections. Water contamination due to toxic industrial waste is also contributing to serious diseases in the population.

According to a report published by World Bank, the global waste generation is expected to be doubled by 2025 than it is today, reaching approximately 6 million tons per day by 2025. Due to increased solid waste, the countries where population is increasing rapidly, are likely to face major challenges in terms of health, marine life, drinking water and infertility of agricultural land etc. Germany, Austria, Sweden, Denmark, United Kingdom, France, United States and many other developed countries are making tremendous efforts in solving waste management problems by recycling waste into energy and other products of a wide variety.

In Pakistan, due to absence of active awareness campaigns, most of us cannot discern the difference between domestic waste and intensely hazardous commercial waste. There are many landfill sites which are not in the landfills list of the municipalities. Such sites are contributing a lot to environmental pollution. It’s horrific that most of the waste in urban areas of Pakistan is carbonized in the typical way of setting it to fire, without any apparent safety measure.

The plans for the recycling of waste management on most landfill sites in Pakistan are under consideration. The Lahore Waste Management Company, in 2016, initiated a joint venture with Istanbul Municipality to recycle waste in the Lahore region. The Pakistan Environmental Protection Agency has also presented numerous guidelines like waste collection mechanism, landfill levels and structures, cost reductions and public participation for improving the waste management crisis in Pakistan. 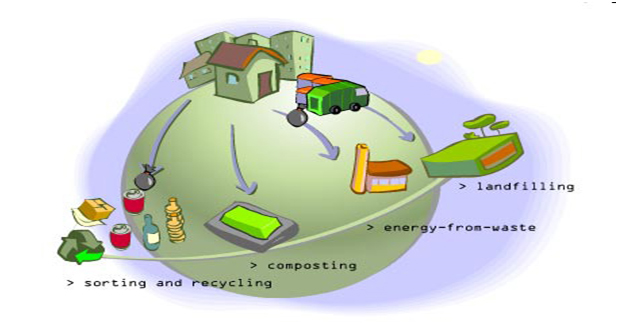 For effective waste management, there is a whole range of processes that are being used to convert non-hazardous solid waste into energy, for example, the combustion process, thermal treatment, pyrolysis, and anaerobic digestion. However, it appears that, in the developing countries, solid waste management isn’t given much importance and is not on the priority list of most governments. By focusing on such technologies, the developing countries can significantly lower their energy cost and can contribute significantly to lower the green house gas emissions as well.

It can be concluded that the growing waste and its management is a global issue. Many efforts are underway at the government level to tackle the waste crisis in Pakistan through adequate resource allocations and implementing various techniques and technologies. It is an obligation on all of us to contribute to the cause of a clean and hygienic society for ourselves and our future generations. Children can be acquainted in schools about littering and its side-effects or by conducting specially designed awareness sessions to teach them the benefits of a waste-free society. There must also be austere regulations for industrial and commercial offenders in the regard.  While the technology to recycle the solid waste is quiet expensive,it’s also a great business opportunity for entrepreneurs to invest in.

It’s about time we put our heads down to play our part in contributing towards a clean Pakistan rather than just cursing the government for inadequate resources and incompetency. With a clear vision, proper follow up, acceptance of responsibility by the public and government and a well devised plan, we can achieve a clean and hygienic Pakistan.

The author is a University College Birmingham grad and is currently associated with a school in Gujranwala.

Pakistan’s quest for her Solon

Climate change in Pakistan: from food surplus to food deficiency