Some fascinating days in Beijing

Beijing, an interesting city with a blend of old and modern China, appeals to those who love peaceful environment in the days and wonderful silent lights at nights. Spending more time in fewer cities and countries has worked perfectly for me in discovering cultures and traits of different societies. In the end of May 2017, after a long travel from Karachi to Bangkok and then Beijing, when I arrived at Capital International Airport Terminal 3, this modern and impressive airport appealed me. The first international flight to China and Beijing Capital International Airport was of Pakistan International Airlines from Islamabad. The first thing to be noticed when we step off of a plane in a new country is the weather and Beijing‘s weather was not much different from that of Karachi. But luckily next day Beijing became wet with heavy rain and effects of pollution decreased. The city was not very impressive for me on the first day. I was blindly looking for something different or special but there was nothing except driving on the left hand side of the road and taxi drivers’ confidence, winding the windows down, by using two mobiles placed in front of them leading the routes to destinations made me remember my mobile which was snatched on the busiest Lahore road last year. Abreast of modern technology, these taxis must not have been offering transport services violating the city’s local laws; otherwise they would have been banned.

Next day our visiting sites were the Tiananmen Square, the Forbidden City and the Summer Palace. Passing by a beggar with his own music, the only beggar I came across throughout my trip, we hired a taxi and reached Forbidden City. The Forbidden City was the imperial palace during the Ming and Qing Dynasties where outside visitors were forbidden for five centuries. Scenes from the movie ‘The last Emperor’ were taken in the Forbidden City. 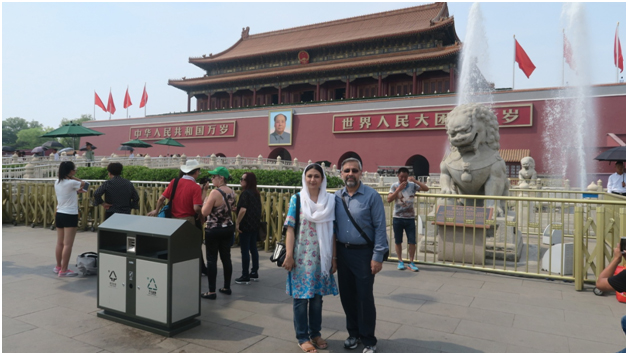 Soldiers standing guards in front of important doorways, staring straight ahead seemed very alert and active. Smartly turned out guards reflect their standard of discipline and devotion. I observed that according to Chinese ancient proverb ‘Stand like a pine and walk like a wind’, people spend much of their active time upright, so this part of the proverb rightly comes first. Our guide, a smart educated Chinese was not less than these standing guards. I rarely came across a person more active, punctual and responsible in his duties. Our next day’s schedule remained on his tips; I think all Chinese are born the same. Moreover, I was surprised to see the trees’ branches straight, standing up like soldiers. Later it was explored with deep observation that Chinese have clamped the trees to grow upward. Don’t know whether the purpose behind was to enhance the beauty or to have the timber in straight direction.

It was surprising and saddening not to see birds in variety. Maybe the pollution drives them away. One duck with her four ducklings swimming in a pool of Summer Palace fascinated us. No crows, no kites, no sparrows were seen anywhere. Being a great lover of birds I wished to see birds in Beijing but it was dramatically peaceful too not to hear sharp voices like Karachi crows at least for some days. By living in Karachi sometimes it is felt all Pakistan’s crows have accompanied in Karachi to threaten the public or they are involved in some conspiracies.

Street dogs and cats are also not seen on Beijing roads. May be they don’t get rubbish to eat as cleanliness is at its extreme. Small yellowish orange cabs with men of same coloured uniforms look busy everywhere in picking any sort of rubbish from the roads. Our guide, who was an atheist, walked for fifteen minutes only to find a dustbin near the road to throw plastic bottles.  In response to one of my questions (what push him to do good and put the litter only in dustbin as there is no God in his mind to see his deeds), he replied it was his self that forces to do good. Sometimes such incidents make us gloomy more than to enjoy in another country if we start comparing our attitudes with them.

The biggest problem which we faced in Beijing was the absence of Muslim shower in bathrooms.  At least the best hotels, malls and the airport should have been equipped with the facility of cleaning with water. Anyhow we managed this by having a water bottle with us throughout the visit. Of all the objects we have seen and admired during our visit one was the auto flush in certain bathrooms.

In recent years, China has made every effort to persuade the world that it has been rising peacefully. China has not only become the ‘World’s Factory’, but it has lifted millions out of poverty, creating one of the largest economic miracles in the later 20th century. The Chinese reputation for hard work appears to have basis. The question arises that what are the major drivers for China’s success? Obviously, the Chinese people themselves who are ambitious, hardworking, thrifty and enthusiastic for education and are learning new ways of life.  In 1872, the American satirist Mark Twain said that “a lazy Chinaman does not exist,” and added that “white men often complain of want of work, a Chinaman offers no such complaints; he always manages to find something to do.”

In 1750, Scottish philosopher David Hume said that if China were as near to Britain as France or Spain, “everything we use would be Chinese”. The remark is appropriate as China has inspired the entire world. Pakistani market is flooded with Chinese goods. Now in our shopping malls, many Chinese are seen especially in Sadder Karachi Chinese are seen selling watches, mobiles and other electronic goods. Bargaining with Chinese works but requires a little perseverance. In any country, tourists pay a premium, but the difference in China is that price fluctuates based on one’s appearance. Mostly Chinese girls are seen running shops with the remarks almost by everyone showing much love for Pakistanis. “You get special discount today; after all you are Pakistani and we regard our friends… buy anything from my shop on discount”. The kind words affect more than the shopkeepers of Quetta’s Shabnam market who tell much more than the real rates in the beginning. Chinese remind their love for Pakistanis throughout the bargaining process. By using mobile calculator, my husband converted yuan into rupees and was pleased to buy things at cheap rates but later on it was found that these things were more expensive as compared to Pakistan. 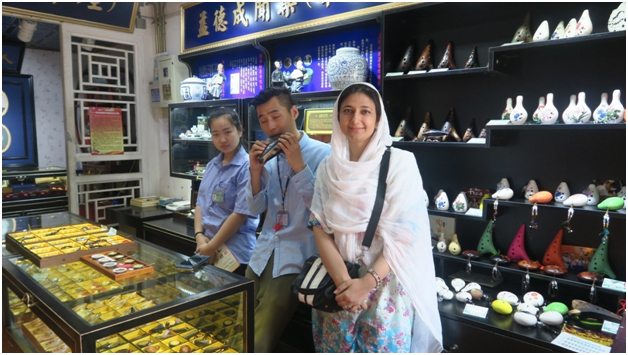 Language has been a barrier but I think this is being removed now. Most of the writings on boards, magazines and receipts are in Chinese language but Chinese are eager to learn second language. Many shopkeepers and waitresses understand English though can’t speak it fluently. If the other person doesn’t speak English, then tries to overcome this barrier and that means to maximize other communication methods, like facial expressions and sign language; at certain times it was felt as if we all were deaf and dumb. It looks like the Chinese are not fond of communicating with the world through every typed medium. Chinese government heavily restricts internet access to certain sites. YouTube, Twitter, Google and Facebook are blocked due to strict censorship laws. This had created problem for us as our email account was Gmail and anything Google related is blocked in China.

On almost every street corner in Beijing, bikes of different shapes, sizes, and colours are lined up next to one another. GPS-based apps allow people to find nearby bikes. Many Chinese have taken up bike-sharing as a replacement for the subway, or even walking. These vehicles are not to represent backwardness of a society but are helpful in solving problem of the deficiency of public transports. On the other hand, in Pakistan it is common for majority of men to get excited when they see women cycling. Street harassment doesn’t allow ladies to ride cycles freely.

Spring is the greenest time to visit northern China, especially the Great Wall. Wonderful man-made attractions are rivaled by its remarkable natural wonders. Mild climate, green trees and feeling of nature every minute enhance the beauty and scope for all those who love nature. China is planting huge strips of trees to stop the Gobi Desert. It is the world’s largest emitter of greenhouse gases, but it is also engaged in a massive tree-planting program. On either side of the zigzag track of Great Wall, apricot and other fruit trees can be spotted anywhere. It was all breezy and cool due to rain. All places were packed with people and I could hear people speaking all kind of languages. It was our guide’s wise decision to hike the Wall during the weekdays instead of weekends. Travel and change of place impart new vigor to the mind.

Parachinar incident: Social media being used to brew conspiracy against Pakistan and its army

Exploring The Exquisite Sights Of Turkey