The King of Clay does it again

There was a Spanish boy who once dreamed of winning just one French Open title. Now that boy has ten. Yes, I’m talking about the legendary tennis star Rafael Nadal, who on Sunday outclassed a quality opponent Stan Wawrinka by 6-2, 6-3, 6-1, in two hours and five minutes. No other men’s tennis player has won more than seven singles French titles. King of Clay has written his name in the history books after winning a record tenth French Open title. Now Rafa has 1 Australian Open, 10 French Open, 2 Wimbledon, 2 US Open titles and it’s so not normal.

“I try my best in all events, that’s the real thing,” Nadal said in his interview. “But the feeling I have here is impossible to describe and difficult to compare to another place. For me the nerves, the adrenaline that I feel when I play in this court is impossible to compare to another feeling. Just for me it’s the most important event in my career without a doubt.”

A perfect pretty ending that tennis so wanted, and that’s exactly why everybody watched it. Except for Stan Wawrinka everyone enjoyed the game to the fullest. Last year when Nadal had barely been able to bring himself to watch the French Open final on TV and abandoned the 2016 tournament due to his wrist injury everybody feared that it could be the end of Rafa’s career. At that time rumours emerged that Rafael will never make his way back to the game he loved but he never lost his calm and never responded to his destructively critical haters. He managed to return for the Summer Olympics in Rio and the US Open, but the wrist was still a problem, and everyone was literally worried for him. Today we have learned one thing from Nadal: “your character defines greatness. It allows you to ignore the haters and doubters. To persevere through injury and adversity.”

Wawrinka is an amazing 32-year-old from Switzerland. He never lost in his three previous Grand Slam singles finals. He beat Nadal in the 2014 Australian Open and Djokovic in the 2015 French Open and in the 2016 US Open.

Nadal now has 15 major tournament victories altogether. Federer is a little ahead by winning 18 tournaments. There are many young men’s hopefuls including Francis Tiafoe, Hyeon Chung, Nick Kyrgios, Alexander Zverev,  Jared Donaldson etc. Tennis is so full of talented players but… but it’s the great guy’s day. Let’s not talk about anyone else today.

It’s been long since we saw Rafa play this well. It’s totally safe to say that it was Nadal’s most dominant performance at Roland Garros – the greatest clay court tennis play ever. Rafa didn’t drop a single set in his seven matches. Nadal has played French open for 13 times, he won it 10 times, losing twice (Robin Soderling in 2009, Novak Djokovic in 2015) and then the withdrawal last year. This year it was all crazy. He played 7 matches and lost 35 games. JUST 35 games. Can you believe that??? Bjorn Borg was the only player in history until Nadal’s emergence who dropped only 32 games en route to the 1978 French Open title.

As a fan said, “One is difficult, two is impressive, Ten is Rafa…Only Rafa”. I was just 12-year-old when Nadal won his first Roland Garros in 2005, the year I fell in love with this game, the year of Nadal’s first appearance in the tournament. Rafa played so impressively throughout the tournament that it doesn’t seem real. He has proved one thing today: that he isn’t the greatest clay court player of all time; Rafael Nadal is Clay Court. 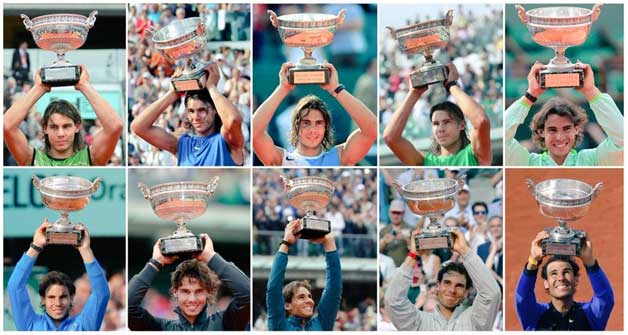 The author is a social media enthusiast and entertainer, also a passionate writer. He tweets at @ahadabbasii