The glorification of anarchy

The season of protests is yet again upon us. Some political parties and their loyal workers have geared up to lock horns with the might of the state in order to enter into a series of demonstrations without having any bit of idea of the effectiveness of the very strategy or its expected span.

I won’t be justifying whether the idea of initiating countrywide demonstrations is right or wrong but what really forced me to pen this opinion piece was a picture I witnessed the other day while scrolling through my Facebook timeline. The picture was shared (and most obviously produced) by a Facebook page that had sympathies with the political party leading the anti-Nawaz, anti-government protests.

The image was a combination of former Libyan Prime Minister Muammar Gaddafi’s pictures. One of the images showed him while he was alive and in-power whereas the other one attached right next to it captured his blood stained face as he was tortured to death by NTC sympathisers during the 2011 civil war. Upon these two images sat the picture of our country’s PM as the text within the picture expressed hope that fate does to Sharif what it did to Colonel Gaddafi. 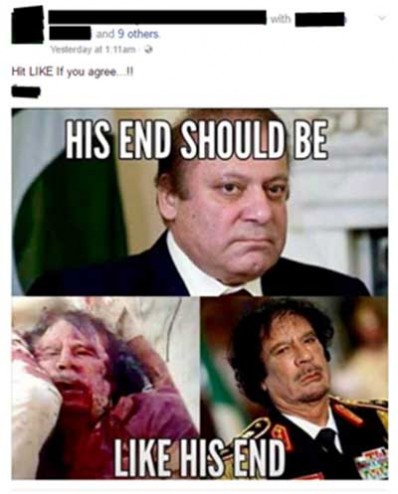 At the time of the writing of this blog, the image was shared over three thousand times through the platform of that particular page alone whereas those loyal to the certain political party proliferating the protest agenda seconded the thoughts shared within the image and expressed their hatred towards the country’s premier. However, some commentators tried justifying that an analogy between Sharif and Gaddafi was utterly wrong as the latter worked pretty hard for the betterment of his people whereas the former was a disgrace for his country.

What really surprised me was that hardly anyone condemned the image and the idea it was promoting. Not a single supporter of the political party that had the word ‘justice’ in its very name was able to point out that the thought of our country’s Prime Minister meeting a fate similar to that of the former Libyan dictator was not only unjust but it would surely prove to be catastrophic! But then, we as a nation don’t really bother caring much about such symbols or precursors, do we?

The very same Facebook page then went on to share the image of the country’s military chief along with the text expressing grief over his silence over police brutality carried out on the protestors in Islamabad as the caption indicated shock over the general’s supposed powerlessness against the government. 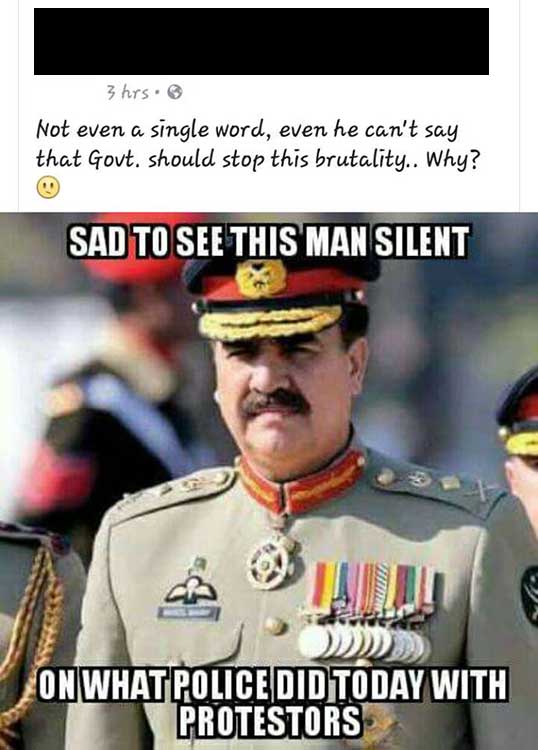 I’m not associating these images with the party or its official stance. However, such attempts do provide one with a good bit of idea of the collective mentality of a significant portion of the masses – a portion which is constantly being urged to do what it considers right whilst ignoring the idea of justice or fair play and to worry not about the consequences.

And such mentality is surely dangerous.