Terrorism has emerged as one of the greatest challenges armed forces in Pakistan have confronted in recent decades. Army is trained to fight such evils and have clear targets within the country and across the border. While the core functions of the police are maintaining rule of law and protecting public life and property within society, which is why it is not clear who is a friend. It is hard to have an exact idea who, out of the ones they are protecting, will blow them up any moment. However Police have played vital role in the fight against terrorism and successfully maintained peace by sacrificing numerous lives.

Since terrorism needs to be dealt with highly professional competency, importance of Police training has increased by manifolds. Kind of training that develops, molds, strengthens, and perfects mental faculties and character in a cadet’s life is essential. It also should edify placing group goals above your own.  Thus, Police training is supposed to educate, train and inspire the cadets for an exemplary service in self-discipline and sensitivity to the needs and the feelings of others.

Pakistan owns some of the best training institutes for cadets, one of which is Police College Sihala. The prestigious institute for training police officers of various ranks offers most modern courses as per demands of era, particularly after the rise of terrorism in the country. More than 85,000 police officers, from the rank of constables to that of Assistant Superintendents of Police, have been trained by this premier training institute since its inception in 1959.

Considering the importance of effective training in the light of modern-day policing challenges, Police College Sihala has seen a significant improvement in its infrastructure, curriculum and training strategy in recent years due to novel approach of its Competent Commandants like Aamir Zulfiqar Khan and Sohail Habib Tajik. Former Commandant Aamir Zulfiqar Khan had introduced program of trainers’ capacity building through Master Trainer courses and lectures by international experts with support of UNODC. Psychologists to monitor the mental state of the new officers and to help the officers with stress, anger, and anxiety management were also inducted during his tenure.

Sohail Habib Tajik has brought revolutionary changes in infrastructure of the college and many projects are underway. To meet the ever-growing challenges of the era, a state of the art Mock Crime Scene Area which will include Mock Crime Scene, Lecture Hall, Forensic Lab and a Model Police Station is under construction at the college with support of German Agency for International Cooperation. “Chhotu Gang” issue had been a test case for Punjab Police which proved the need of better policing in riverine areas, crucial for force. Police College Sihala has imparted amphibious training into its courses with support of Pakistan Army.  Modern Computer lab has been established for Information Communication Technology and Cellular Forensic Training. Rappelling tower, Mock Village, Assault Courses, Crevasses Crossing Infrastructure for Elite and Combat orientation training is constructed. Driving theme park, shooting and driving simulators, motorised firing range are a few more developments have also been made among others.

The improvement and modernisation of the prevalent Police training was actually started in 2009 when a special initiative, Continuous Professional Development Programme (CPDP), was introduced. The initiative envisaged the development of essential professional skills and responsible ethical behaviour that engenders trust and fosters leadership. Introduction of fresh modules like Counter Terrorism, Security and Intelligence, Media Management, Handling of Vulnerable Groups of Society, International Human Rights, Negotiation Skills and Islamic Ethics reflect some of the changes made in the training syllabus under this initiative. The college boasts the services of top of the line subject specialists including judges, barristers, doctorate degree holders and senior police officers on its panel. Known for its healthy climate, the college provides the best training environment to trainees coming from all over the country. Today it caters to the training needs of not only Punjab province but also of various other law enforcement agencies in Pakistan. Training of first batch of National Accountability Bureau’s investigation officers in chasing down the fraudulent in society is also on credit of the college.

Comments book is a true account of observations of many international delegations about Sihala Police College. “Very impressive and well-structured, this capacity and competence will fit very well in the UN context of international peace-keeping” wrote UN Police Advisor, Ann-Marie Orler. Whereas, Maria Medina Vega of US Department of Justice commented, “Very impressive training room for the forensics team, we are happy to be able to assist you with police work”. Above all, Commander of Punjab Police IG Mushtaq Ahmad Sukhera’s words show enormous gratitude and hopes from the premier training institute.

“In keeping with the fundamentally public friendly focus of police service, police training institutions globally operate with the purpose of imparting relevant professional skills to cope with increasing challenges of 21st Century. I commend the efforts of Commandant and his staff in introducing new modules such as crime scene investigation, syndicate discussions, individual research papers, geo-fencing and CDR analysis, anger-management and media management skills. I am sure it will go a long way in revolutionising the concept of police training in the country. It is a matter of immense pleasure that Punjab Police is recruiting officers into its rank and file on merit. They are inculcated with faith, unity and discipline during training and we have our wholehearted trust in these young officers that they will bring a desired change in “thana culture” and play a pivotal role in protecting the life and property of our citizen.” 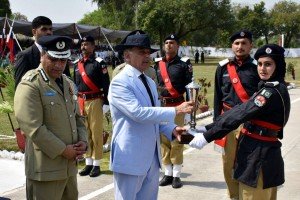 Police College Sihala is striving to become gender equal institution with inclusion of prospective female police officers in training courses, recruited directly through provincial competitive exam. Its pioneer batch had 76 women among 411 sub-inspectors hired. Gender inclusion is not the only positive perspective, excellent educational qualifications of newly hired police sub-inspectors is also something extraordinary to bring a soft and improved image of police in front of public. It includes PhD scholars, M Phil graduates, MBAs, Masters degree-holders and engineers. Whole new lot of educated, well-trained and gender sensitive officers will bring practical improvements in restoring public trust in police and inculcating a belief in officials that the police are the servants of the public, not their masters.

The institute has been under threats from criminal mafias and terror groups but is paying its duty firmly and has become the backbone of police training over the years.

The author is a social activist, artist and writer. He believes in highlighting positive aspects of Pakistan along with identifying and rectifying weaknesses.

Response to the supporters of Molana Tariq Jameel