(Security Desk) — 88% copper, 10% tin and 2% zinc awarded to men with  100% heart of gold. Yes, the description aptly describes the recipients of Nishan-e-Haider. 10 men in the history of Pakistan have had the honor of receiving the country’s highest gallantry award over the course of 69 years.

The men are well known by the posters, short films, and lyrics of patriotic songs over the course of the years.  A preview of the following poster from ’90s shows us the following:

The above figures are well known and a glimpse of their pictures will jog up your memories as to what names and achievements they have under their belts. But here is a little known fact; the list of Nishan-e-Haider has been upgraded and we have a new soldier entering in the midst of the great names among the list.

As per orders of Government of Pakistan, recipients of Hilal-e-Kashmir have been given equivalence to Nishan-e-Haider. The only person to be awarded the highest gallantry award of Azad Kashmir(AK) is Naik Saif Ali Janjua, technically the 11th recipient of Nishan-e-Haider.

Naik Saif Ali Janjua of 18th Azad Kashmir Regiment (Army Number: 68275) is the latest addition to the Nishan-e-Haider hall of fame. His name began to appear in GHQ documents in recent years and as of September 6, 2016 Inter-Services Public Relations(ISPR) has  started printing his profile on various advertisements as well, along with other Nishan-e-Haider(s).

Service before battle for Kashmir:

Saif Ali Janjua enlisted in British Army during World War II in Royal British Engineers and after 6 years of service, joined Pakistan Army at the time of partition. His first task at his joining was establishing a ‘Haideri Force’ for defence of Kashmir, a task which was completed successfully by July 1948.  He was involved in frequent skirmishes against the invading Indian Army and first saw combat in September-October 1947.

Act of Valor on Kalewa ridge:

Saif Ali Janjua was promoted to Naik in the fall of 1947 and was given the command of Platoon-I of B-Company, a distinction for the rank of Naik. The platoon was given responsibility to defend Peer Kalewa ridge. On night of October 25th 1948, Indian Army launched offensive in the area with a force of an infantry brigade (5th Infantry Brigade) with assorted tanks and with Indian Air Force (IAF) providing direct support for the ground assault.

Comparison: An Infantry Brigade typically consists of at least, 1500 men commanded by a one-star General (Brigadier)… A platoon only has 30 men.

Continuous artillery barrage followed by tanks initially over-ran the line of defence and Naik Saif Ali Janjua’s outfit was isolated from the battalion. The encirclement, however, did not deter the soldiers’ resolve as they put on a brave performance despite being outnumbered. The first waves of attack lasted for more than 10 hours, extending up to afternoon of October 26th.

Naik Saif Ali Janjua himself fired bursts from his Light Machine Gun (LMG) and kept enemy at bay for hours as Indian casualties mounted. It is reported that a low flying aircraft of IAF was also damaged, which later downed inside territory of Pakistan by effective marksmanship of Naik Saif Janjua.

Two enemy waves were repulsed by the isolated platoon since mid-night, including one in broad daylight. Naik Saif Ali Janjua, while manning his postion atop Pir Kaleva at Mehndhar Sector, got hit directly by an artillery round and embraced martyrdom on spot on October 26, 1948. Nothing short of direct hit from an artillery barrage could have stopped Naik Saif from carrying out his duties.

Naik Saif Ali Janjua was awarded Hilal-e-Kashmir, the highest gallantry award of AK, by Defence Council of Azad Kashmir in March 12, 1949. As per gazette notification(No.1/18/D/25/91) by Government of Pakistan, Naik Saif Janjua has been declared equivalent to other Nishan-e-Haider(s) of Pakistan.

A true son of soil and an unsung hero, it was high time that his achievements were also highlighted on September 6 by ISPR. This year, ISPR lived up to the expectation and the face of Naik Saif Ali Janjua appeared promptly and silently among other Nishan-e-Haider recipients.

Following is the picture of his grave at Nakyal, Azad Kashmir: 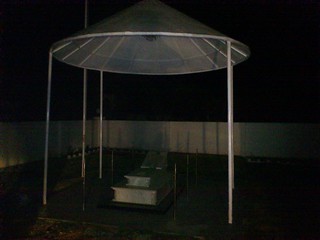 And the inscription on his tomb: 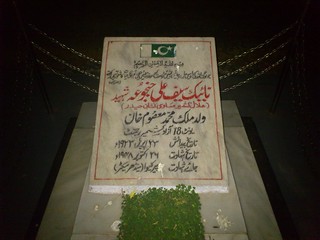 Concept of thought in Islam and Science

Is technology killing our relationships?